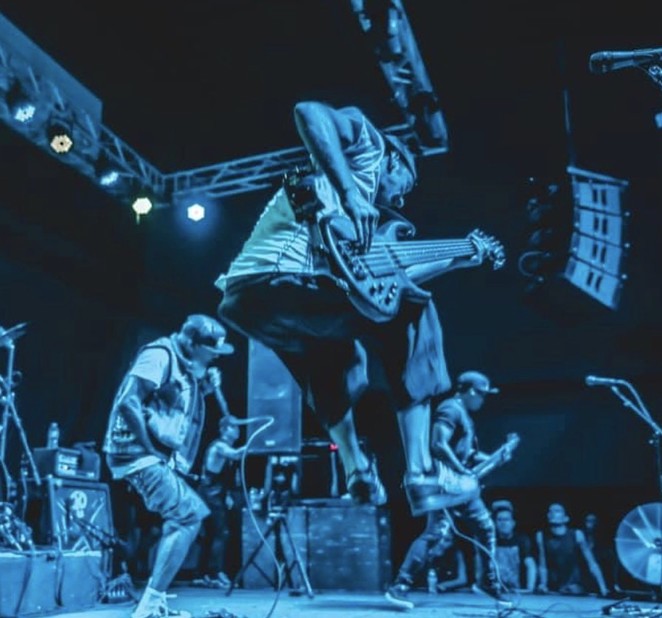 Instagram / therealhedpe
(Hed)PE will hit up the Amp Room on Friday.
If anyone tries to tell you San Antonio lacks for musical diversity, feel free to call them a big dummy.

As evidence of that theoretical naysayer's dummydom, the Alamo City will play host this week to a former American Idol contestant, an avant-garde harpist, a former Ozzy sideman, a rapper with a PhD, a nu-metal standard bearer, a quirkily named pop group from Spain and a long-running local bluegrass act that's performed with legends including Bill Monroe. So, there.

Former American Idol contestant and current YouTuber Beckham is on tour supporting his 2020 release Light Year. The album is Clark’s first full-length release and highlights his strengths as a vocalist. We’re guessing that in a live setting it will be easy to lose oneself in his soft-as-silk voice and poppy R&B tunes. $15, 8 p.m., Paper Tiger, 2410 N. St. Mary’s St., papertigersatx.com. — Enrique Bonilla

The Drums at Paper Tiger
Since New York’s The Drums became a solo act for member Jonny Pierce in 2017, the approach has shifted dramatically. Real drums have replaced programmed ones. Parental Advisory seals now feature in the album art, and the clean, bright feelings have been swapped out for Pierce’s darker, more raw writing style. This is a show you can simultaneously dance and take on the weight of heavy lyrics. $29.50, 8 p.m., Paper Tiger, 2410 N. St. Mary’s Street, papertigersatx.com. — EB

Black Label Society
Guitarist Zakk Wylde will be forever associated with Ozzy Osbourne, and it was recently announced that he’ll play on Ozzy’s pending LP. Beyond the sideman gig, Wylde made his name for himself via the Black Label Society, an outfit that’s mastered groove and Southern metal. In the band’s 20-plus years in existence, it’s released ten studio albums, and its latest, Doom Crew Inc., is due out November 26. It’s a safe bet that fans will get a preview. $39.50-$69.50, 6:30 p.m., Aztec Theater, 104 N. St. Mary’s, theaztectheatre.com. — Mike McMahan

Mexstep, Vocab, The Foreign Arm and more
San Antonio rapper Mexstep is known for literate and thought-provoking rhymes, which should come as little surprise since his day job is teaching Mexican American studies at the University of Texas at San Antonio. This show celebrates the release his new album Vivir, produced by Black Pumas’ Adrian Quesada. Expect performances from some of the artists who did guest shots on the release. Free ($5 suggested donation), 9 p.m., Lighthouse Lounge, 1016 Cincinnati St., facebook.com/thelighthouselounge. — SN

The Acacia Strain
The Acacia Strain mine a heavier sound than many of the other acts that sprung from the early 2000s metalcore scene, and its lyrics urge listeners to enjoy the nihilistic side of life. This tour, the band is giving San Antonio fans to catch it playing two different albums in their entirety during its two-night stand, which also includes a Monday, Nov. 22 gig. Expect to hear It Comes in Waves on the first day and Wormwood on the second. $20-$23, Sunday-Monday 7 p.m., Rock Box, 1223 E. Houston St., (210) 677-9453, facebook.com/therockboxsatx. — BE

Automatic Weekend
Austinites Automatic Weekend will hustle through as part of a Texas tour, bringing along an indie brand of blues and country twang infused with rock. The band recently recorded new material and teased a shift in direction that includes some accordion in the mix. $10-$55, 5 p.m., Sam’s Burger Joint, 330 E. Grayson St., (210) 223-2830, samsburgerjoint.com. — BE