Live Music in San Antonio This Week: The Last Bandoleros, She & Him, D.R.I. and more 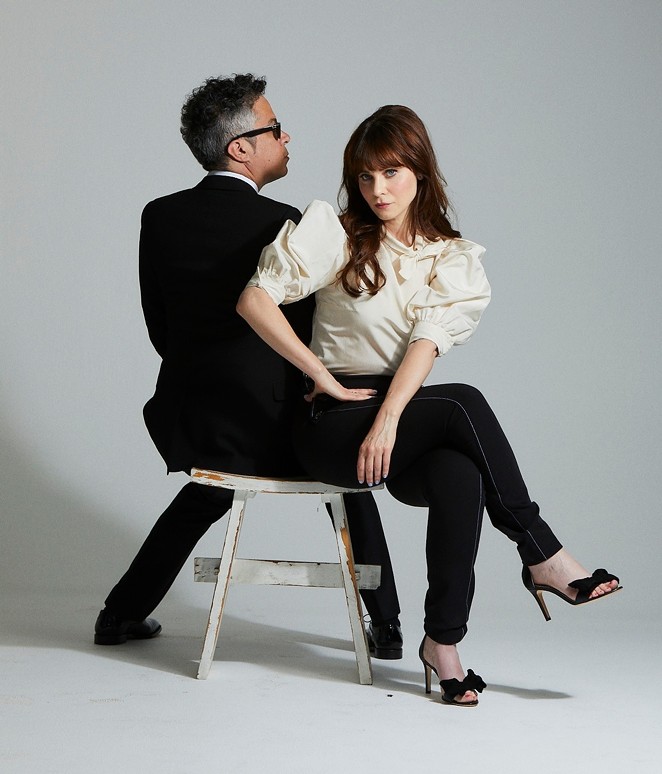 Courtesy Photo / She & Him
She & Him will perform at the Aztec Theatre on Sunday.
The holidays are already upon us, along with their attendant music. If those yuletide tunes are your jam, you're in luck.

San Antonio jazz staple Doc Watkins will tickle the ivories in a live tribute to Vince Guaraldi's timeless soundtrack to A Charlie Brown Christmas, and pop duo She & Him — featuring actress Zooey Deschanel — will perform a setlist that's likely to feature plenty of holiday faves.

If you're not yet ready dance your way through a marshmallow world, you're also covered this week. Ukrainian metalcore pummelers Jinjer, Tex-Mex rockers The Last Bandoleros and pissed-off thrash pioneers D.R.I. are all poised to serve up performances that will — it's a safe bet, anyway — be free of Christmas carols.

Jinjer
Riding a wave of hype that’s certainly earned, Ukrainian metalcore outfit Jinjer is back in action after COVID-19 forced numerous tour delays. Vocalist Tatiana Shmailyuk is a relative rarity: a female vocalist leading an extreme metal band. But whatever assumptions and prejudices this generates are usually swatted down once Jinjer takes the stage. Shmailyuk and crew have held their own on tours with legends including Arch Enemy. The band’s most recent release, Wallflowers, dropped in August of this year. $35, 7 p.m., Aztec Theatre, 104 N. St. Mary’s St., theaztectheatre.com. — Mike McMahan

Doc Watkins
It’s hard to think of holiday music without thinking of A Charlie Brown Christmas. And if you love the soundtrack’s iconic “Linus and Lucy” piano line as much as the rest of us, you might want to pop in to hear San Antonio jazz pianist Doc Watkins bring it to life. The cartoon special’s Vince Guaraldi compositions are almost as well-known as the show itself. As evidence that the soundtrack has become a cultural touchstone, it’s had numerous holiday runs on the Billboard charts and was added to the Library of Congress’ collection in 2012. $35, 8 p.m., Jazz, TX, 312 Pearl Parkway, Bldg. 6, (210) 332-9386, jazztx.com. — MM

Chelsea Grin
Utah deathcore outfit Chelsea Grin somehow managed to book a whole tour despite new frontman Tom Barber insisting he won’t play shows in venues that require him to be vaccinated. If you don’t mind standing in the same room as an anti-vaxxer who’s aerosolizing his saliva every time he “bleghs,” have at this one. $19-$22, 7 p.m., Rockbox 1223 E. Houston St., (210) 677-9453, facebook.com/therockboxsatx. – BE

Rockapella
This New York-based quintet sings original music and covers — all delivered, as their name suggests, a capella. The group’s music has shifted from pop to more of an R&B approach over time. However, for this set, they’ll unleash their impressive vocal prowess on a selection of holiday covers. $28-$49, 7:30 p.m., Brauntex Theatre, 290 W. San Antonio St., New Braunfels, (830) 627-0808, brauntex.org. — Enrique Bonilla

D.R.I.
Houston-formed crossover thrash legends D.R.I. are returning to town — and just in time to kick your ass in the pit before you’re forced to deal with Aunt Sally at Christmas. If your family sits you at the kids’ table, at least you’ll be able show the young ones the gnarly cuts and bruises attained during the band’s ultra-moshable song “Beneath the Wheel.” $15-$19, 7 p.m., Paper Tiger, 2410 N. St. Mary’s St., papertigersatx.com. — BE

Speed of Sound in Seawater
Sacramento, California’s the Speed of Sound Underwater blends catchy indie-pop hooks with technical and impressive riffing that owes an obvious debt to math rock. The band was inactive for a few years and only recently became a touring project again. Standards, Cliffdiver and Donella Drive will open the all-ages show. $13-$16, 8 p.m., 1223 E. Houston St., (210) 255-3833, facebook.com/VIBESEventCenter. — EB

She & Him
Comprised of avant-Americana singer-songwriter M. Ward and actress-singer-songwriter Zooey Deschanel, She & Him mine a vintage pop sound that also incorporates country and folk. During the duo’s 13-year run, it released the holiday albums Christmas Party and A Very She & Him Christmas. The interest in Christmas tunes seems fitting since Ward became aware of Deschanel’s musical abilities after hearing her sing in the movie Elf. $49.50-$219, 8 p.m., Aztec Theatre, 104 N. St. Mary’s St., (210) 812-4355, theaztectheatre.com. — EB

Chrystabell
San Antonio native Chrystabell is returning to her Alamo City roots for a show supporting her forthcoming album Midnight Star, which drops in early 2022. The mononymic chanteuse is known for her musical collaborations with David Lynch as well as her role as FBI agent Tammy Preston on the director’s Twin Peaks: The Return. Perhaps fittingly, her latest studio album is billed as a multi-genre “sci-fi fantasia” that weaves together elements of post-disco, synth-pop and space-age psychedelia. $12, 8 p.m., Paper Tiger, 2410 N. St. Mary’s St., papertigersatx.com. — Kelly Merka Nelson