Living And Eating With Crohn's Disease 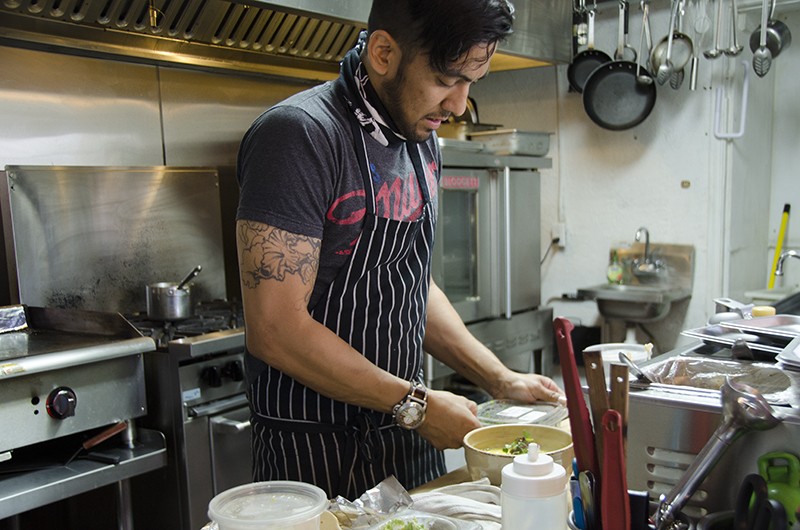 Jessica Elizarraras
David Arciniega is around food all day, but living with Crohn's Disease, his options are limited.

Growing up, David Arciniega was the athletic kind, making all-state a decade ago while playing football for St. Anthony High.

He had seemingly boundless energy.

So it came as a shock when Arciniega, now a 26-year-old San Antonio restaurant owner, ended up in the hospital for two weeks, requiring two blood transfusions and iron shots.

Then he learned the hard truth: He was diagnosed with Crohn's Disease.

Piles of work, stress, poor diet and drinking are what finally caused a physical breakdown, said Arciniega, who described symptoms of fatigue and indigestion so painful it would bring tears to his eyes.

"My schedule before going to the hospital was get my bar going, go to Alamo Street Eat and hit up Where Y'at or Attaboy and eat," he told the San Antonio Current. "That was my diet, with alcohol, no sleep and stress."

Usually diagnosed between in people during their late teens and mid-20s, Crohn's Disease (named after Dr. Burrill B. Crohn, who first diagnosed it in the early 1930s), is considered an inflammatory bowel disease.

Though there is no specific cause for the disease, patients who deal with Crohn's either have family members who also had it, or they suffer the symptoms as white blood cells go on hyperdrive and start attacking parts of the gastrointestinal tract.

"Patients would likely have had issues for a while — diarrhea, weight loss, pain. It's a pretty silent disease," said Karen Martin, a local registered dietitian who sees her fair share of these cases. A study conducted from 1940 to 2011 in Minnesota discovered approximately 33,000 new cases of Crohn's a year. Around 780,000 Americans currently live with the disease.

And there's no specific diet to abide by either, as the disease can affect any part of the tract. What makes Crohn's difficult to deal with — aside from the piling expenses of surgery, flares and medication that help suppress the immune system — is learning what foods to stay away from.

The laundry list of items to avoid includes personal trigger foods, high-fiber and high-fat foods, caffeine, nuts, seeds, popcorn (which can get lodged in fissures or fistulas and cause havoc), spicy foods, raw fruits and vegetables, especially the ones with skins, prunes, beans, dairy products and large food portions. Some patients can also be prescribed gluten-free diets.

For Arciniega, that means moderating intake of his favorite foods.

"I miss steak," the cook said while at Amaya's Tacos & Bakery, a restaurant he opened with brother Ruben in January. "I love dairy. I'm not lactose intolerant, but it was making my joints become weak. I was the type to eat a bowl of cereal in the morning, chocolate milk and a donut before work, eat things with heavy cream at work and a bowl of cookies and cream before bed."

During his two-week hospital stay, Arciniega's weight dropped from 180 to 160 pounds. Nowadays, he takes one steady medication and is able to stave off more prescriptions by controlling his diet. He's learned how to cook healthy meals, not only at Amaya's, where they carry a vegan elote soup and a veggie-filled taco, but also while working with chef Elizabeth Johnson, owner of meal-delivery service Pharm Table.

Johnson's program is based on anti-inflammatory foods and removing dairy, wheat and sugar. At $125 per week, the menu includes about 10 meals and snacks that require 10 minutes or less of prep time. The menu for the week of June 8 (they change weekly) included three soups (gazpacho, roasted potato and fennel and cucumber soup); three small plates (garlic and thyme pork sirloin, spice-rubbed Wagyu tri-tip barbecue and pulled pork with braised collard greens); three salads (zucchini, watermelon radish and zucchini hearts and turmeric-curry leaf roasted vegetables); three bowls to pair with soups; and three snacks.

Though she has picked up a number of clients affected by Crohn's, Johnson doesn't stick to one specific diet plan, but rather a different lifestyle where wheat, dairy, sugar and processed foods aren't staples.

"I've been told I have a very eclectic palate. As a chef, once you dominate flavors [some people joke it takes 10 years to get your knife skills down], you can get to the point of playing around with them," Johnson, a former instructor at the Culinary Institute of America-San Antonio, told the Current.

She dabbles in cuisines hailing from as "Blue Zones," or areas of the globe where people have shown to live the longest. Latin American foods play a huge part, as do those found in Southern Spain, Northern African, the Middle East and the Spice Route — ginger, turmeric and saffron (touted for their anti-inflammatory properties) frequently appear in her menus.

Once the disease is managed or in remission, enjoying a night out or eating out doesn't have to be a drag. Arciniega can eat most things in moderation (though one too many beers can wreak havoc) and he's picked up ways to cook food correctly to help with digestion. Beans, chockablock full of necessary iron, require a good soak to release gases and the addition of epazote or wormseed to ensure adequate, pain-free digestion.

Changing his diet, and trying to help those around him, hasn't been without sacrifices. Helping family members who struggle with diabetes has become one of his missions, even if it means getting into heated arguments.

"The amount of pain I was in made me aware that I needed to make these changes. I'm winning a few battles, but it's not an overhaul," Arciniega said.

Clay Morgan, a local attorney, is usually able to keep up with wife Erika Nadeau, who likes to check out new restaurants in town. Even though he exhibited no Crohn's-like symptoms, Morgan was diagnosed at 26 in the early 2000s after being diagnosed with Akylosing Spondylitis, another inflammatory disease. Though he's able to keep Crohn's symptoms at bay, he's careful with dietary choices.

"Over the years, I've learned I can have some dairy. I eat cheese regularly and I switched to soymilk, but if I have ice cream, it's like cheating. Sometimes I pay for it," Morgan said — typically suffering gastrointestinal issues for two to three days.

When it comes to dining out, moderation helps, but he has to be extra inquisitive when it comes to fried foods, his Achilles heel. "It depends on the type of grease it's being fried in and how heavy the breading is; tempura is usually fine."

Learning how to cope with flares is easier when patients realize they're not alone. After his initial diagnosis, Arciniega attended a meeting of the local support group of the Crohn's and Colitis Foundation of America. June's group included a varied batch of attendees ranging from a recently diagnosed 20-year-old and his parents, to the group leader, who learned of his Crohn's in 1996.

It was the second meeting for Veronica Torres, an agent at Ellis Insurance Agency. She's got ulcerative colitis, an off-shoot of Crohn's that impacts the large intestine or colon and causes the formation of ulcers.

Her diagnosis came in December after a two-month stay at the hospital. Because treatment varies on a case-by-case basis, Torres finds solace in online forums and groups. She has enlisted the help of vitamins and moderation, along with probiotics, fish oil, aloe vera and turmeric, to hold off going on immune-suppressants or steroids.

"It was a total guessing game," Torres said of the trial-and-error diet. Her 18-pill a day solution allows her to eat most things (except Malt-O-Meal, which was a no-go just a few weeks ago).

"You just have to figure it out," she said. "Everyone is so different, but it's better than the excruciating pain."