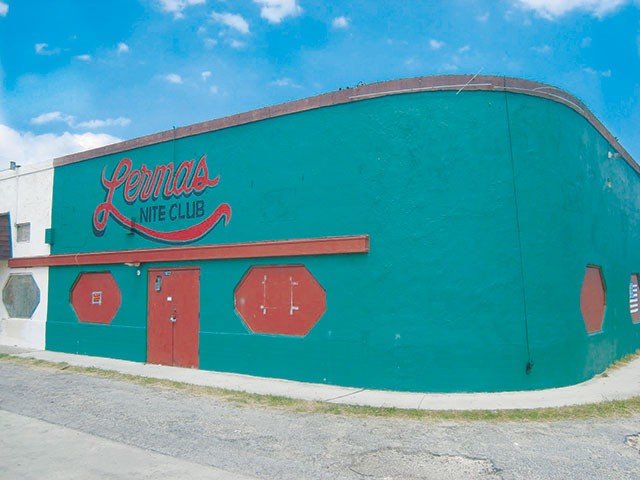 On the steps of Texas’ State Capitol last month, Preservation Texas announced that a modest, five-unit building on San Antonio’s West Side made it onto the organization’s annual Most Endangered Places list. The site of Lerma’s Nite Club, which opened in 1948 and closed in 2010—barely escaping demolition despite being considered one of the longest-running conjunto clubs in the region—should now get some much needed preservation power.

“This is the first time that we’ve ever listed a site like this,” said Evan Thompson, executive director of Preservation Texas. “It’s important to express that historic preservation is not just about architectural landmarks. It’s also about restoring social and cultural landmarks. The role that Lerma’s played in terms of its cultural heritage is a principal goal.”

Getting beyond labeling Lerma’s as mere neighborhood bar remains important for bringing national attention to its musical legacy as a home where Conjunto Hall of Fame musicians performed. Plans to reopen the building include restoring Lerma’s as a performance space, while the other units will house a non-profit recording studio, a laundry facility and a tiendita (commissary).

“Lerma’s definitely rose to the top of our list,” said Thompson. “One of the most important criteria is having an active, supportive local partner. The Esperanza is actively working with the community to come up with an adaptive use plan that supports the neighborhood and celebrates its history,” he said. “We want the city to recognize us as an economic generator,” said Susana Segura, project coordinator for Save Lerma’s, a group that helps with fundraising and outreach. “Reopening Lerma’s would also be an opportunity to create a cultural corridor in this vicinity.” Though there have been no commitments, Segura says other cultural organizations such as the Conjunto Heritage Taller and Centro Cultural Aztlan may see potential in the fifth unit.

Filmmaker Jim Mendiola, who chose Lerma’s for a Girl in a Coma music video he directed, hopes Lerma’s unique history will be preserved. “Lerma’s is like the CBGB of Chicano music. Rich in history and a punk-rock type of outsider attitude,” he said.

Although Save Lerma’s has raised $220,000 from cash and in-kind donations, they ultimately need $2.2 million, support they hope will come from the City of San Antonio and the community. In December, Save Lerma’s plans to hold its second baile fundraiser featuring Lerma’s performers. Among Lerma’s roster were Valerio Longoria, Henry Zimmerle, Bene Medina and the late Salvador “Pavo” Garcia, whose death on May 25 was an especially hard blow to the first generation of conjunto artists who performed at Lerma’s in the 1940s.

“Pavo’s death is a big loss to the Lerma’s community because he would ask, ‘When is Lerma’s going to reopen? We want to go back to Lerma’s,’” said Segura. “He was always a Lerma’s supporter, and he would tell us its history. Pavo never got to see it reopen.”