Loreta Velázquez, the Secret Soldier of the Civil War 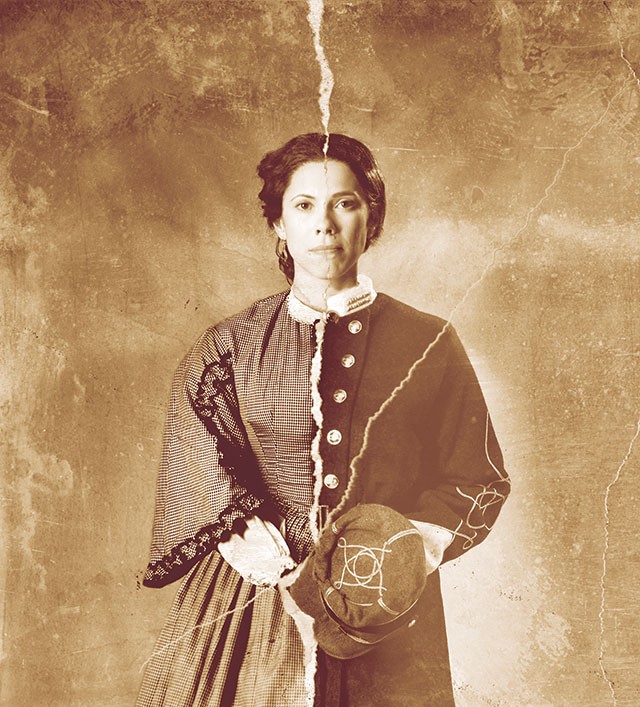 She was a woman who disguised herself as a man. She was an immigrant who believed that “in thought and manner” she was an American. She was a Confederate soldier who later became a Yankee spy. In Rebel, director María Agui Carter illustrates that limiting Cuban-born immigrant Loreta Janeta Velázquez to one set of binary opposites would reduce her contribution to American identity and history. The documentary premieres May 24 on PBS’ Voces, which showcases Latino works.

In dramatized scenes, Agui Carter shows that Velázquez — who was sent by her wealthy father to live with an aunt in New Orleans in 1849 — underwent the tutelage fitting a young Southern woman. When Velázquez later married William, a Texan, just before the start of the Civil War, she lost the support of her father who had hoped she would marry a Spanish suitor of his choosing. William became a casualty of war, leaving Velázquez with no family. The film portrays her decision to become an active Confederate soldier as stemming from these unfortunate conditions and from a childhood admiration for Joan of Arc and a desire to break women’s societal constraints.

Interviews with Civil War historians Elizabeth Leonard, Richard Hall, and Carman Cumming reveal the lax circumstances — lenient physical inspection, self-appointed militia and volunteers, and soldiers so youthful they still had beardless faces and high-pitched voices — that made her military enlistment possible. Velázquez, under the alias Harry T. Buford, became a member of the 7th Louisiana Regiment, participating in the Battle of Bull Run, and the 11th Regiment in the Battle of Shiloh, when she was wounded. During recovery, she was discovered and jailed briefly, until General John H. Winder chose to utilize her as a spy for the Confederate army. The atrocities of war caused her to rethink her position with the Confederacy.

“To be a second Joan of Arc is a girlish fantasy, which my experiences as a soldier dissipated forever,” she wrote in The Woman in Battle: A Narrative of the Exploits, Adventures, and Travels of Madame Loreta Janeta Velázquez, her 1876 autobiography. Influenced by the bravery of a slave named Bob and the deficient skills of the Confederates with whom she had served, Velázquez later became a special agent for the Union.

Agui Carter’s documentary focuses not only on the extraordinary circumstances of Velázquez’s military service, but emphasizes her much more dangerous act — publishing her memoir. The narrative’s importance is theorized by interviews with U.S. Latino literature and history scholars Jesse Alemán and Vicki L. Ruiz, who note that Velázquez’s critique of the Confederacy influenced Civil War print culture and the ideology of the Lost Cause, which cast the Confederates as brave and noble, overcome by sheer force rather than the Union’s superior martial skill.

Agui Carter draws on a critique by Civil War Confederate General Jubal Early, who discredited Velázquez’s narrative to the point of casting her wartime participation as merely that of a prostitute. Velázquez is said to have met with Early to defend her military experience, and still shots of newspaper articles chronicle her arrest and verify that she was wounded in combat.

“While we may not know everything, we can corroborate quite a bit of what she writes in her book,” says DeAnne Blanton, Senior Military Archivist at the National Archives and author of a book on women soldiers in the Civil War. The recovery of archival material has given Velázquez attention in the last decade, and Agui Carter’s documentary provides the visual culmination that brings this historical figure back from the past.