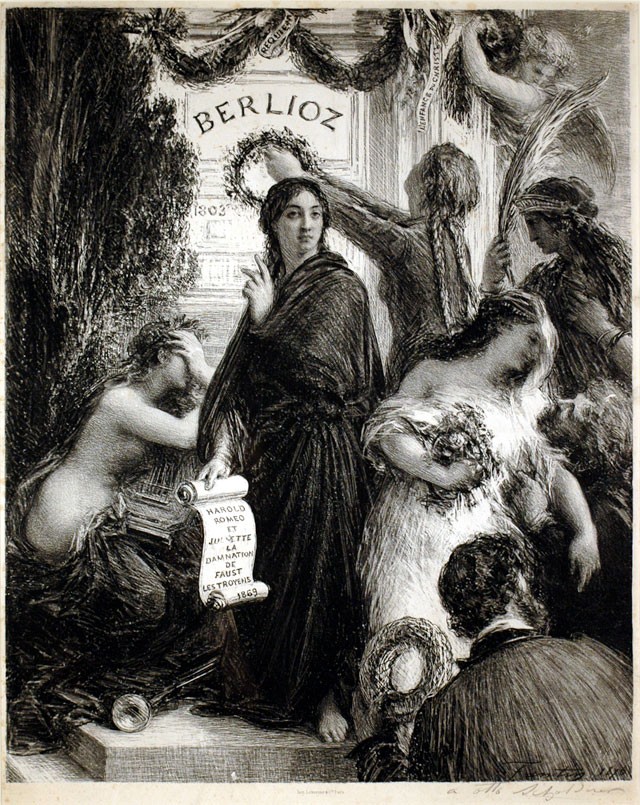 Ever heard of Storm Thorgerson? Probably not, but you've probably seen his work — it's hard to go a week without seeing a T-shirt, poster, or coffee mug featuring the iconic album cover of Pink Floyd's The Dark Side of the Moon. That simple yet intriguing image became the face of 1970's rock 'n' roll and will forever be associated with the diffraction of light. Capturing music in a visual medium is difficult, but artists like Thorgerson prove that it can be done, and done beautifully.

But our friend Storm was hardly the first to visually embody music: Henri Fantin-Latour was capturing the music scene in his lithographs nearly 150 years ago. The San Antonio Museum of Art is currently displaying over 40 of these works in the exhibition "Luminous Impressions," on view through April 7. Though the product of most of Fantin-Latour's career consisted of over 800 floral paintings, he considered his lithographs depicting music scenes to be his crowning achievements. In stark opposition to his paintings, out of 190 known lithographs only one is a floral print. The majority of the stunning pieces depict scenes from popular musical works of the 19th century: Wagner's Der Ring des Nibelungen and Berlioz's L'enfance du Christ, to name a few. Fantin-Latour's admiration for these composers washes over the viewer of "Verité," in which the personification of truth etches the names Schumann, Berlioz, Wagner, and Brahms onto a tablet held by fate.

With access to 140 of his lithographs, the exhibit offers patrons an unrivaled glimpse into the emotive work of this French artist. "Apotheosis" is an especially poignant example of the immortality Fantin-Latour grants his subjects. An ethereal woman shrouded in black holds a scroll listing musical compositions, while cherubs deck garlands on a wall bearing the simple inscription: Berlioz. The image pulls the viewer in with soft edges and deep shadows (characteristic of lithographs), lending gravitas to the scene and directing the viewer to feel a sense of awe as she reads the composer's name. Other equally exhilarating pieces were inspired by compositions, and SAMA has creatively included QR codes next to many of these enabling viewers to listen to the very music that inspired the artwork.

Fantin-Latour and Thorgerson, though separated by many decades, share a passion. For them, music is more than an auditory art: it affects us viscerally, coursing through our bodies like strong wine and creating grandiose visions.