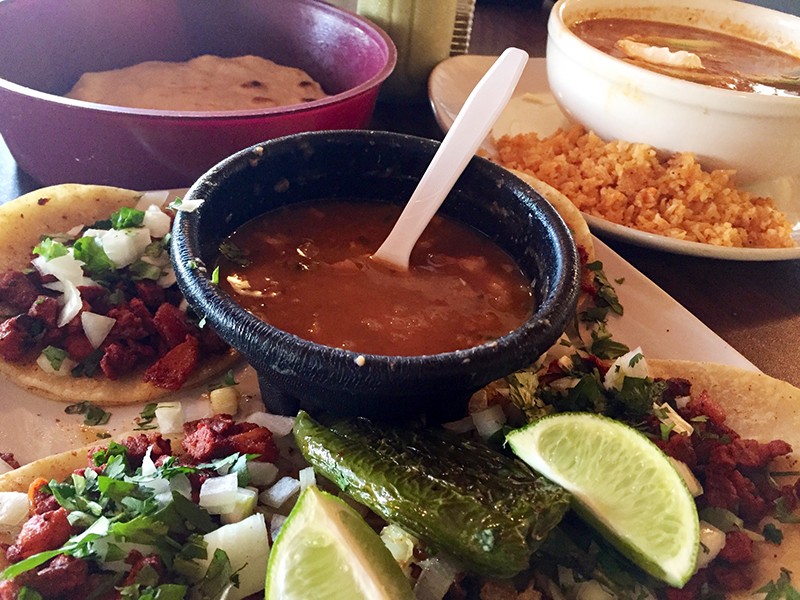 Melanie Robinson
Why nono? As far as we're concerned, it's more like Papa Yesyes.

Coming in strong with a highly unusual name for a Mexican spot, Papa Nono's is a tiny grill serving a huge portion of tortilla soup so tasty it gives Jim's Restaurant a run for its money.

Nono's is both and satisfying with day-of-the-week lunch specials, including albondigas (meatballs with an unspecified sauce) on Tuesday and chile relleno (poblano pepper with beef or cheese inside, sauce and cheese on top) on Thursday served with all the usual additional suspects – salad, rice, beans, two tortillas and iced tea – for $5.55. They also have breakfast plates starting at $2.95 for huevos rancheros with beans, potatoes and two tortillas. Breakfast tacos are a must for every establishment in Texas serving food and Nono's offers an astounding 27 options.

The exterior sign boasts a delicious Mexican burger listed on menu to including not only two patties, but ham and bacon as well. Yours truly is a recovering vegetarian, so that much meat at one time is a bit hard to swallow. I ordered both pastor mini-tacos and the tortilla soup instead, clearly not anticipating the magnitude of the portions about to be bestowed upon me.

The tacos were sprinkled with onion and cilantro, brought in less than eight minutes and adorably arranged with tolerable charro beans adorning the center space. As happens occasionally with smaller restaurants in SA, my lack of Spanish skills leaves me unable to communicate with staff, so just know that there is a green sauce on the table that is delicious. The bowl of tortilla soup was about as big as my face – and it comes with rice on the side. You better believe I happily toted my leftover Styrofoam cup full of soup – full of avocado, sour cream and chicken goodness – home to gulp down later. Totaling about $13, I fed myself for lunch and dinner.

Papa Nono's is near the Deco District, right off Fredericksburg behind that one terribly stocked HEB. The restaurant's interior is uncomfortably small, but the staff offers delivery between 8 a.m. and 3 p.m. in case you don't want to venture inside. Décor includes a stuffed taxidermy deer head, some cowboy-ish wall hangings and prayers tacked to the wall with Christian music in Spanish playing overhead.