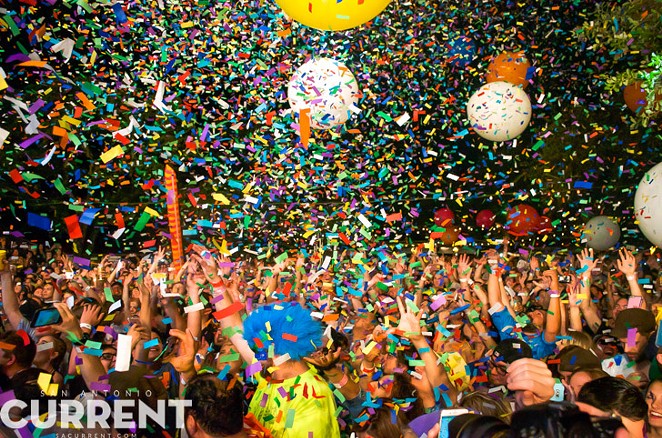 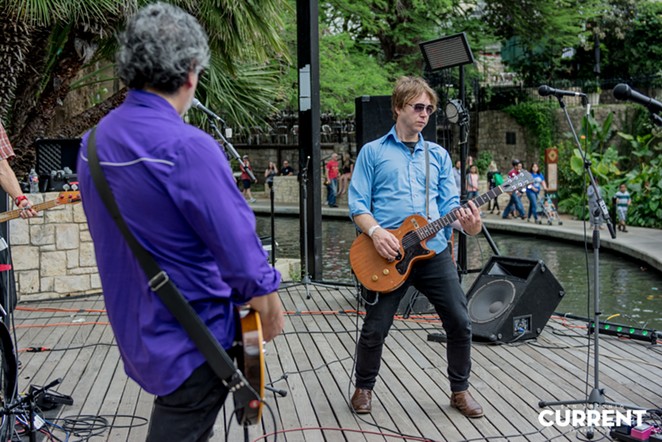 After they finished (around 4 p.m.) the sound guy put on some terrible screamo. I was like, "Why, sweet sound guy? Why put on terrible screamo on a nice day on the River Walk in San Antonio, clearly no one wants to be yelled at by angsty young men." Then, The Signature took the stage and yelled at everybody on a nice day on the River Walk ... and people were digging it! I guess I'm the dummy. The group executed their sound, a mix of Defones-like whisper metal and the aforementioned screaming, quite well and I realized that the sound guy was just trying to get the crowd prepared for the quartet with his earlier Bummer Mix. Upon the set's completion, the drummer for the group threw his sticks in the river, that was kinda rock 'n' roll. Mostly funny.

I made my way back to the main stage, the only one of three that required a ticket, to see the inimitable Reverend Horton Heat. It took a couple of tunes for the group to find their sweet spot and vocalist and guitar shredder extraordinaire Jim Heath couldn't seem to get the sound he wanted from his duel Fender amp setup. The trio launched into their finger-tangling Guitar Hero opus "Psychobilly Freakout," but the response from the crowd and Heath's vocals, sung through an echo-y Shure 55SH series microphone, left something to be desired. 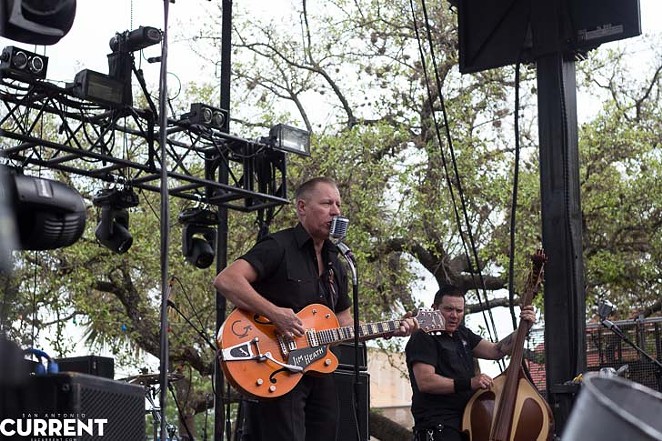 Gabby Mata
The Rev.
It was an excellent illustration of my personal vendetta against festivals. I prefer my rock 'n' roll in a dimly-lit, subterranean basement or a bar packed with fellow aficionados of the loud, crude and crushing. And the damn beachballs! I'm not trying to play volleyball while watching bands play live! This isn't Woodstock '99. Fuck the beachballs.

A cover of Chuck Berry's "Little Queenie" was quite impressive, however. Particularly since upright bass player Jimbo Wallace and Heath switched instruments for the classic rock 'n' roll number.

Back to the Arneson River Stage. H-Town's ironically named Fat Tony was halfway through a surprise set, which was, according to the schedule, supposed to be "SPZRKT". I wasn't complaining about the change in performers, Fat Tony is a staple of the Houston scene and has been making a solid name for himself for over a decade, information that seemed lost on the humdrum San Antonio crowd.

Tony closed with a solid tune that could be delicately bumped from the store-speakers at Macy's, all I could catch of the title was "Confession" or "Hold Back." It's lack of resonance with the crowd made me wonder if it was a San Antonio thing, something in our humble disposition, a lack of booze, perhaps? Unless you're a well-known performer from pop culture's past or use your set time to expound upon the greatness of the Spurs, the Deuce-Dime can be a hard nut for an artist to crack.

I never cared much for The Hawks (of Holy Rosary) before. It was just ... kinda boring pop shit. However, I get it now. They require an abandon of taste from the listener. Fuck what you know or trying to put them in some sort of box, if you can't enjoy the spunky, well-written whatever-core pop tunes, you're missing out. They've got a great B52s vibe. They love-shacked me and I liked it. They are also one of the most hilarious between-song-banter bands I've seen in a long, long time. I'm sold. 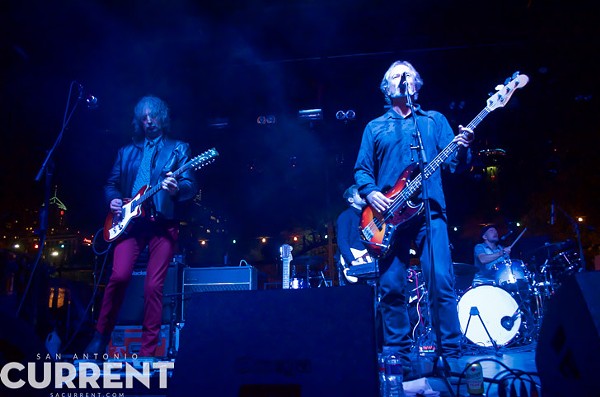 The Church.
At this point, the alcohol was steadily coursing through my veins. I vaguely remember hearing The Church's set while rounding up a friend in town from Dallas and gradually making our way back to the Arneson Stage for Cannibal Bitch, who I chose to watch over the famously frantic Flaming Lips – that's how much I wanted to see the audience reaction to a group that implores you to "Eat a Dick." As I arrived they were well into not-crowd-pleaser "I Hope  Your Daddy Fucked You." 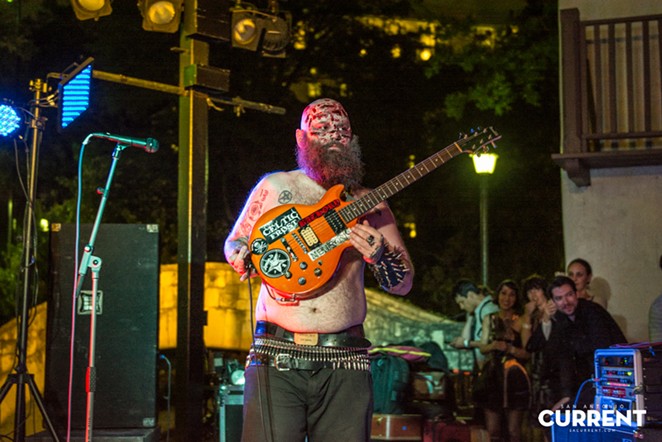 Jaime Monzon
Adrian Hart of Cannibal Bitch.
If I was a tourist in town for a little River Walk-ing or to visit an enlisted member of the family and I saw the shirtless duo of Adrian Hart and Sergio Hernandez pounding away at their impromptu metal, Hart's face ripped to shreds, oozing puss-y wounds, portly torso replete in satanic tattoos, screaming "Cannibal Bitch! She's a Cannibal Bitch!" I would never leave SA. Most metal thing to happen on the River Walk ... maybe ever. 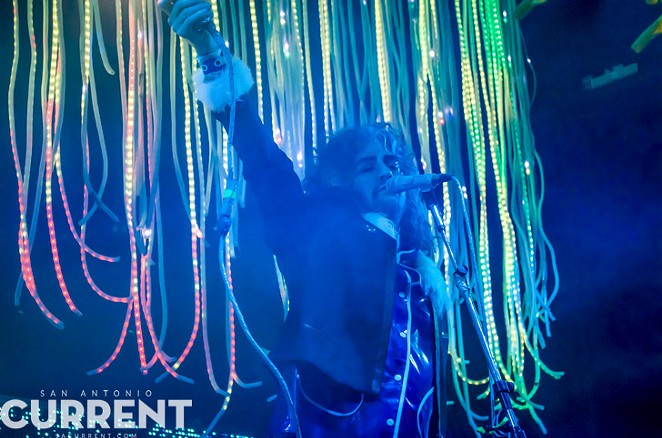 The Bitch boys finished up and we skedaddled over to the main stage in time to catch the Lips and Wayne Coyne in his famous bubble, a gigantic "Fuck Yeah San Antonio!" balloon, the most confetti I've ever seen in my life and their extravagant light show. An excellent end to what may be the final Maverick Fest ever. 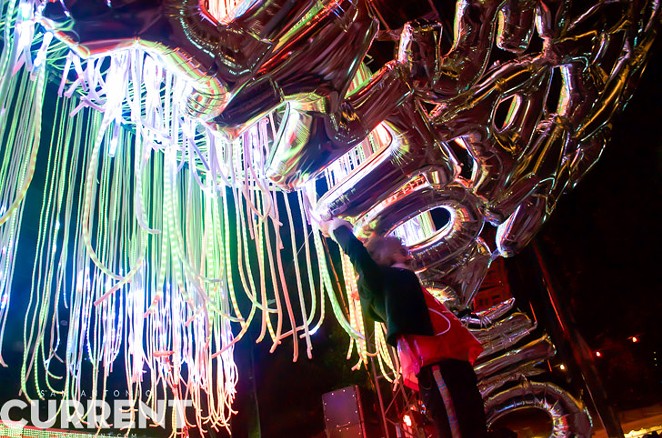