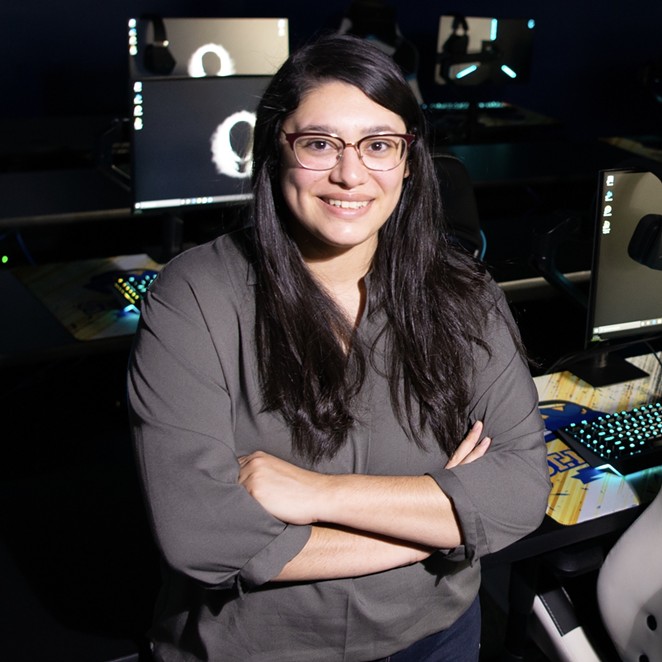 A San Antonio native and a lifelong gamer, Teniente didn’t enter the esports scene until her time as a student at UTSA. When she and her friends were unhappy with the school’s gaming events, they started hosting their own.

Teniente discovered the head coach position at St. Mary’s in early 2020, and after a successful interview, she found herself at the forefront of developing the esports portion of the school’s athletic department.

Colleges’ interest in esports has grown as professional gamers compete for large prizes in titles ranging from popular Fortnite to long-lived shooters such as Counter-Strike. St. Mary’s and Texas A&M San Antonio are the only schools in San Antonio with official esports programs, but experts expect others to follow suit.

Teniente says she and her staff have created a structured environment that’s not focused on players going pro but on developing skills they can transfer to future jobs and relationships. Gaming is the medium that brings these students together, and the skills they learn will help them in their future endeavors.

The Current recently caught up with Teniente to ask her about growing a competitive gaming program.

Is there currently any path-to-pro pipeline for your esports athletes?

Realistically, our goal is much more focused on student success, and esports is the medium to help achieve that. By success, I mean getting good grades and utilizing the skills learned within this program to get internships and jobs once they graduate. If any of our players go pro, that’s definitely a bonus, but I don’t think that is our No. 1 focus.

How are esports athletes compared to other athletes? Do they have to follow the same requirements?

They do have to maintain the minimum 2.0 GPA every semester, remain full-time students, and meet all of the expectations that we have laid out for our current student athletes. This includes social media guidelines and policies, guidelines on how you dress in your jersey, guidelines on anything and everything, from how you conduct yourself in an interview to our zero-tolerance policy on hazing.

What kind of opportunities does the program offer St. Mary’s students? Are there any incentives/scholarships for high school students?

We have open tryouts in the summer and during the winter break. These tryouts are open to anyone who is looking to be part of the college esports program. This can be current high school students, potential transfer students, and students looking to go back to school. The other piece is building relationships with high schools that have esports programs or esports clubs that have teams that are not only wanting to go to college but also want to be a part of a college esports program. We want them to know St. Mary’s is an option for them.

St. Mary’s currently has teams in multiple games, ranging from first-person shooters to virtual card games. How were these teams created?

We had to figure out what the current offerings were, competition-wise, for the specific games. Things like League of Legends, Fortnite, Overwatch, Rainbow Six, Hearthstone and Rocket League have ample amounts of college competitions available. But games like Apex Legends didn’t, so we had to tough the call of “OK, we can’t make an Apex Legends team, but we can make a Rainbow Six Siege team.” We had to figure out what was going to be viable.

How was it building an esports program during a pandemic?

We thought we would be running this program out of our esports arena, and then the news starts coming in that we’re shutting down campus and no one is returning from spring break, and we’re moving online. For myself and my assistant coach [Mackenzie Moncada], we talked to each other and said, “We can still make this work; we have to make this work.” Every collegiate esports program or club up until now has had to operate online. Before, there were varsity programs, there were student-run clubs, and they ran this stuff online. They didn’t have computer labs or arenas to play from.

You mentioned an esports arena. Is it only available to esports athletes or open to all students?

Our esports arena powered by Spectrum is in the University Center at St. Mary’s. You go up the staircase, and we are right there. We are very visible. We have 15 PC stations and four console stations. … It’s actually an old lecture hall-slash-conference room that was reused and refurbished for its current existence. I like it, and wherever the kids come and see it, they’re like, “Wow, this is so cool!” And I’ll probably never get tired of that reaction.