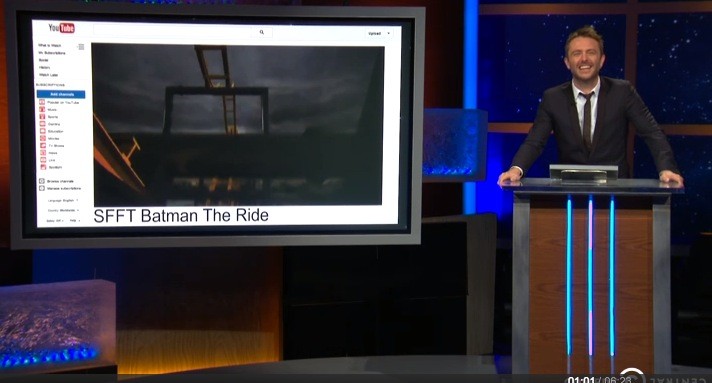 Chris Hardwick is the nerdy host for Comedy Central's @Midnight Last night, nerd crush and host of @Midnight Chris Hardwick called out Six Flags Fiesta Texas’ Batman: the Ride for having “nothing to do with Batman except that it might kill your parents in an alley.” Ripping the ride in his “Rapid Refresh” segment, Hardwick explained that "4D" means the roller coaster "exists in 3D plus vomit.” He continued, “Riders flip upside down six times because: Fuck you, neck!” (Calm down, linguist prudes, this improv comedy pseudo-game show airs on Comedy Central after The Colbert Report. F-bombs are allowed.) Hardwick, who you might recognize from MTV’s Singled Out as that guy with Jenny McCarthy, is also the chief creative officer for Nerdist and a familiar voice in the comic con circuit. Understandably annoyed with the Six Flags ride for having “zero Batman-y things” about it, Hardwick challenged his comedian contestants to come up with better names than Batman: The Ride. Whitney Cummings, who was a roaster on the "Comedy Central Roast of Joan Rivers," hit the ground with “the Vaginal Reguvenator.” (Clenching in fear works your Kegels?) Watch the vid to see Hardwick’s hand interpretation. Jim Jeffries, a stand-up Australian for insult and gallows humor, noted that Batman: The Ride did come with “Gotham-like weather.” (And yes, why would you be on a rollercoaster with an impending thunderstorm in the near forecast?) Jeffries launched his suggestion with ‘Superman’ but then darkly, very darkly, landed with “Christopher Reeve: The Ride.” He earned a round of groans, but won the round with 200 points. So what do you think: Are the flips and loop-d-loops in yellow and black paint enough to make you feel like Batman? Perhaps Six Flags could go the distance and give its riders Batman-shaped cowls that extend to protect the neck. Or if you have a better name for the ride, sound off in the comments and win 100 points. (Points are meaningless.)