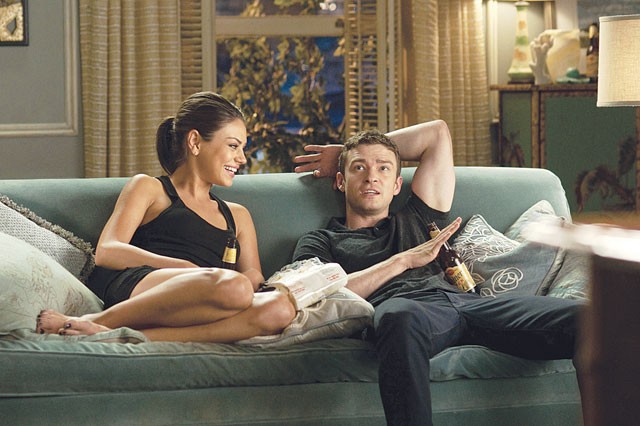 Courtesy photo
Dressed, but not for long. Kunis and Timberlake in Friends with Benefits.

After three sequels, two green comic book heroes, and a whole bunch of penguins, Hollywood’s rounding out its summer releases with director Will Gluck’s romantic comedy Friends with Benefits. It’s essentially a reimagining of When Harry Met Sally... and, y’know, every other romantic comedy ever made, but its witty dialogue and cameos keep the proceedings sufficiently fun. Not to mention the frequently undressed bodies of stars Justin Timberlake and Mila Kunis, which don’t hurt.

Jamie (Kunis) is a tough-talking New York headhunter who, despite a history of failed relationships, believes in fairy-tale love. Dylan (Timberlake), an L.A. art director with a similar romantic past, is recruited by Jamie to work at GQ Magazine. The two form a quick friendship after Dylan moves to New York, and one drunken night they decide that Hollywood clichés and Katherine Heigl movies have it all wrong — sometimes it’s really just about sex. And, with this clichéd denouncement of clichés, two very good-looking actors strip down and the movie really begins.

Let us now address the elephant in the movie theater: Earlier this year, Natalie Portman and Ashton Kutcher starred in the same movie, No Strings Attached. But while that movie celebrated sex between two good-looking people who (predictable spoiler) end up together, Friends actually spends time developing the characters and their relationship.

As Jamie and Dylan become closer, they are exposed to each other’s lives. Jamie’s mother (Patricia Clarkson) is a leftover from the 1970s friends-with-benefits era who can’t remember the exact nationality of Jamie’s father. Dylan’s father (Richard Jenkins) has Alzheimer’s disease, but Dylan, embarrassed, cannot face reality or open up to his sister (Jenna Elfman) about it. A few scenes take a turn for the worse as Timberlake scrunches his nose and attempts to tear up — mercifully, only Kunis really cries in the film — but fortunately these moments are few and far between. The classic romantic-comedy routine necessitates the melodrama of boy losing girl, but the film really shines when boy and girl are getting it on and bickering pleasantly.

Woody Harrelson counteracts the unfortunate dramatic moments with his usual quirkiness. His Tommy, the overtly gay sports editor, seems to be the only male friend Dylan has in New York. But Harrelson puts a twist on the usual best-guy-friend role, serving as funnyman to Timberlake’s literal straight man.

Andy Samberg, Emma Stone, and others make brief appearances, but the best cameo by far comes from Shaun White, who tumbles in, luscious red locks first, and displays either great comedic timing or a bit of insanity. But the number of cameos and the general organization lend to an overall feel of choppiness, and the lack of cohesion is felt between the film’s stars as well. Kunis is a bubble of energy, while Timberlake struggles to, well, do anything except crack jokes.

What the two lack in chemistry, however, they make up for by groping each other rather enthusiastically. While there is no frontal nudity, and the sex is always under the sheets, there’s plenty of skin — and underwear — on display.

Despite its preoccupation with dismissing romantic comedies, Friends With Benefits is exactly that — and every bit as predictable and unrealistic as you’d think. But decent writing, directing, and better-than-decent-looking actors make it an enjoyable experience that girlfriends will fantasize about and boyfriends will comfortably sleep through. •