Neon
Fantastic Fest’s favorite filmmaker and a guy who really, truly loves drunken karaoke, Nacho Vigalondo’s fourth film launches him out of the genre ghetto and into a semblance of mainstream (i.e., big stars, bigger budget) filmmaking. Longtime fans can relax, as this isn’t a sellout anymore than the director’s previous film Open Windows was a porn film. A very Vigalondo movie, Colossal mashes up dual narratives from multiple genres and then puts everything through the gonzification machine. If William S. Burroughs had made a sci-fi rom-com it might have looked something like this, and that’s very high praise indeed. 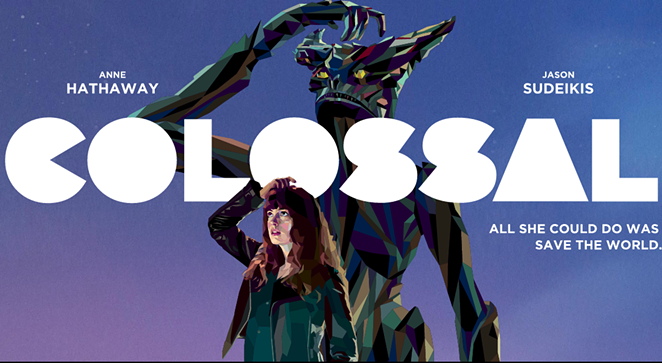 It’s near impossible to write about Colossal without at least a few spoilers, and as lovers of this always interesting filmmaker will attest, it’s always best to enter the Nachoverse with no idea of what you’re getting into. (Vigalondo’s mind-melting first feature, the wildly, wonderfully, and temporally abstruse Timecrimes remains the single best example of my forcing everyone I know to watch and rewatch a movie umpteen times.) That said, here goes. Anne  Hathaway is the alcohol-besotted Gloria, who’s kicked out of her boyfriend Tim’s (Dan Stevens) Manhattan apartment after one blackout too many. Nonplussed, she returns to the small town where she grew up and holes up in the (conveniently abandoned) family home. There she meets semi-cute redux with childhood bestie Oscar (Jason Sudeikis), now the owner of the local shabby chic watering hole. What better place for a not-recovering alcoholic to get a waitressing job? The pair, along with barflies Joel and Garth (Austin Stowell, Tim Blake Nelson), more or less continue drinking the town dry even as nightmarish news from abroad arrives in the form of a gigantic, Godzilla-esque kaiju stomping the bejesus out of Seoul at the exact same time every morning. There’s a connection here, emotional and otherwise, but the less said the better. Chaos of every stripe follows, and slowly but surely you realize Vigalondo’s made a snarly, bizarro-world female empowerment film that takes itself and its characters — along with their self-destructive life decisions — very seriously.

Half the pleasure here comes from watching Hathaway and Sudeikis play  against type. Neither drunken Gloria nor borderline stalker Oscar is anyone you’d want to hang out with after the age bracket of 30-something and yet they’re richly drawn and maniacally believable characters. (Vigalondo penned the script in addition to directing.) Colossal gets bogged down for a while with foreshadowy flashbacks that don’t totally click, but the last third of this relatively downbeat yet gleefully bonkers movie is so chock-full o’ crazy (in a good way) that the multiple storylines ultimately coalesce into something just this side of awesome. For sure this is the most ambitious entry into Vigalondo’s always interesting oeuvre, touching as it does on everything from love to self-loathing, and from people getting hammered to the populace of Seoul getting pounded. Hathaway and Sudeikis totally nail their respective roles (kudos to the great Tim Blake Nelson, to boot), and while Colossal falls shy of perfection, so does real life. Who would have thought Anne Hathaway plus giant-ass monsters plus booze would result in such a smart, genre-defying, femme self-actualization manifesto? Nacho Vigalondo, that’s who.