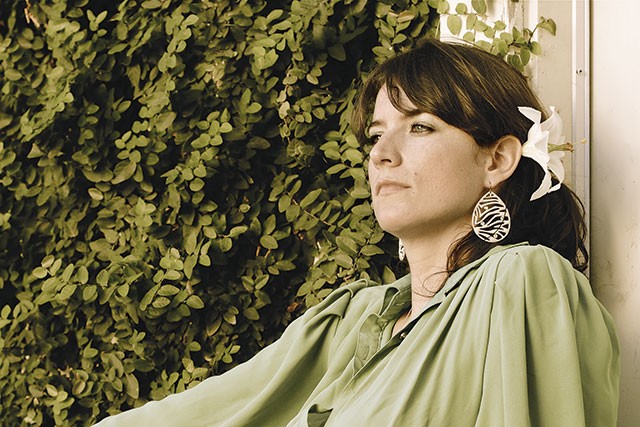 Courtesy Photo
For the first time, Melissa Ludwig will do a full show without her acoustic guitar

For Ludwig, it will be her first time at Leon (or Revolution Room, for that matter—she’s never played the venue, period). For us, it will be the first time we see her without an acoustic guitar hanging from her shoulders.

“I’ve been hearing that many times: ‘You should put the guitar down and just sing,’” Ludwig told the Current. “And whenever I’d do a guitar-less song during one of my sets, I could feel I should do that more often, because it gives me more ability to move around the stage and interact with the crowd.”

She’ll perform with her usual lineup of Mitch Connell on guitar, Dave Brown on bass and A. J. Navarro on drums, with guest Kerry Neubauer on keyboards. Brown, also a recording engineer, is in the middle of recording the band’s second album, the first since their acclaimed Now That You’re Here debut.

“We produced [the first album] ourselves, which may not have been the smartest thing to do,” Ludwig said. “It had a crisp, poppy sound, and what we’re doing now is going to be warm, laid-back and moody.”

Taking three years to put out her sophomore effort is an example younger bands should follow: do not rush it. But Ludwig understands why others choose the fast lane.

“When you’re young, you’re really trying to get somewhere with the music and make a name for yourself, you feel you have something to prove,” said the ever-youthful 35-year-old Ludwig, a former Express-News reporter and now a publicist. “At my age, I love doing music but I’m also aware that I’m never going to make a living at music. I have a career [laughs] and so I don’t have anything to prove. I do it because I enjoy it, so I’m going to do it on my timeline. If it takes a little longer, it takes a little longer. But I’m definitely not going to rush to put anything crappy out. That’s for sure.”