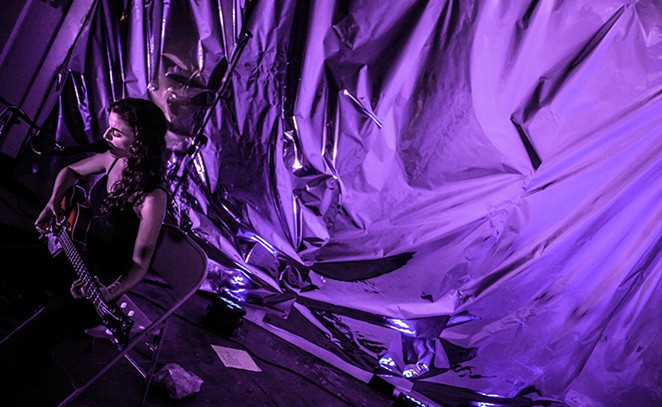 Starting and running a successful music venue is an arduous undertaking that has an extremely slim chance of ending in success. To call it a labor of love would probably do poor justice to all of the cursing and freaking-the-fuck out
involved. A while back, when I asked Colin Wells – part of the punk triumvirate that opened and ran the recently departed Ten Eleven – if he had any advice for folks who might want to open a DIY venue in the future, he didn't mince words: "I'd say 'Don't do it.'" He went on to clarify that it's best to go into it with low expectations, a high tolerance for work and a focus on intangible forms of success.

To put it bluntly, if you don't have some big capital behind you, you've got to be crazy to go into this business. So the question is: What kind of crazy? There are, no doubt, those who are crazy with overblown (likely unrealistic) notions of cashing in. There are those who are crazy with something akin to the gambling itch, who get off on trying to defy the odds. And there are those, like K23 proprietors, husband/wife dynamo Gem and Glenn Hotvet, who are crazy with a more ecstatic vision, crazy for the music and art they love, crazy for a city and its budding musical talents who need a place to play. This is, of course, the best kind of crazy.

Wayne Holtz
Glenn and Gem, the best kind of crazy.

For two years, the tiny concrete venue with the most far-out alley for a back porch has put on a seemingly endless stream of important art shows (though they at least temporarily dropped that aspect from their operations several months ago) and mind-melting musical onslaughts of galactic vision. They've hosted some impressive acts for a venue of their size (especially a new-ish one), including Pure X, Deradoorian, Pearl Charles, Gary Wilson, Holy Wave, Sugar Candy Mountain, Golden Dawn Arkestra, Colleen Green, Destruction Unit, Har Mar Superstar and more. Their shows are all ages and their vibe is peace and love and, as Allen Ginsberg once put it, “cosmic vibrations.”

On Saturday, K23 will celebrate its second birthday with one of their finest shows to date, featuring the tessellating, psychonaut beat magic of Al Lover, who describes his process as “taking drugs to make music to take drugs to,” the postmodern electro-psych voodoo of Houston's Studded Left, formerly Indian Jewelry, the jarring and doomy, precision drone-psych of Austin's Black Liquid Drop, and the support of beloved head-trippin' locals Flower Jesus Quintet (who may debut new music) and Shiva's Medicine Chest.

In conversation with the San Antonio Current last week, Gem gushed that her favorite part of running the place was “Hosting and hanging out with bands [she’s] been listening to forever, giving people a great impression of San Antonio, and providing a place where local music can grow and people of all ages can be a part of it.” Glenn was a lot more specific, recalling his favorite thing about running the place as “illicit activities with Destruction Unit” – whatever that means. Success for K23, in whatever form the venue takes, will be about “sustainability [for themselves and their families] and giving people exceptional experiences of great music and art,” according to Gem.

Even as they mark this second anniversary, the pair is saving funds to move into a new, larger and more equipped space (with multiple restrooms, AC, and a license to vend booze, etc.) "Hopefully by the end of the year," according to Gem. "But, I know I said that last year," she adds with a knowing chuckle. To help in these efforts, while doing yourself a solid, too, hit up the birthday bash or treat yourself to the upcoming K23 Pool Party and Pig Roast Fundraiser (June 25, at a private residence, tickets available at k23gallery.wix.com).