The elephant is eating and shitting at an alarming rate.

Not to be crass, but there isn’t a whole lot more than that going on here, and there are few ways to say it.

It’s impressive, actually — and more than a little hypnotic.

The westernmost end of the animal describes an undulating grey proboscis, unfurling and recoiling like an organic yo-yo, dutifully shoveling patches of hay into its owner’s attendant maw. At the other end, a wiry, tasseled tail rises and falls as pellets of excrement leap like cliff-diving Raisinets from a (mercifully) unseen cornhole. A pair of roving, roughly softball-sized flies arrives to investigate.

And then, it’s over. Nine seconds, four mouthfuls, eight poo piles, and that’s your show. (Unless, of course, you’d like another go-round.)

Then, the encouragement begins.

“i liked the spirit of your animation — keep working at this!” reads a caps-eschewing message from “toonertime.”

Just under a month later, “jessica” offers: “you so rock.”

This praise’s intended recipient, alas, is not the aforemetioned digestive virtuoso with the wide and would-be-burning ears, but rather, its supposed creator, a (once again, supposed) 13-year-old girl calling herself “tabitha.”

“i did this in 4th grade,” she writes. “it’s not perfect but i think it’s worth a laugh.” “This” refers to “elephunk,” the short and apparently hand-drawn poopin’-pachyderm animation described above — which, whether the artist was 9 or 90, deserves commendation for (1) looking like an elephant and, more remarkably, (2) moving like an elephant.

“Elephunk,” like jessica’s “Etta,” or toonertime’s “The Alien from Art Class,” is part of an ever-expanding collection (7,931 by an early-Tuesday count) of mostly original animation and artwork that lives as uploaded content on the San Antonio-based community, networking, and art-sharing site MyToons.com. The site was launched in 2006 by SA native and ex-concert promoter Paul Ford, Ford’s wife Stacey, and longtime business partner Dan Kraus. Ford, who serves as MyToons’s president, describes it as MySpace meets YouTube, with a twist.

“I had this idea,” Ford says of the site’s inception, “You know, it would be really cool to take all of the social-networking stuff I can see here that’s evolving in MySpace, and combine that with, you know, the secure video, free uploading, all this stuff that was going on in an early stage at that point with YouTube, and focus that only on animation.”

The goal, says Ford, who also spent years working with and developing 2-D and 3-D animation software (and, incidentally, as a paratrooper in the 82nd Airborne Division), was to create a platform for animators frustrated by a dearth of practical and streamlined arenas in which to share their work.

“They never had a venue for this,” he says. “It was always — it was so much of the stuff just sitting in the can. You know, number one, they could put in on their blog — oooh! No one’s gonna see that. You could upload it, at that time, into the giant morass of what there was on YouTube. You know, it just sort of `got` lost in the fray there. And so, you know, what we really wanted to do is design something that was really clean, really fast, really focused on the animation, you know, easily searchable — categorizing is by styles, by type — and where these animators could get together, talk about stuff, collaborate on things, work together on stuff, and have their work presented in a really high-quality format.”

In a layout much like YouTube’s, MyToons’s homepage allows visitors to browse the most viewed/recent/discussed/popular members, uploads (including flash games), and groups (ranging, in variety of interests, from classic cartoons to caricature to Christian animation to a “furries” forum). MyToons members’ pages are customizable, leaning toward MySpace’s palette (if not as varied). Each new member may choose from a number of predesigned “avatars” (I hovered indecisively for a period between the “Angus Young” design and the Super Troopers-ish cop with the Aviators and handlebar mustache, then settled finally on the one clearly styled after “Thriller”-era Michael Jackson) or upload his or her own, set several preferences and begin uploading content immediately. (A bit short on animation, I improvised and uploaded images of the Paul Verhoeven-inspired “Verhoeventines” from last week’s Current, in order to test how long it might take for a brand-new member to receive comments on his “artwork.” Results later.)

Despite the Alamo City’s, say, “underdog” status in the bid to become a bustling and multinational animation hub, Ford and company decided to stay put (MyToons’s offices are housed on Broadway, two stories above Twin Sisters restaurant), and the decision doesn’t seem to have hurt: MyToons signed a deal with YouTube February 7 for a MyToons-exclusive channel on the online-video giant’s site. MyToons will continue to operate independently, while furnishing the YouTube channel (Youtube.com/mytoons) with select content.

“We’re really a good thing to point at that, yeah, there is, you don’t have to turn 18 and leave,” Ford says. “There is cool stuff to do here. And you know, `we’re` trying to provide some of that stuff for people to do.”

In large part, animators seem to’ve taken the bait. At last count, MyToons lists close to 6,000 members, among whom may be found a number of award-winning professionals with extensive studio experience — experience that, in some cases, serves to benefit other, less-established artists.

“Maybe once a month or so, I get somebody saying, you know, asking me something about, take a look at `this or that`,” says Rusty Mills, 44, a MyToons member since November 2006 who also happens to have garnered three Emmys (one Primetime, two Daytime) — and has been nominated for several more — for his work as a director and producer on such shows as Animaniacs and Pinky and the Brain. When asked for pointers, he says, Mills has frequently obliged.

“Anything from timing, to, you know, the speaking: ‘I can’t quite tell what the characters are doing,’ or maybe it’s, ‘Work on your drawing of this,’ or ‘Take a little more time here,’” he says of the aid he’s rendered. “As a professional, I can look at some of this stuff and kind of get an idea if they’ve been doing this for a long time, or, you know, not very long, and if they’re really trying to get into the industry or not ... I don’t, I’m not gonna sit there and tear somebody apart, `if he or she’s` just doing it as a hobby, but I’ll suggest `things`.”

And it isn’t just the novice MyTooners who’ve found advantages to membership.

“The stuff that ... we did for Nickelodeon, is extremely, uh, P.C.,” says Ron Noble (MyToons member since May ’07), another Daytime Emmy-winning director who worked on such shows as Rugrats, The Wild Thornberrys, and As Told By Ginger. “They basically wanted to be babysitters for parents that would leave kids in front of the TV .... nothing offensive whatsoever. So, it’s like, you know, we had to worry about, like, if a kid jumped on a bike and went 10 feet, and then jumped off the bike, he had to put a helmet on first. In a cartoon. I’m like, you gotta be kidding me. Every single kid in a car, or wherever, every single person in a car had to be wearing a seatbelt. In a cartoon .... I think that the first thing I did as soon as I got out and started doing my own thing, is purposely made this short that’s very — you know, a guy gets decapitated in the middle of it. It’s like, ‘Yeah!’”

Once it completes the festival circuit, Noble says, his latest project — a short film called Hope Springs Eternal that, its trailer suggests, includes several attempts at suicide by the protagonist and at least one session of strained, below-deck, doggy-style coupling between a comely young woman and what appears to be a pirate-ship cook — will end up on MyToons, where he expects no “wear-a-helmet”-esque resistance. “They’re dying for me to put it up there,” he says of his MyToons acquaintances. “They keep begging for it.”

James, 18, a Washington high-school student and flash animator (he admits to a brief “fling” with 3-D), has been a MyToons member since December (code name: “Assassin”; avatar: Link from The Legend of Zelda crossed with Lurch from The Addams Family) says he’s been bitten by the bug.

“I’m always going to be doing animation my entire life, but just whether I, you know, do that professionally, to live off of — I don’t know.”

He says that until he joined MyToons (which he checks “Every day”), he didn’t feel like he was really reaching anyone with his work.

“I put my videos on some other `sites`, but nothing, you know ... a lot of views, but nobody ever commented, or I never knew what everybody thought. And then, `I` put them on MyToons, and like, bam! There’s all these comments, and it’s like, sweet!”

And to that, this rookie MyTooner (code name: bv) must attest. Not two hours after my maiden upload, I had my first comment — a positive one, and, most surprisingly, not from a MyToons staff member. Which, naturally, spurred me to share the love.

“It’s got a lot more of, like, a community aspect,” James says.

Ford, it would seem, agrees:

“It’s everybody from those, you know, the boys and girls at Pixar to, you know, the boys and girls down here at Harlandale, at the high school,” Ford says. “And it’s this great melting pot, because they have just as much opportunity to talk to an Emmy-award-winning or Oscar-award-winning animator as they do to anybody else ... It doesn’t matter who you are, what you are; if your animation’s good, it rises to the top.” • 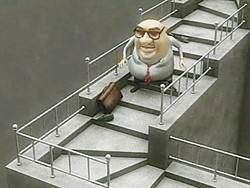 Hallucii When an alcoholic is trapped in an Escher-like world, mishaps happen. Add a little old-time piano music and the James Bond theme when things get hairy, and you’ve got an absolutely must-see animation. This is a prime example of the evils of moonshine demonstrated in an interesting way; anyone who has ever been drunk can relate.

The Fly The unthinkable happens when a pesky fly buzzes around a ninja who is trying to meditate. We won’t give it away, but let’s just say this puts the scene from The Karate Kid to shame … you know, the one where Daniel-san catches the fly with his chopsticks for the first time.

The Little Dictator This number mixes history and humor by featuring a Napoleon who makes the most outrageous faces and fondles his velvet. The Little Dictator is the “real” story behind the dude who decided to invade Russia only to get trumped by Mother Nature.

I Blame Richie Sambora If you’ve ever had technical difficulties with computer speakers (for example, when you’re catching up on email and the background music quits playing) then this animated feature is a simple, sweet, downright hilarious send-up of how irritating that problem can be. The lesson? Be careful when adjusting speaker volumes, especially when Bon Jovi is just a mouse click away.