Nachos We Love for Game Day 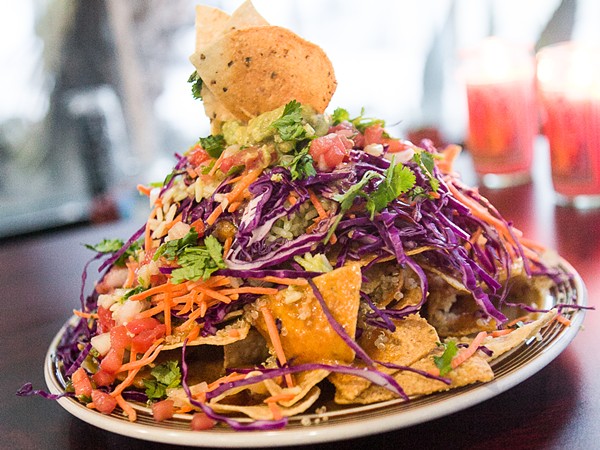 This will come as no surprise: I literally only go to Super Bowl parties for the snacks. I couldn’t possibly tell you who won the trophy last year, but I can tell you that I once thought the first down line was actually on the field. The snackage that goes down during Super Bowl Sunday derails most resolutions and requires far too much Tums, but ‘Murica, or whatever.

And no other snack shows American ingenuity — oh, wait, they were invented in Piedras Negras, Coahuila — than the nacho. Piled high, often caving under the pressure of its own ingredients, a plateful of delicately composed nachos is a wonder. Here are a few of our favorites around town to bring to your football-viewing soiree. Carnitas Nachos // The nachos at Sanchos are served on a paper boat that somehow manages not to crumble under the weight of these fixin’s. Refried borracho beans, Jack cheese, pico, and lightly grilled pickled onions are all part of the mix. Although these can be made vegan or vegetarian, stick with the carnitas, which feature a cinnamon-y bite. 628 Jackson St., (210) 320-1840, sanchosmx.com.

Monster Kong Nachos // You’ll be the star of the party if you show up with an order of these legendary nachos from Chacho’s made to feed five to eight hungry party-goers. The platter contains bean and cheese, picadillo beef, shredded chicken, brisket, chicken fajita, beef fajita, a variety of cheeses, guacamole and sour cream for $21.99. Multiple locations, chachos.com.

Classic Vegan Nachos // Vegeria may have moved locations, but their nachos have remained crowd-pleasers for vegans and meat-eaters alike. Described as a “mountain of tortilla chips,” the dish also includes vegan queso, soy bean picadillo, quinoa, guacamole, pickled carrots and onions with a sunflower seed crema tying it all together. 1422 Nogalitos St., (210) 465-9233, myvegeria.com.

Super Nachos // The only plate of single layer nachos on our list, the Super Nachos from The Cove neatly present black beans, cheese, ground beef, chopped spinach, tomatoes and jalapeños with an avocado sour cream dip. You’ll want to pour that sauce on everything. 606 W. Cypress St.,
(210) 227-2683, thecove.us.