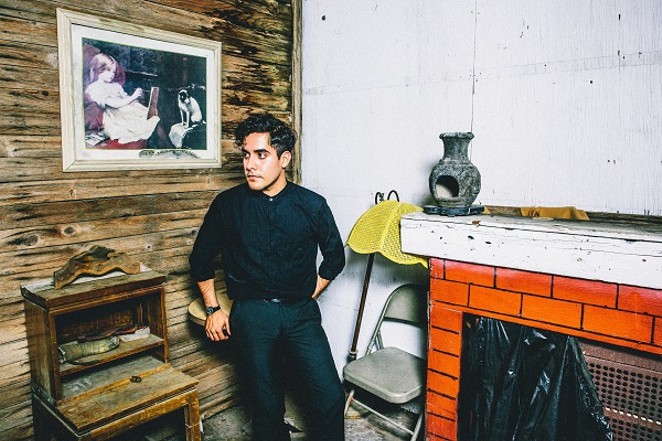 Courtesy
Alan Palomo (Neon Indian) plotting to maximize the chill.
Alan Palomo, who makes his chill and expansive nu-disco music under the name Neon Indian, is no stranger to San Antonio. Born in Monterrey, Mexico, Palomo grew up in San Antonio and, even though he started Neon Indian in Denton while attending the University of North Texas, we like to claim him as our own.

Palomo has performed in SA several times since his ascendance as an improbable indie-pop star, peddling wonked-out retro sounds shuffled into lysergic, dance-floor-ready gems. And he'll be back (at Paper Tiger) on October 21, still supporting 2015's excellent release Vega Intl. Night School, an album that finds Palomo exploring more hi-fi dance vibes, and moving further away from the hypnagogic haze of his debut Psychic Chasms.

When Palomo debuted Neon Indian in 2008-2009, he got lumped in (and probably rightly so) with acts like Toro y Moi and Washed Out, all together comprising (with a handful of other, less prominent acts) the micro-genre chillwave. And, to be sure, there is still a chillwavian (forgive me) non-nonchalance to the construction of Neon Indian's music, but Palomo has moved away from the (deceased?) micro-genre by creating music that is more fully-realized, less reliant on pure sampling, and showcases more diversity of palette and pacing.

In a way, Palomo's continuing work (and success) can be seen as a forerunner to the now-burgeoning ATX/Central-Texas retro-electro music revival, which is now anchored by Austin's Holodeck Records. These acts (like S U R V I V E and Boan, like Troller and Bayonne, like Botany and Xander Harris, like How I Quit Crack and many others) retool the synth-happy 1980s aesthetic that they grew up with into some of the most vibrant music being made right now. Holodeck founders S U R V I V E, in particular, have even recently taken the music world by storm on the strength of their musical compositions for the runaway hit Netflix series Stranger Things.

At its best, this music isn't all-out nostalgic, but brings throwback sounds and methods into the realm of contemporary pop music. To be sure, Neon Indian, and all of the fine acts listed above, are unique and distinct from each other. But what they share, under the common umbrella of retro-futurism, is a desire to, as art critic Dave Hickey once put it, "Go back to a time when everything didn't suck" and start there. At its core, retro-futurism seeks to re-imagine the problems and solutions of the future through the lens of the past. In terms of music, this produces endless interesting permutations and sounds that are at once deeply familiar and wholly new — a tantalizing combination.