New Comics Collections From 'Drawn & Quarterly' Cut to the Quick 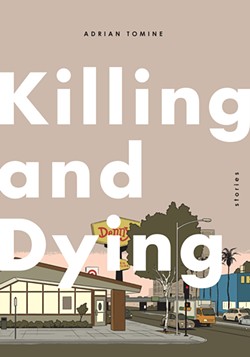 In Adrian Tomine's latest collection of graphic short stories, Killing and Dying, broken people navigate clumsily through their lives. Whether revving wheels that seem permanently stuck in the mud or trudging away from an emotional car crash, gingerly checking themselves for injury, Tomine's characters do eventually arrive at some form of peace or at least stasis – or some of them do, anyway.

Tomine has been writing and drawing Optic Nerve since the age of 16; Killing and Dying is the latest hardbound collection of stories from the Optic Nerve series, and it continues its tradition of quiet devastation captured in minimal lines.

The clarity of Tomine's cool, spare drawings is matched by the sharpness of his observations; he has a phenomenal ability to create fully realized characters in fully realistic situations, often killingly painful, though sometimes lightened with a redeeming moment or two of joy. The title story, about a teenage girl with a stutter who wants to do stand-up, catalogs every cringe, every pain, every fragile hope with staggering economy. Killing and Dying seems to have been dicated by that still small voice in the night – the one that tells you what a fuckup you are and then, in the next breath, tells you it'll all be OK. 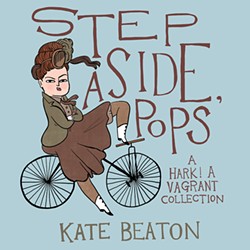 Quirky is a word that sets my teeth on edge, and yet I can't argue with its inevitable application to Kate Beaton's comics. That adjective denoting a blend of oddball and endearing fits, and so Beaton wears it, though it's annoyingly reductive. There's quirk in the way she applies modern-day perspective to historical events, and in her loose, scribbly line, but do not be deceived by it: There's also the deep and broad knowledge of world events only a history major would possess, and those innocuously wiggly sketches manage to depict utterly specific emotions, evoking reaction with a millimeter's precision while looking like a dashed-off doodle.

For people of a certain bent, Beaton's "Hark! A Vagrant" has been an addiction since its inception in 2007. Once it found a home on the web, it became a regular stop on the Internet daily rounds, though with an irregular publishing schedule, there's no knowing when a new comic will be up. Her mix of obscure historical detail, literary obsessions, Canadiana and pop-culture noodlings attracts a surprisingly large following, most of whom will no doubt purchase Step Aside, Pops – who'd predict that a collection of riffs on sea captains, the Brontë sisters, Danton and Robespierre, Nancy Drew and Ida B. Wells would catch fire?

But it does. Like all the best jokes, it's impossible to explain why a multi-page ramble through the life of a minor character in a Janet Jackson video from 1986, or a series of "continuations" from scenes depicted in antique stock art, or even just Napoleon huffily explaining that he's not really that short, is funny – you have to see it to feel it. Sure, you can see a lot of it for free online, but for those moments when you're away from the web, Step Aside, Pops exists to keep you entertained. There's even a helpful index, so you can flip right to your favorite character, from Achilles to Zeus.