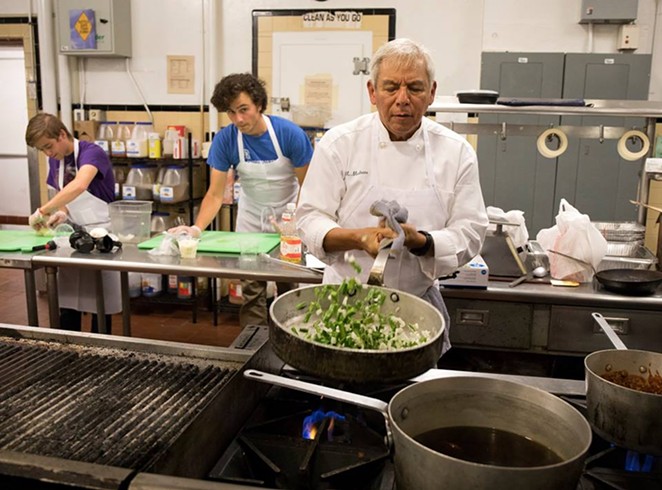 Via Adán Medrano
Adán Medrano cooks up some nopales in the kitchen.
Chef, author and filmmaker Adán Medrano is turning the camera on South Texas' indigenous cuisine.

Medrano, founder of the 40-year-old San Antonio CineFestival, is serving as executive producer of The Roots of Texas Mexican Food, a documentary filming this summer in the Alamo City and other Texas locations. The 45-minute film will accompany his forthcoming book, Don't Count the Tortillas: The Art of Texas Mexican Cooking.

The purpose of both is to highlight a cuisine that took root here long before the arrival of European colonists — and even longer before restaurateurs adapted it to Anglo tastes via Tex-Mex food.

"This is a film about food as resistance and as a celebration of Mexican-American culture and life," said Medrano, who now resides in Houston. "It's not a cooking show."

That means, rather than show off the River Walk (again) or hang with celebrity chefs (again), Medrano and director Anibal Capoano will focus on home cooks in their kitchens. He'll show them picking out ingredients at Bolner's Meat Market and slow cooking in outdoor earth ovens.

The cuisine he's documenting is vastly different from Tex-Mex in that it relies on fresh, low-fat ingredients and uses chiles for flavor and color rather than heat. What's more, it was largely developed by women. The most lauded Mexican chefs picked up their love of food while watching their mothers or grandmothers in the kitchen, Medrano said.

The Roots of Texas Mexican Food will be marketed to U.S. public television stations and the Latin American TV market, but Medrano also expects it to make the rounds at festivals later this year. The companion book is due out this fall from Texas Tech Press.

Beyond its differences with Tex-Mex, Medrano hopes the doc can clear up one other misconception about the state's Mexican cuisine: that it was imported.

"This food did not come from South of the Rio Grande," he said. "It existed hundreds of years before there was a border."
Scroll to read more Flavor articles
Join the San Antonio Current Press Club