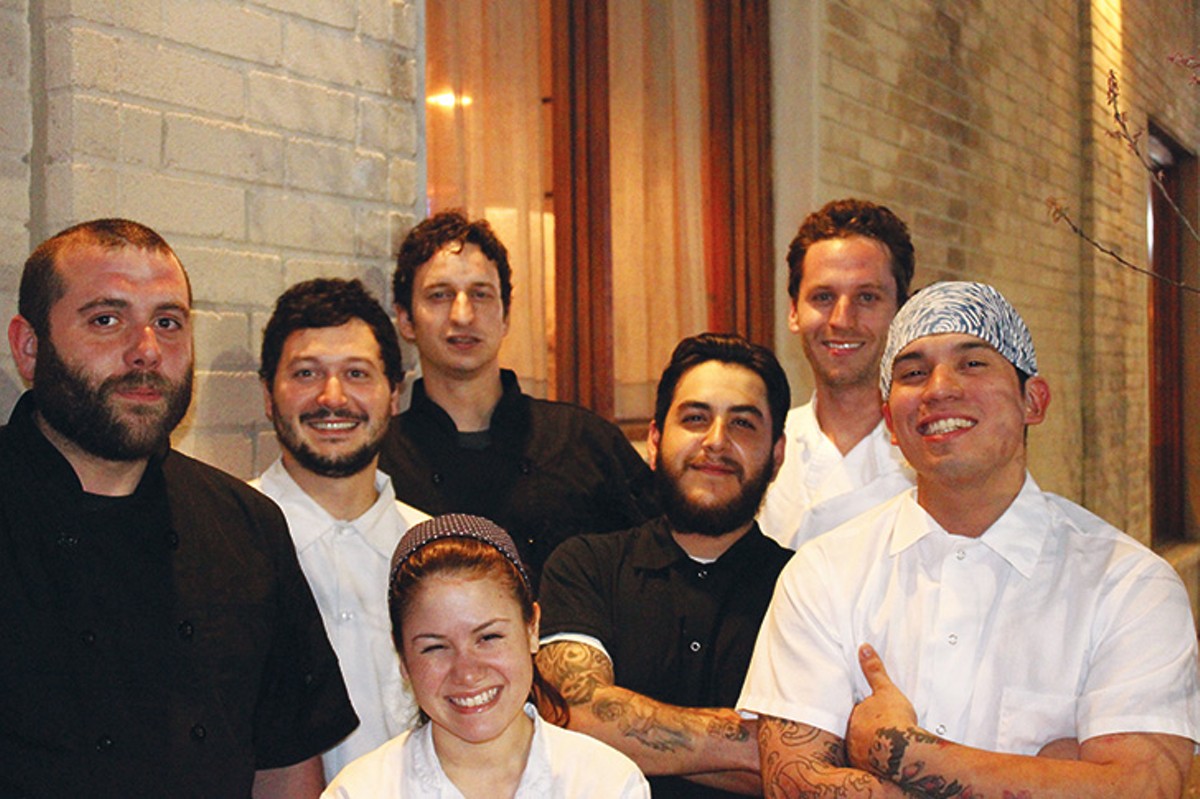 From left: Richardson, Hallagan, Connella and Martinez on right Photo by Javier Treviño
Editor’s Note: We’re kicking off a new series,“Squad Goals,” where we visit with new faces in kitchens across town. This time we’re getting to know the new team behind Brigid/Francis Bogside and what they’re building in the next few months.

The whispers were audible in January. Chris Carlson leaving Brigid was the talk of the culinary scene. So much so, that a press release was sent out:

Brigid in Southtown has met incredible success in its opening months of operation, including Best New Restaurant of 2015 in the Express-News. This has led to new opportunities, including a food program at George's Keep, Francis Bogside, as well as a new concept in Lincoln Heights.

Having completed this enterprise and seeing that Brigid is a success, Chef Chris Carlson has decided to go on to his next challenge.

"This has been an incredible experiment that has worked well, and has taken off to places I never thought possible. I have decided to move on from Brigid to pursue new opportunities. I appreciate the staff and all the hard work and dedication that went into this project."

Short, sweet, generally amicable. But Carlson's departure left a gap to fill and a new team to assemble.

These days, Justin Richardson, Halston Connella, Evan Martinez and Noel Hallagan are manning that teensy kitchen — more on this later — and so far, the transition has been seemingly seamless.

With Brigid's opening in September, the relatively new staff has had to bond together to make things work, again, in a kitchen that could double as a walk-in closet. Richardson has emerged as the leader or as Martinez put its, "the head of Voltron."

"I've grown a lot this past month, just learning not only my own physical and mental limits and pushing beyond them, but motivating people to do the same thing in a time of crisis. Losing Chris was a shock for everybody, myself included, but we've turned it into opportunity," Richardson said.

Changes have been slow, but steady.

Brigid's power lunch has been replaced with a relaxed mid-day offering at Francis Bogside, and the prices are hella cheap and feature everything from fried chicken sandwiches to velvety smooth green curry.

Though items are slowly making their way onto Brigid's menu, the guys are having fun with specials. Valentine's Day weekend was privy to a sous-vide duck confit with fanciful splotches and swirls of sauces.

New dishes are collaborative efforts throughout, as each cook takes a stab at making a plate better.

"We see the flavors and concept progress through us. It picks up different talents, nuances, that each and every one of us instills," Richardson said. "...whether it [is] how long we braise or cure, how we reflect that flavor on the plate or [pay] homage to San Antonio or the dish or the concept of the dish."

This comes even at the cost of a few dents and scratches to the ego — this is a kitchen run by four dudes in their late twenties (Connella at 30 comes in as the elder, or Danny Tanner with his quiet calming nature).

"We stretch the boundaries but we kiss and make up real quick," Richardson said. And though they might argue about plating or flavors, the group is quick to point out each other's strengths.

Richardson tasks the others with pushing themselves to new heights using whatever ingredients are coming through, while he considers Hallagan the heart and soul of the operation, "This guy does not back down from any thing ... when you're in the kitchen and outgunned or outmanned, he steps up."

Though they might look relatively young, each is bringing years of kitchen experience. Richardson's worked at Austin's Historic Driskill Hotel, Dallas' Stoneleigh Hotel and later toiled away at Sandbar under Andrew Weissman and Carlson. Connella helped open Il Sogno, The Granary 'Cue & Brew, Barbaro, Biga on the Banks and Citrus and occasionally still sates bellies with his pop-up, Rebel Pizza. Martinez, 26, worked at NYC's Le Bernadin before traveling to Chile to start a cooking collective and helped open Starfish in Southtown. Hallagan, who's also working on a two-year business administration degree, comes fresh from Michael Sohocki's Restaurant Gwendolyn.

"I think we have the best kitchen in Texas," Martinez said. "I wouldn't trade it."

You can put that claim to the test as the new menu rolls out this spring. But you can play guinea pig at Bogside now with late-night snacks which have included Third Coast mac 'n' cheese, and an open-faced peanut butter and jelly AND foie gras sandwich. And, yes, it was as good as it sounds.