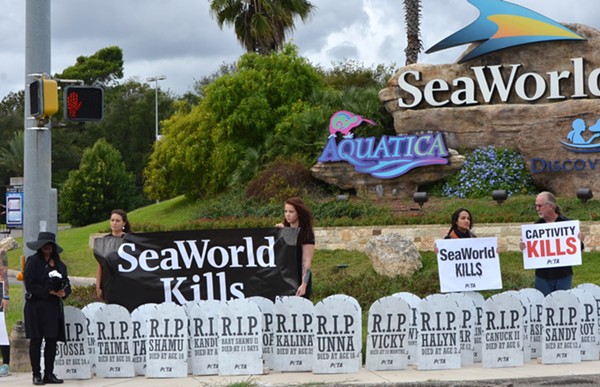 Animal rights group PETA placed more than twenty gravestones in front of the theme park's main entrance Tuesday afternoon, each one representing an orca that died in captivity at a SeaWorld park.

Matt Bruce, PETA spokesperson, said every whale represented had died at an unnaturally young age. Usually, he said, orcas live up to 50 years. Most of the headstones were for whales who died in their teens.

SeaWorld has tried to keep a relatively low profile in the media following the release of Blackfish, a documentary that illustrated the park's inhumane treatment of orcas. This March, SeaWorld announced it would halt its orca breeding program and phase out the orca shows altogether. But last month, park officials reversed the promise, saying that the remaining whales would continue to perform in a more "natural setting." In short, this means the whales would have a fake backdrop that resembles a coastline.

Bruce shook his head at the mention of this switch. Instead, he said, SeaWorld should fund an orca sanctuary that has "some semblance of a natural environment." The theme park hasn't mentioned any interest in building a sanctuary, and, according to Bruce, no whale sanctuaries exist in the world—yet.

"We're hoping to help build one off the coast of British Columbia," he said.

One PETA volunteer, dressed in all black, walked slowly back and forth in front of the cardboard graves as cars whizzed by. Some people honked and waved as they passed. Two security guards stood by the front gates, looking bored.

The theme park, however, was closed Tuesday, meaning no SeaWorld visitors saw the stunt.