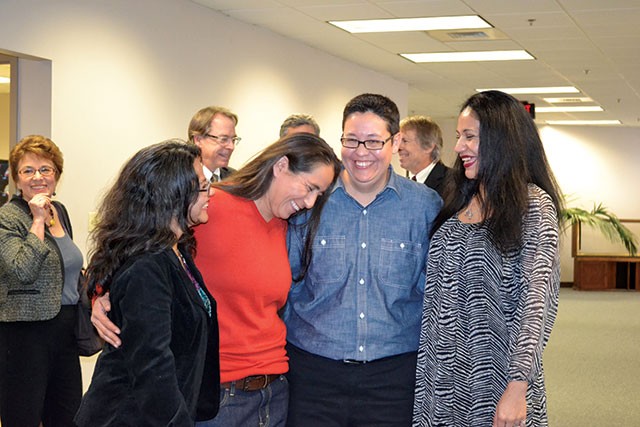 The evening of November 18, hand-in-hand, Elizabeth Ramirez, Cassandra Rivera and Kristie Mayhugh—joined by Anna Vasquez—stepped into freedom for the first time in more than a decade.

Incarcerated for crimes they say they didn’t commit, the women, known as the “San Antonio Four,” embraced family, friends and supporters, who waited patiently outside the Bexar County Detention Center for a chance to finally be reunited with the women they believe were unjustly accused and robbed of a full life.

Convicted in the late ’90s for sexually assaulting Ramirez’s two nieces, the already strange case was built upon shaky evidence, flawed forensics and possible coercion, as the Current extensively reported in our November 12, 2012 cover story. For instance, one of the two child victims, now an adult, recanted her statement last summer, conceding her father had “coached” her into making false allegations against her aunt and three friends. Further, newly presented scientific evidence invalidated testimony given by a state expert witness, pediatrician Dr. Nancy Kellogg, who at the time affirmed scars on the victim’s hymen were a result of sexual abuse.

The decision to release the women was aided by a new Texas law that bolsters the “junk science” argument in granting appeals, paving the way for historic institutional reform, say legal advocates. It is this new law—the first of its kind in the country—that could make the San Antonio Four story a harbinger of what is to come for wrongfully convicted inmates.

An eleventh hour paperwork glitch in Rivera’s file prolonged the wait, dragging out the inevitable for anxious loved ones, who hung on eagerly to intermittent updates from Paul Berry, spokesperson for the County Sheriff’s Office. Would it be 15 minutes until they could see, hug, kiss and cry with their daughter, their mother, their sister? Thirty minutes? One hour, two?

In the delayed final stretch, Ramirez and Mayhugh refused to exit without their friend—a testament to their solidarity in the fight to prove their innocence. “We’ve all come as one package since the beginning and we’re going to stay that way,” Ramirez later said of their choice to stay behind until Rivera was released.

Earlier that day, tears of joy and cheers erupted in Judge Mary Roman’s packed Bexar County courtroom when the women’s attorney announced the San Antonio Four would be out on signature bond. (Vasquez was paroled in 2012 after serving nearly 13 years behind bars.)

Rivera’s 21-year-old son, Michael, was just nine years old when his mother was sent to prison. Teary-eyed, he said he was thankful for the verdict and a chance to reconnect with her a day shy of his 22nd birthday. Outside the courtroom, tears streamed down the face of Ramirez’s mother, Gloria Herrera, also at the hearing, who said the struggle to free her daughter had been a slow one, rife with despair and sadness. In the beginning, she said, “we had no hope.”

She continued, “It was hard this whole time, because we knew they were innocent, we knew they didn’t do anything wrong.”

After sending countless letters soliciting help with no response, the women felt all but abandoned in prison. It wasn’t until Canadian researcher and professor Darrell Otto, began investigating the women’s case in 2006 that they saw the first glimmer of hope. Otto lobbied advocacy group The National Center for Reason and Justice to take up the case—they did, enlisting legal defense assistance from the Innocence Project of Texas three years ago.

“We quickly saw it was tied to the Satanic sex abuse rituals of the ’80s and ’90s and realized that the medical evidence was flawed,” said Debbie Nathan, NCRJ director (and former Current staffer), during a press conference last week with the four women.

Nathan says the combination of the Satantic ritual abuse hysteria, minority prejudices and palpable homophobia (the four women are lesbians) heavily contributed to their trial woes.

“We’ve see how easy it is for ordinary people to be falsely accused and be denied due process—and some people are more vulnerable than others,” said Nathan. “The San Antonio Four are lesbians, and gay people are not always protected by the criminal justice system, they can be targeted. [The women] are low-income people of color, also targets for our culture’s growing anxieties and tendencies to maintain order by accusing people, punishing people and ostracizing people.”

But the most potent mechanism in securing the women’s freedom was Senate Bill 344, a recently passed Texas statute that advocates and attorneys say will usher in a new era in the Texas criminal justice system. The law allows prisoners a chance to rid their convictions and see a new trial if evidence presented by the prosecution is invalidated due to unreliable forensic techniques or “junk science.” It’s heralded as pioneer legislation not only in Texas but also in the nation. The SA Four case is the first known example of the law’s effects, making Texas—known for its tough-on-crime approach—paradoxically a leader in redemption for the wrongfully accused.

“This is the beginning of a revolution in our criminal justice system, and ultimately in the criminal justice system around the whole country,” said Jeff Blackburn, with the Innocence Project of Texas. “This is the first case and it’s going to be one of the most important cases ever […] This is a law that will ultimately get many hundreds of people out of prison, people that don’t deserve to be there.”

Blackburn continued, “This is a great moment, I hope, for a lot of people that have been convicted on the basis of flawed science. I really think they have opened the door.”

Authored by Texas Sen. John Whitmire (D-Houston) and passed with bipartisan support during the 2013 legislative session, the law went into effect September 1. Criminal justice activists across the country are considering the “common-sense” law as a model, said Whitmire during a phone interview with the Current.

“I think we have a duty to allow people to be heard and for cases to be reviewed, certainly where there is credible information that shows faulty science was used to convict them. I’m pleased we passed the law and I think it’s just the beginning of a large number of cases in Texas,” said Whitmire.

The reason the legislation is “so dynamic,” he said, is that it requires a review. “What’s so neat about the law is that it just doesn’t leave it to the discretion the Court of Criminal Appeals, it says they shall have a hearing—so, it’s got some teeth in it, it’s got some force.”

Whitmire expressed his satisfaction with the SA Four’s release, but says they were just one of many examples brought to his attention when authoring the bill. The law could open the door for a review of hundreds of cases statewide, particularly of those involving arson, said Blackburn. Last year, Innocence Project Texas teamed up with the Texas State Fire Marshal and the (now reformed) Texas Forensic Science Commission to review arson convictions. He says the group expects to free several individuals who were falsely charged, pointing to the highly politicized and infamous Cameron Todd Willingham case.

“One wrongful conviction is too many,” said Whitmire. “I think we are going to see some best practices coming out of this legislation, some justice.”

In late October, SA Four attorneys Mike Ware and Keith Hampton filed writs of habeas corpus on behalf of the women, allowing them to be freed from detention based on inaccurate expert testimony and the introduction of previously unavailable scientific evidence—the first step to what Ware and others hope is full exoneration.

Both the attorneys and the women applauded Bexar County District Attorney Susan Reed and the appellate division’s Rico Valdez, for “embracing science” and being cooperative in the process—from securing an affidavit from Kellogg to digging up information. But not every prosecutor is like Reed, who was not the DA when the San Antonio Four case went to trial, cautioned Blackburn.

“We would thoroughly investigate the claim. We wouldn’t try to put up a roadblock when sharing what we knew with the defense. We tried to be professional about it and do the right thing,” said Reed in an interview with the Current. Reed says her department has always had a process for post-conviction review. “Some [DA departments] aren’t agreeable to reexamining a material valid point, I just have a different opinion.”

While Reed granted a new trial, setting in motion the opportunity for full exoneration, the final decision rests with Texas Court of Criminal Appeals, said Ware. A timeline for the hearing is unclear.

In the meantime, the four women remain faithful they will be officially vindicated.

“We never committed a crime and we want to make sure it’s clear,” said Ramirez. “We don’t want to live a lie, with stipulations or regulations or a title on us. That’s why the exoneration is so important.”

For now, Ramirez, Rivera, Mayhugh and Vasquez have their lives back. After missing births, deaths and milestones, they’re now able to participate in “all those things you take for granted,” as they put it. Ramirez heard her son say ‘I love you’ for the very first time. Rivera is finally getting the chance to spend precious moments with her two-year-old granddaughter, who waited for her grandmother outside the detention center obediently despite the numerous delays that pushed well into the evening.

“It was hard. I lost everything with my children,” said Rivera. “I had to watch them grow up through glass, through letters, through the phone. That’s the hardest thing a mother could deal with when you love your children so much. I think that’s what hurt the most.”

And as they await the appeals court verdict, there is little doubt the women will lose the resolve and determination that held them strong behind bars for so many years.