Newsmonger: Sanctuary Cities, a Gunman on Campus and the Spurs Drop the Opener 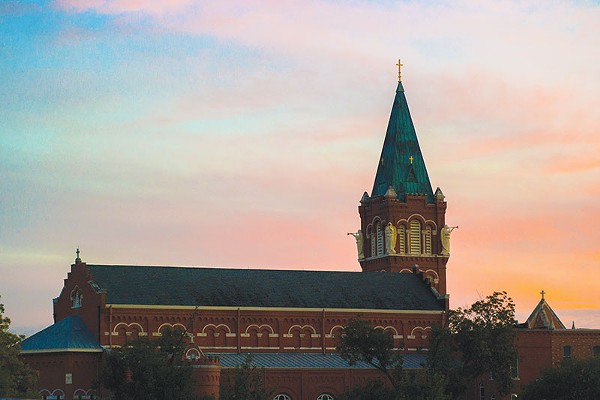 Courtesy
An alleged gunman was reported on the UIW campus Tuesday, but police didn’t find a suspect.

Is San Antonio a sanctuary city?

It's worth asking, since Gov. Greg Abbott is preparing to go to war with any municipality that doesn't nose into the citizenship status of its residents. Abbott supports banning sanctuary cities in Texas and expects the state Legislature to do so in 2017.

San Antonio hasn't officially declared itself a sanctuary city, but it has the characteristics of one. San Antonio Police Chief William McManus clarified his department's stance in a meeting of the City Council Governance Committee on Wednesday, October 28.

McManus said that his officers don't ask people about their immigration status. But if they arrest someone with a federal warrant who immigrated to the U.S. illegally, they'll notify the feds.

Mayor Ivy Taylor backs the approach, saying in a news release on the subject last week that "citizenship status is a federal matter and is not the role of our municipal police department."

"Our police department has to concentrate their efforts on answering service calls and ensuring the safest and best quality of life for our citizens," Taylor said. "However, we will not harbor criminals, nor will we protect them. What we will do is prosecute them, regardless of citizenship status."

Gunman at University of the Incarnate Word

Reports of a gunman on campus rattled the University of Incarnate the Word on Tuesday, October 27.

Campus police received several calls at around 5:40 p.m. Tuesday reporting an individual dressed in all black carrying two rifles. Law enforcement conducted a sweep of the campus but did not find a suspect.

Although police told people on campus to stay put during the sweep, the university was not technically on lockdown, according to UIW Police Chief Robert Chavez. Chavez said that his department's policy is to not institute a lockdown until they have confirmation of an active shooter.

Students, faculty and parents have questioned that move, as well as the manner in which UIW disseminated information. Chavez said that he will reevaluate the department's procedures.

"This is something that we're truly wanting to learn from," Chavez said in a press conference. "We're going to put things in place that make sense and that will help us in all these ways to protect our students."

The campus was locked down at around 1 a.m. Wednesday morning, when campus police received another report of an armed person on campus. Review of security footage revealed that it was just a security guard.

The good news: Basketball is finally back in San Antonio! The bad news: The Spurs won't be the first team in NBA history to go 82-0.

The Spurs dropped their season opener to the Oklahoma City Thunder by a score of 112-106 on Wednesday, October 28. It was a tight matchup as the teams swapped leads throughout, but miscues in crunch time doomed the Spurs.

But there were bright spots – or at least a bright spot – in the loss, namely small forward Kawhi Leonard. Spurs fans wondered in the off-season if the reigning Defensive Player of the Year's offensive game would ever catch up to his defensive capabilities. If the first game is any indication, it has.

Leonard dropped 32 points on the Thunder, netting 59 percent of his shots from the field. He was clearly the Silver and Black's first option all night. And with newcomer LaMarcus Aldridge (11 points) still getting into the groove, the Spurs will need that kind of production from Leonard.

"He's done that the whole preseason, and he's kind of morphed into that through his career. He's a confident player now and has worked on his game diligently," Spurs coach Gregg Poppovich said after the game. "He's arrived."