Northern Mexico makes its way to The Quarry 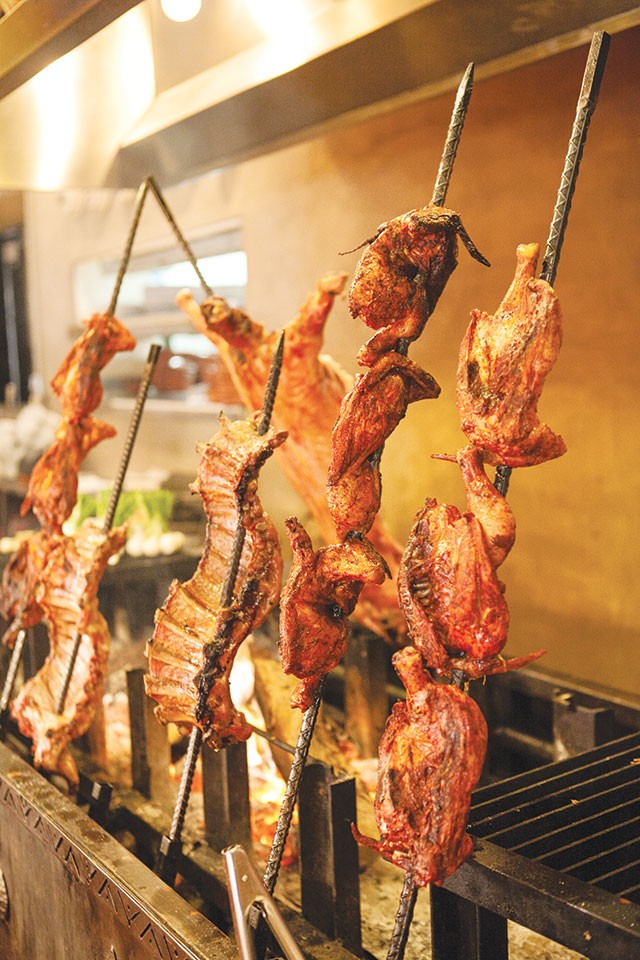 Johnny Hernandez knows how to design a restaurant. His is a detail-driven mind, and he genuinely loves every piece of artisanal work he brings into each of his eateries from the chairs at La Gloria to the iron fruit tree at The Fruteria and now the altar of angels that surrounds the grill at Hernandez’s latest, El Machito.

The restaurant blends a luchador-inspired style and the now-prevalent Dia De Los Muertos aesthetic. Again, Hernandez’s keen eye helps set this place apart. As far as northern Mexican-style eats, there’s nothing quite like El Machito, inside or out. The former Firebird Grill (and Stonewerks before then) dips into hacienda territory, and the shade from the surrounding trees makes the patio the place for happy hour or “hora feliz.”

And while it’s probably the most visually appealing of all of Hernandez’s joints, El Machito is also the most expensive and follows precedents set by its sister eateries. The menu includes botanas, tacos and quesos, Mexican-style grilled meats, and especialidades. Once again, chips and salsa are an extra charge (which is fine, they’re delicious); sides are also an added cost (first billed as $7 for a sharable portion and currently $3.50 for a smaller serving); and the menu includes a quarter of cabrito for $58. Let that sink in for a minute.

I stopped by on a Thursday night a few weeks after opening for a drink and a snack with a friend. As part of my first visit, we decided to order un poco de todo starting with a squeaky queso panela asado with tomato, piloncillo and chile de arbol jam and served with tortillas (which weren’t as pliable as we would have liked, but were far better on my second visit). We washed it down with El Machito-emblazoned clay mugs filled with the bar’s version of a Paloma with tequila and fresh grapefruit juice—refreshing and suitable for the patio.

As we grew more peckish, we decided to bite the bullet and order a parillada for two with pork ribs, sausage, chicken, shrimp and cecina asada de Yecapixtla—thinly sliced beef that’s been allowed to dry, coated in olive oil and fired over mesquite. Hernandez’s love of theatrics plays into presentation as well with the awe-inspiring bevy of meats served on an ornate large shallow dish along with grilled jalapeños, onion slices and green onions. The menu advertises the parillada for one or two guests, but the servings could have really served almost four. Tasty garlicky shrimp mingled with flavorful, dried chile-enhanced chicken and tender, yet crispy, pork ribs. On the cecina front, the moist, loaded portion made for excellent tacos with house green sauce and grilled onions.

The two missteps at dinner were the visually appealing chorizo verde of roasted poblanos, pork, cilantro and pumpkin seeds, which proved a bit dry, though the earthy notes were stellar. A $7 side of buttered corn was a bit ridiculo.

Perhaps the prices would be easier to swallow if I’d really paid attention to El Machito’s family-style dining concept and brought a bigger group to split the shareable dishes. As it were, I spent $46 on that first dinner alone.

My second visit proved even pricier as I set out to sample Hernandez’s locally sourced cabrito asado, available only at dinner. I consulted with my server on whether the quarter of the goat kid was a suitable choice for a solo diner and was told she’d “seen little old ladies take it down, but also couples share it.” Challenge accepted, except not really.

The sea salt-brined goat grilled over mesquite is quartered and what arrives is quite the meat fest. There’s a bit of leg, ribs, shoulder blade or lower back served along with the same accouterments as the parillada, and a small bed of iceberg lettuce and fresh guacamole. Try as I might, I came to the conclusion that the portion certainly was more than one average person could handle, and that perhaps our server was bluffing on the “little old lady” bit. Tender and just gamy enough? Yes. Juicy and moist? Most certainly. Worth $58? I’m not entirely sure.

Along with my $3 hora feliz Ruby Redbird and $3.50 side of arroz del dia, my tab totaled $69 without my 20 percent tip. The offerings were delicious, but not worth derailing my single-gal-about-town budget. I would love to regale you with details on other items (the fideo seco, any of the house specialties), but even your local alt-weekly food editor has some budgetary boundaries.

While definitely a giant step up from its precursors at the same location, El Machito adds fire-grilled flavors at a price.