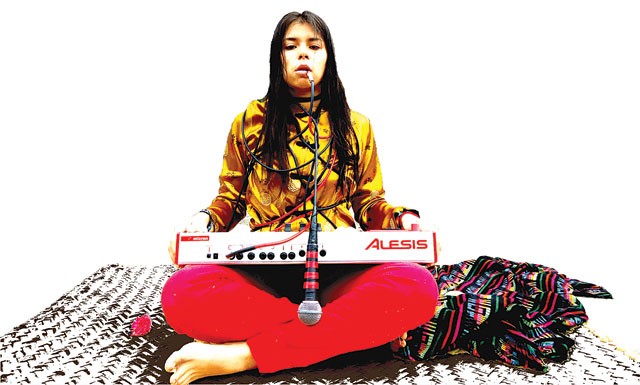 Even though the annual shadow cast by SXSW has receded, it often seems like San Antonio's musicians labor in the perennial penumbra of Austin's music scene. But it's always darkest before the dawn, which is precisely why music lovers should now bask in the rays shone on our none-too-shabby homegrown scene during the third-annual Local Music Week (LMW), which runs April 1-7. There are dozens of shows featuring varied genres, staged at venues across the city; too many to attend and hard to choose among. Our pick for this year's spotlight stealer, though, is young San Antonio native and full-time community activist Saakred, headlining at the Ten Eleven on the final Saturday of LMW. The 22-year-old solo performer generates experimental-sounding electronic melodies and remixed sound bytes with a synthesizer overlain by their reverberating, plaintive voice that can quickly shift into sharp Crass-like chanting.

When I went to meet them for an interview at the Esperanza Peace & Justice Center, I asked how I would recognize them. "Red legs," they texted, and I spent the drive picturing someone who had just waded through crimson Easter egg dye. It turned out just to be red pant legs, but relevant nonetheless: Saakred, in addition to evoking the spiritual dimension of their music, is spelled deliberately so as to pop the word "red" in echo of the Native American concept of the "Red Road."

The content of their songs is political: U.S. militarism, police brutality, ecology. But the follower of buddhism and practitioner of Native American spirituality enshrouds their lyrics with electro-mystic evocations of peace, community, and nature. Like most of the other bands in the night's lineup, Saakred — also a filmmaker who won an award at the Neighborhood Film Project last Saturday — was nurtured by hardcore punk as a young teen, and still considers their music punk, "just because it has the aspect of resistance; that to me is what punk rock is."   Don't expect a slam pit to erupt during their hypnotic segment, though. "Just judging by the recent response of my shows, people definitely get a sense of that passion, but some sense of spirituality, even if they are not spiritual," she says. "[My music] transcends something inside them; it's transcendent in nature."

She's only been doing music for about two years, and their first CD is due out in May.

"I have dedicated this next year to really putting my music out there."

The warm-up acts include The Offbeats, who, like Saakred, tap into old-school punk influences, but unlike them have gravitated toward a rawer, garage-noise post-punk rock style.

Búho, probably the most musically proficient band of the night, delivers a dense wall-of-sound noise in the tradition of Unwound, Autolux, Blonde Redhead, and Deerhoof. The one act of the night that will deliver an unapologetic hardcore style will be the Zukinis, a local favorite in the punk scene known to stage dive into the occasional Misfits cover: heavy on authenticity, light on innovation.

The Great N.I.S., a lyrical hip-hop artist and producer, and the organizing mind that pulled these diverse bands together for the show, will kick off the evening with his TMI personal diatribes.

"I'm sure others have gotten stabbed in the back and cheated or lied to so many can relate," he says of his songs. "I just do it in a funny, vulgar way because of the hurt and pain." Backing NIS (which stands for Nothing Is Something) will be experimental DJs dtronik and Apeshit, an extremely versatile and technically brilliant team that in their own shows play "dubby crunk-tronica and illmatic electro."

So if you're still pining because you missed Bruce Springsteen at the SXSW this year, smack your face, scream, chant or rap three times, "music is about creativity, not celebrity; about musicians, not the industry," and then go see this show. •