Oak Hills Tavern: The Med Center dive will lift your spirits, too 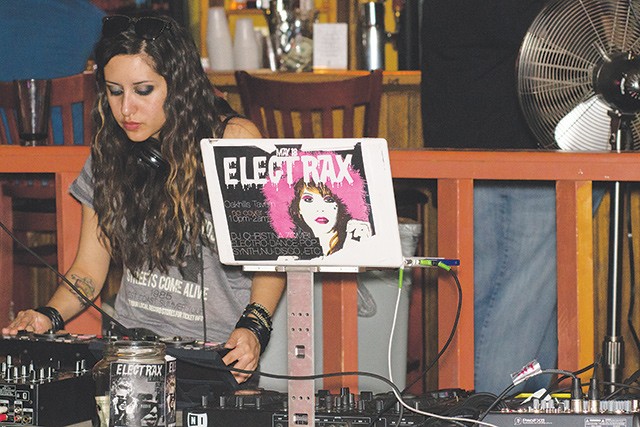 The so-called Supermoon illuminates our steps in the otherwise lightless back lot hidden behind Oak Hills Tavern. As luck would have it, my cohort for this Saturday night, Mr. Angotti, used to, according to him, frequent this bar “about six or seven years ago.” If his memory holds, we should be able to safely make our way to the back entrance before something sinister happens. Our mission is simple: have one beer and survive an hour of the Madonna tribute night. We can only hope it’s ’80s Madonna and not whatever it is she’s been doing the last 30 or so years.

We follow the synth-pop sounds into the backyard of a big house and then up a few steps inside, going immediately to the bar. After some consideration, Mr. Angotti orders us a round of Branchline Brewing’s Evil Owl Amber. The beer selection is better than expected. We take a seat on the side of the bar, somewhat away from everyone else, between a monster truck gaming machine and a television playing Will Smith’s steampunk western action-comedy masterpiece, Wild Wild West. Across the room, a mix of Top of the Pops, ’80s commercials, Madonna interviews, music videos, etc. are projected onto a sheet. I turn to Mr. Angotti and ask, “Would you describe this as ramshackle?”

The crowd is still lightly dispersed among the front and back courtyards, around the bar, and out on the main floor. A collection of pop art is scattered across the pool table.

“Are those coke mirrors?” Mr. Angotti asks. I’m unsure if he’s serious or not. We decide to investigate. I haven’t seen one of those since I won a Metallica Ride the Lightning mirror as a naïve kid at a carnival. We get another round of beers before heading over. Turns out they are just framed prints.

Disappointed, we venture out front to witness what’s happening with the Supermoon. It is a little bit higher in the sky, perhaps bigger, but rather unimpressive for the title. Back inside, a few people dance. The crowd grows. It is a mix of goths, LGBT bar-goers, a guy in a fluorescent-colored Polo shirt and Ray-Bans, some older regulars, and a mix of Madonna lookalikes.

By our third round of beers, something almost imperceptible has snuck up on us – a sea change occurs. The upbeat music and genuinely good demeanor of patrons and staff has lifted our jaded spirits. There aren’t enough people dancing for us to brave those treacherous waters, but if there were, it’s completely reasonable to imagine ourselves out there, flailing our limbs in that ’80s way, with the white-laced gloved folks.

A song comes on I haven’t heard in years: Bollock Brothers’ “Harley David (Son of a Bitch).” The DJs must be commended. I approach the two young women, DJs Christina Zombi and Mighty Iris. They share a small table near the back entrance. Iris plays primarily on Fridays, but she’s here to help Zombi with the tribute night. Zombi has done a Robert Smith/Cure tribute already and she has plans for David Bowie and Prince tributes under the banner Electrax.

“I wanted something interactive and fun,” Zombi tells me. “I want to bring that nostalgia but also show what is new and fresh.”

I’m intrigued by this concept of nostalgia. I press further. “What is your earliest memory of Madonna? What drew you to her?”

“The provocative ‘Open Your Heart’ video was running on MTV. Her private peep show/striptease stuck in my head as a child,” Zombi says. “I knew it was taboo and loved it for that quality.”

Mr. Angotti and I sit outside with our fifth or sixth beer. I hear the sound of a screeching saxophone and I’m transported back to the Santa Cruz Boardwalk. Those familiar with the movie The Lost Boys would recognize it as the song “I Still Believe,” in which a bare-chested man sings between playing the sax and gyrating. I run inside. DJ Mighty Iris laughs, pleased that I catch her joke. I realize why the patrons here are happy. There is nostalgia, certainly, but there is no scene, no one to impress, and that’s incredibly freeing.

“That’s how I felt when I first started going to Oak Hills,” Iris says. “It’s always a good time. You go in, and leave with three new friends.”

I may have found a new favorite bar and a few new friends.