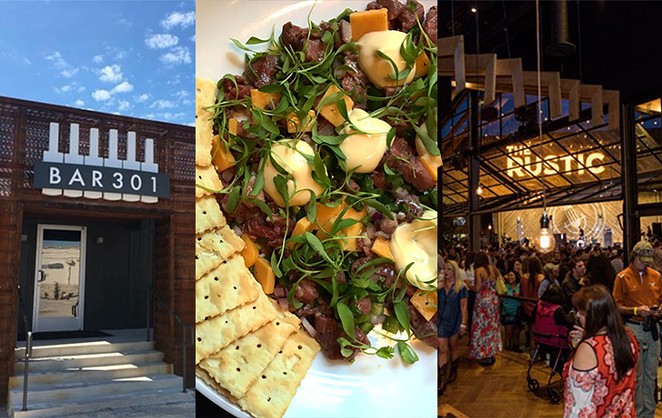 We've got a slew of new restaurants in town (along with a few bummer closures), here's a quick recap of San Antonio's latest eateries.

Rosella at the Rand opened with coffee, breakfast, lunch and dinner along with cocktails, wine and beer inside a modern space at the corner of Soledad and Houston. Find them at 114 E. Houston St., (210) 277-8574.

Breathe Lounge opened near the airport with happy hour and funky programming including a singles masquerade affair on November 11 and a fashion show December 2. Find them at 8800 Broadway, Suite 102.

Squeezers Co. added a new tenant to its home with Espressivo Coffee, opened by two baristas formerly at Halcyon. The coffee joint joins a yoga studio and the aforementioned juice shop at the location. Find them at 317 Probandt, (210) 560-4669.

Part music venue, part restaurant and bearing several bars, Dallas-based The Rustic opened with a concert by co-owner Pat Green, shuttered for a few days to clear up permitting issues and then finally opened for good. Find them at
17619 La Cantera Pkwy., Suite 204, (210) 245-7500.

The Barrios empire expanded by one with the addition of La Hacienda Scenic Loop inside the former Scenic Loop Cafe. The space serves Sunday brunch with a combination of items from its new and former owners. Find them at 25615 Boerne Stage Road, (210) 687-1818.

A year after a nasty fire put its kitchen out of commission, Francis Bogside reopened its doors on Halloween. The bar now has expanded seating and a new chef in Chris Cook. Find them at 803 S. St. Marys St., (210) 988-3093.

Pollos Asados Los Norteños is temporarily closed due to an ongoing legal battle over what neighbors and perhaps the state deem as excessive smoke.

After three years in business, Tacos N Tequila pulled the plug on its San Antonio location. The Dallas and Austin location are still open.

Bryan-based Napa Flats closed its San Antonio location in late October. The shop had occupied the space since early 2015.

Press Coffee closed its doors and will move to mobile operations in the coming months.

Chris Madrid's is temporarily closed due to a mid-October fire. Follow them on Facebook for more updates.