On the Rocks: The tyranny of candy-colored cherries and blue-cheese-stuffed olives 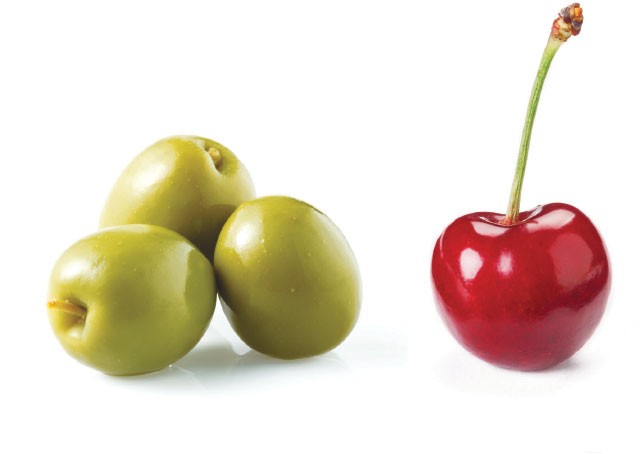 “You shouldn’t have to shove the garnish out of the way to get to the drink,” said Dorcol Distillery bartender Nick Kenna. That means you, Carmen Miranda cocktails—tiki and bloody alike (with or without paper umbrellas). You, too, craft concoctions with slabs of orange peel as big as the side of a ship.

A garnish is “an accouterment,” said Kenna, implying that it should support a well-made cocktail but can’t be expected to mask a crappy one. Which leads us straight to the cherry, right?

The classic Manhattan is a Platonic drink: bourbon (or rye), sweet vermouth, Angostura bitters and a garnish of maraschino cherries. Just not those cherries. Even the best of the commercial kind list high fructose corn syrup, “natural and artificial flavor,” potassium sorbate and red No. 40 among the ingredients. Should a ‘tender slip one of these fluorescent bombs into your ‘hattan, remove it immediately (and indignantly). The cherry of recent craft cocktail choice is Luxardo’s (“the original”) from Italy. These babies, preserved in the firm’s famed cherry liqueur, are even advertised for the Manhattan, and I’m happy to have them. But today’s smart money also admits of another Italian import: the Amarena Fabri. “I did a blind tasting [with Luxardo], and everybody preferred the Fabri,” says Gaucho Gourmet’s Luciano Ciorciari, who has taken it upon himself to convert the heretofore uninformed.

The martini is another cocktail that invites excess in garnishing—and here I’m speaking of spears of multiple, blue-cheese-stuffed olives, among other possible offenses (though I’m guilty of using pleated pieces of pickled ginger). If doing your drink at home, look for a simple (not huge—and also not garlic-stuffed) pitted green olive such as the Mt. Athos at Central Market or Whole Foods. The brininess of the olive only enhances the gin (you are using gin, right?); cheese muddies it. A snappy cocktail onion (often preserved in vermouth) single-handedly turns a martini into a Gibson. But, while both olive and onion are supporting, if essential, players in a martini/Gibson, a strip or swath of lemon is another matter, here and elsewhere. Citrus peel is the ultimate double-duty garnish. (We will admit that mint, both muddled then added fresh for fragrance, also plays plural parts.)

Here’s why: Citrus (we’re especially impressed by the continuous spiral used in the Horse’s Neck–no, do not think The Godfather), is pretty in the glass, but when squeezed over the drink first to express its oils, becomes an integral part—just like bitters. Rubbing the skin on the rim of the glass adds another layer. Flaming an orange peel, achieved by squeezing a swath in one hand while igniting it with a lighter held in the other, caramelizes the expressed oils and is especially rewarding with rye- and bourbon-based drinks. Caramel, not Carmen, in other words.