On Trend: These evolutions dominated the San Antonio bar and beverage scene in 2021 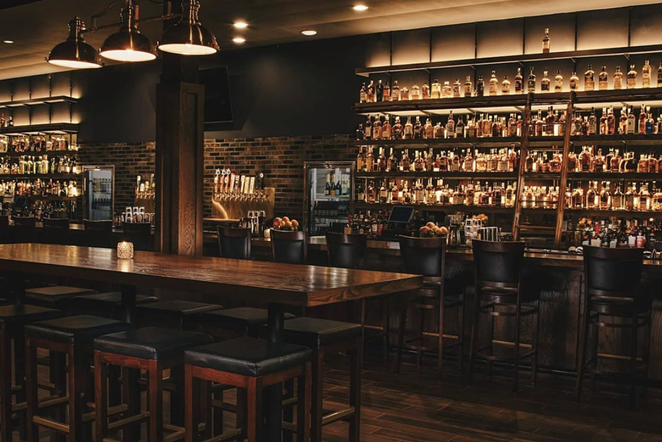 Instagram / rockandryebar
Proprietor Don Marsh’s latest enterprise, Rock and Rye, at The Rim is a great stop for scotch.
From cultivated lowbrow aesthetics to a growing cluster of adventurous drinking spots south of downtown, these trends defined the boozy end of San Antonio’s food scene in 2021. Pour yourself a drink and let’s run them down.

William Menger started making beer in a basement connected to what became the Menger Hotel in the early 1850s, and by the early 1900s, San Antonio boasted some of the state’s largest and most successful breweries. It’s only taken 100 years, but it appears that the Alamo City is once again poised to become a brewing powerhouse.

At least in numbers. Inside 1604 alone there at least 16 breweries of varying sizes and ambitions. And while the craft’s local pioneers were largely German immigrants, the latest crop is far more diverse. Joey Villareal kickstarted the craft movement in 1996 with the founding of Blue Star Brewing. Since then, Freetail Brewing took flight in 2008, and brewery-distillery Ranger Creek was established in 2010. Alamo Brewing, now in impressive digs on the near East Side, launched its label in 2014, while Dorćol Distilling and Brewing started distilling in 2013 and later added Highwheel Beer to the mix.

And these are just the bigger guys.

Small but scrappy Islla St. Brewing serves South Texas-inspired suds — including one that smells, looks and tastes uncannily like a certain red cream soda — out of a modest taproom set with picnic tables. Weathered Souls has made a national name for itself with its Black Is Beautiful initiative. Downtown’s Roadmap draws customers with a wall of taps that reads like a hit parade of local favorites: New England and Double IPAs, a dry-hopped Pilsner, Blonde Ale, Kettle Sours, Hefeweizen. Food is front and center and the city’s most impressively appointed operation, Southerleigh Fine Food and Brewery — which happens to occupy the original Pearl Brewhouse, built in 1894. We’ve come a long way, only to look back.

Let’s acknowledge something from the get-go. There’s “high” design, of which San Antonio has precious few examples in the hospitality realm, and there’s “low” design, of which we have a ton — both purposeful and accidental. The accidental lows are worth examining another time. To point out just one example of the purposeful low, which might best be called “high-low,” let’s look at Little Death on North St. Mary’s Street. It’s the architectural equivalent of a tattooed sideshow performer with no square inch left uninked — great as a one-off riff on graffiti, but maybe not sustainable as a trend.

Moving up the aspirational scale, we come to Hot Joy, the interior equivalent of Little Death’s exterior, with every surface — some of them inspired by tattoos — meticulously embellished with Asian themes and artifacts by designer Greg Mannino. It’s perhaps the city’s most fully realized work of interior imagination. The only competition there might well be the more recent Hugman’s Oasis on the River Walk, an ultra-atmospheric tiki den sporting tropes from skulls to South Seas shields and grottoes to palm-thatch huts. And all of that with suitably garish mugs and drinks that flame, of course.

Less flamboyant, but still a fully imagined concept, is Best Quality Daughter, a former brewery and BBQ joint at the Pearl which the interiors team at local architecture firm Lake | Flato turned into a whimsically wallpapered jewel box for just-precious-enough Asian food. Anyone in need of convincing that pastels can be powerful when used right need only pay a visit. In contrast, the steampunk strength of Sernewirthe at the Pearl was realized with the almost unfair advantage of existing atmospherics such as macho machinery and brew tanks — though the design team used it all to good advantage.

In a more conservative vein, it’s worth looking at a restaurant design that breaks no new ground but treats historic motifs with care and finesse: Brasserie Mon Chou Chou. The burnished interior pushes many brasserie buttons — marble, brass trim, bistro chairs, mosaic floors — without ever coming across as a cartoon. Everything has been considered down to the plates and the aproned servers.

It is, of course, a reflection of a Paris of the past. We’re still waiting for the perfect evocation of a San Antonio of today.

San Antonio’s Southtown-King William area has emerged as largely walkable cocktail confluence. Some of the city’s best bars — and restaurants with good bars — are situated here. However, be warned: there are more than most humans could handle in a single pub crawl.

Starting at the north end, there’s the bar at Mixtli. Set apart from the dining space, and with an entrance off South Presa Street, no reservations are required at this diminutive hideout dominated by a color-changing “cloud” symbolic of the restaurant’s ever-changing, regional modern-Mexican theme. The bar’s menu, along with its limited snacks, is nominally keyed to that of the restaurant, so it will change. Mixtli’s Oaxacan Old Fashioned, with both mezcal and tequila, is a recommended starting point. So is the cinnamon-accented Tascalate, which will introduce you to Nixta corn liqueur. It tastes and smells for all the world exactly like sweetened, fresh masa.

Nearby, Pharm Table also plays with unexpected spirits from points south at its smartly done bar-dining space. Charanda de Michoacan rum figures in the Caña Mexicana, along with a Oaxacan aguardiente and piloncillo, while the Equinox Sour includes Peruvian Pisco, ruby port and puckery sumac. For the designated walker, there’s also a short list of zero-proof cocktails starting with the on-tap house turmeric ginger “beer,” and including a Seedlip N/A-groni.

In contrast to Mixtli and Pharm, Amor Eterno’s interior comes across as an eclectic parlor with furnishings of an eccentric granny bent. The menu is a little less focused, too, but the drinks are well-executed. The mojito takes a deeper twist with dark rum and turbinado sugar, the Algonquin adds pineapple to a mix of rye and dry vermouth and Where the Buffalo Roam takes a buffalo grass-infused vodka and teams it with pear, lemon grass and cider.

Slip through a parking lot and you’re at Maverick Texas Brasserie. The copper-topped bar is the first thing you see in the sultry space. Maverick got creative during peak pandemic and offered curbside and delivery kits of cocktails such as the Dead Poet with tequila, vermouth, mezcal, bénédictine, yellow chartreuse and orange bitters. There’s an extensive wine list, too, but this is the kind of bar where the ’tenders do rise to your challenges. Ask them for the likes of an Aviation or a Hemingway daiquiri.

Francis Bogside is now just across the street. Though the food menu isn’t as ambitious as it once was, the pub grub is more than adequate, and we’re here for the booze and the generous happy hours — all day Sunday and Monday, for example. Unique drinks include the Stiffmeister with bourbon, brandy, Benedictine and Islay scotch or the Suze’n Sarandon with Kinsman Rakia, gin, Suze and Squirt. We suggest fried pickles or truffle fries no matter what you’re drinking.

Newcomer Bar Loretta lies a little more than a block away. To all appearances, it’s more of a restaurant than a bar, but you’ll be happy to have the kitchen if you order the city’s best tater tots with caviar as your snack. They’re $15 but worth it. Bar service is friendly and competent too. A section of cocktails plays with the theme of Buc-ee’s products such as beef jerky. But to balance that, there’s also a list of variations on a theme of the Manhattan — from which the Bobby Burns with Compass Box’s Artist’s Blend is especially good.

From here, the aforementioned Hot Joy is a hop, skip and a jump. Its kitchen is hit-or-miss these days, but shrimp chips or crispy cumin pork dumplings should go with anything tiki inspired. Try the International Waters with gin, aquavit, blue Curaçao and lemon oleo-saccharum. Or perhaps the Rhubarbra Streisland with Mexican rum, mezcal, rhubarb and lime. More straightforward daiquiris and the likes of a Painkiller or an Island Mule are all good happy hour choices.

According to serial bar developer Jeret Peña, people have lost interest crafty cocktails. Which is why he’s banking on going back to the dad-based basics such as highballs for his latest operation, Three Star Bar on Grayson Street. It’s opposite another of his concepts, Hello Paradise. Think Cuba Libre with standard Coca-Cola or a gin and tonic with added pickle juice. Equally modest grub accompanies those lowbrow offerings: meatball sandwiches, a grilled cheese on jalapeño cheddar bread, burgers and tater tots.

A trend in the making? Could be, but if keep-your-booze-basic is becoming a mantra, we do have a suggestion: seek out bars that have well-curated drinks you can knock back — or sip, your choice — in shots. What follows is a list of those at the forefront.

Scotch: You can do no better than Bar 1919 in Blue Star or proprietor Don Marsh’s latest enterprise, Rock and Rye, at The Rim. Online, you’ll be scrolling forever just to get through the whisk(e)ys — and that’s before you even come to the scotches. To pick a category — and you should — there are 50 or so single malt entries from coastal Islay alone. A pour in a proper Glencairn tasting glass will cost anywhere from $12 to $700. Nobody said simple was necessarily cheap.

Sake: New Japanese restaurant Shiro serves some of the city’s freshest and most artfully crafted sushi, so it should come as no surprise that its sake menu is equally thoughtful. The junmai designation simply means “pure rice,” though there are subcategories based on the degree of milling the base rice undergoes. There are cloudy sake and sparkling ones. Most will be served cold. At the bottom of the list, the Hakutsuru Little Lilly is soft and cloudy, a beautiful contrast to the sparkling variety. Be prepared to spend from $10 to $165 for a bottle, the latter a splurge you might want to save for date night under the pink neon.

Sherry: Since it was the only bar outside of the East Coast to participate in esteemed Spanish producer Bodegas Lustau’s International Sherry week, which fell in November, Downstairs at the Esquire should be your one-stop shop for sherries of all stripes — either in cocktails or straight up. Look for the full range of styles by the glass or bottle, from crackling dry fino and manzanilla to unctuous oloroso and Pedro Ximénez. One good choice, if available, is the minimally filtered Gonzalo Byass Tio Pepe Fino en Rama. It’s not your maiden aunt’s tipple.

Mezcal and Tequila: Whether of beer, wine or spirits, flights are fun. You can put together your own of mezcal or tequila version at Mexican restaurant Cuishe’s two locations, either in St. Paul Square or on Loop 1604. The pours come in one or two ounces from its respective Destilados de Agave lists. The spots serve 25 kinds of the most basic variety of Mezcal, espadin, while tobalá gets six and cuishe — the source of the restaurant’s name — gets six more. Mezcal-adjacent spirits such as raicilla and bacanora are also available. And tequila’s extra-añejo category alone flaunts 10 selections. Have at it with bar snacks that include diminutive tacos de canasta or bichos — fried crickets served with guacamole. This is a trend San Antonio should surely embrace.