Open Carry Is Legal on the Museum and Mission Reaches 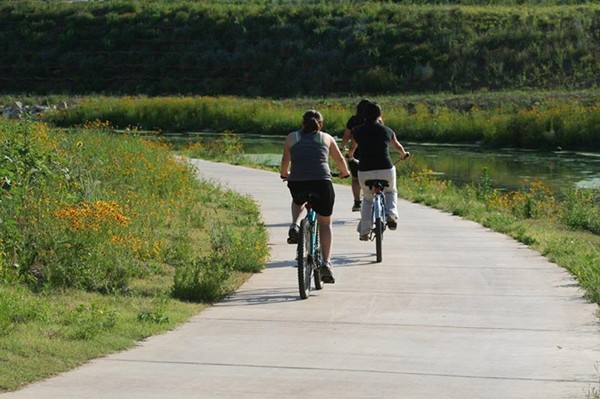 San Antonio River Authority | Facebook
Don't call the cops if you see someone openly carrying a handgun on the Museum or Mission Reach. Texas law actually allows it.
Because guns need to be absolutely everywhere all the time to keep us safe from the terrorists, Texas Attorney General Ken Paxton has fired off an opinion saying that river authorities that attempt to prohibit open carry are breaking the law.

OK, so the ruling doesn't say all that stuff about terrorists and guns being the only way to stay safe, but you get the idea. Open carry proponents have loudly preached how they want to be able to tote firearms wherever they want.

However, any river authority that does attempt to prohibit open carry in its parks is breaking the law because Texas' open carry legislation stipulates that government entities may not bar people from openly carrying firearms, except in specific, special circumstances — like schools or in a courtroom.

Nope. Paxton's office didn't buy it. And so, that river authority won't be able to adopt a rule — like it was considering — that prohibits open carry.

We got to wondering whether the San Antonio River Authority had any policies around open carry. They confirmed that they don't. And Paxton's answer to the Lavaca-Navidad River Authority makes it clear that SARA couldn't prohibit people from openly carrying handguns in popular places like the Museum or Mission Reach even if it wanted to.

So, if you see someone with a holstered handgun on the Museum or Mission Reach, don't be surprised, like the international tourists or visitors from more liberal areas of the country are likely to be.

Texas' law has prompted a bunch of inquiries like the Lavaca-Navidad River Authority's request for clarification from the AG's office, including one that determined Lone Star State psychiatric hospitals cannot prohibit open carry.

And come August, gun lust spills onto college campuses. The last Legislature also approved campus carry (those handguns have to be concealed).

Why anyone would feel the need to open carry for a pleasant stroll along the Museum or Mission Reach is beyond us. Open carry is definitely not going away any time soon, and its passage leads to unintended consequences in the state, like people being allowed to bring guns into psychiatric hospitals, parks and — if licensed holders feel so inclined — to popular tubing spots managed by the Guadalupe-Blanco River Authority. All places that were once traditionally gun-free.