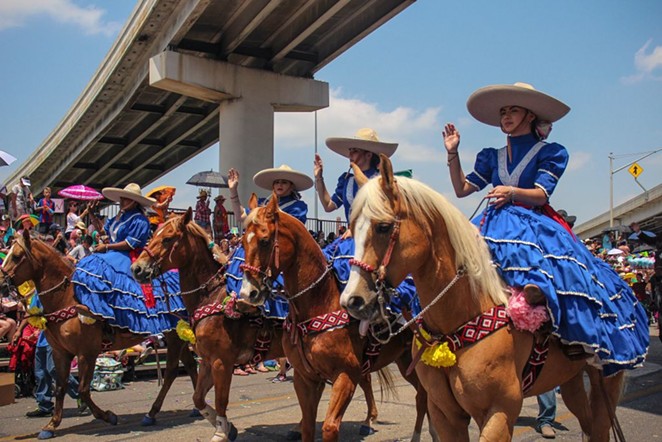 San Antonio Current Promotions Team
The Battle of Flowers Parade, the oldest event part of the celebrations, will begin in the morning due to a record number of participants. Oh, and because the Texas heat is a bit too much.

Organizers of the parade announced Tuesday that this year's event will begin at 9:05 a.m. with more than 2,500 participants. The parade has traditionally started around noon, though it's not clear whether the time change will be just this year or a new trend.

In coordination with the tricentennial, this year's theme is "300 Timeless Treasures." According to the BOF website, the 2018 parade will include the largest number of Vanguard participants as well as the highest number of float entries. The parade has been an annual tradition every year since 1891, with the exception being during World Wars I and II.

San Antonio Current Promotions Team
I'm sweating just imagining wearing all this AND walking the parade.
In addition to the massive amount of participation, organizers told KSAT that the time change will mean attendees and participants alike won't have to put up with scorching temperatures. They hope having the bulk of the parade in the morning will mean everyone will have a more enjoyable experience. Not roasting in the sun does sound enticing.

And because San Antonio is going all out for the city's tricentennial, the parade will also feature a new section called "Simplemente San Antonio" that will kick off at the Grayson and Broadway intersection at 9:30 a.m. A vague description of the BOF website says this new feature will honor San Antonio heroes. According to the San Antonio Express-News, "Simplemente" will pay tribute to "first responders, city officials and a 'few hero surprises.'"

An official ribbon cutting for the parade will take place at Maverick Park at the Jones and Broadway intersection at 10 a.m. While some tickets have a starting time for 10 a.m., organizers told KSAT that they are spreading the word about the time change. You can purchase tickets here.