Our Favorite Bands for Halloween: CocoRosie 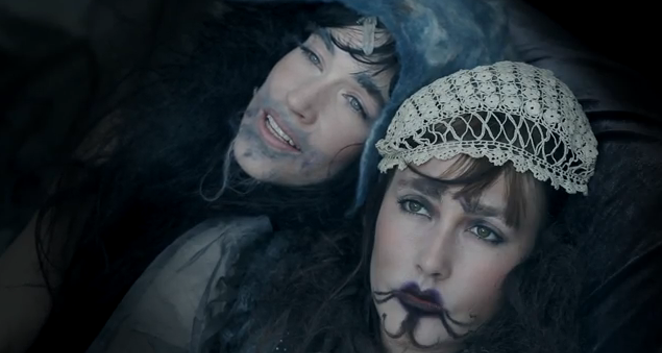 While not scary like a typical slasher flick, CocoRosie is chillingly subtle like a psychological thriller and gruesomely beautiful like gothic horror fiction - compared to the pop-up scares of the Misfits, the Cramps, or even the shit-slinging GG Allin.

A sister duo formed by Sierra and Bianca Casady, CocoRosie’s dynamics lie in direct contradiction: the pair’s vocals and styles are polar opposites of each other. Sierra’s an operatic songbird who gives CocoRosie a classically, traditional grace while Bianca’s almost childlike, wounded, creepy-like-an-abandoned-baby-doll voice, is what merits their “freak folk” title. Taking cues from opera, hip-hop (complete with a beatboxer) and electronica, the sisters Casady have built a repertoire of instruments including children’s toys and a tinkling piano that is both unsettling and haunting. The majority of the CocoRosie catalog’s themes cover very real issues such as child brides, feminism, and domestic abuse (which is often confused as a love song.)

“Lemonade” is a prime example of CocoRosie in their prime, with jazzy sax in the bright, sunny chorus, reminiscent of days past, and spooky, growled verses. The symbolically rich video is a high production journey through an archaic, second empire-styled house that's definitely more spine-chilling than The Haunting remake, with the sisters rockin’ whispy, pubescent, wizard beards.

Off of CocoRosie’s third LP, The Adventures of Ghosthorse and Stillborn, is “Werewolf,” a stunningly brutal, yet polarizing epic that’s ethereal beauty can be compared to a lucid dream - or nightmare. The wounds in "Werewolf" aren't caused by razor sharp claws, and it's not the kind of monster that can be killed by silver bullets. The lyrics are the kind that can be interpreted and analyzed in the vein of “Daddy” by poet Sylvia Plath. Both the song and the poem deal with a troubled father figure who then influences their love life. Because music is basically poetry, “Daddy” and “Werewolf’s” themes are nearly identical, “He had your hands and my father’s face/Another western vampire, different time, same place” and “If I’ve killed one man, I’ve killed two/The vampire who said he was you.” The only difference is that Plath doesn’t write about sucking dick.