Courtesy of KOKOFREAKBEAN
San Antonio artist KOKOFREAKBEAN is best summed up in three words:
What. The. Fuck?

In the most complimentary use of the term, KOKOFREAKBEAN is a 32-year-old weirdo who makes dense and challenging computer animation and avant-garde music. If for no other reason than to challenge his own creative boundaries and attempt to push the entire art realm into new territories, both are absolutely deserving of wider attention.

The artist’s visual work is primarily delivered in the form of bright and intense digital animation made up of what looks like random shapes from video games. Taken together, they seem to convey a statement the constant barrage of information that humans must contend with daily.


Kind of a Hermit

Born and raised in the Alamo City, Michael Vasquez came up with his strange pseudonym in his teens because of its phonetic appeal, and it seems to suit the offbeat images and sounds he creates.

But the handle isn’t the only odd thing about KOKOFREAKBEAN. The artist not only refuses to show his face in interviews, photos or videos, he even wishes he could remain so anonymous that his gender remains a mystery.

The only reason he hasn’t gone that far is because he’s afraid people might attribute his art to someone else.

“I’m kind of a hermit and I’ve always been a hermit, and I don’t really like people, and that’s one of the reasons I don’t like showing my face in anything,” he said in a phone interview.

Growing up, KOKOFREAKBEAN drew cartoons as an artistic outlet. But it was in the early 2000s, while attending Clark High School, that he was first introduced to Photoshop and saw the unlimited potential of digital manipulation.

“That whole year I just learned how to use Photoshop, and that’s where I started making these collages,” he said. “Then, when I learned about [video graphics program] After Effects, it blew my mind that I could create these movements, environments and people.

“I realized that I could be completely omnipotent.” 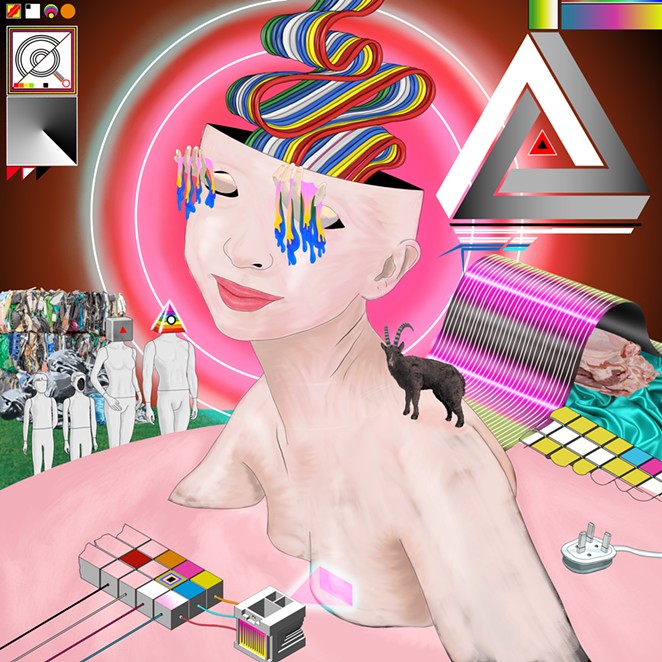 Courtesy of KOKOFREAKBEAN
In 2012, KOKOFREAKBEAN took a semester off from UTSA to finish an animation project called “God Knox,” on which he’d already toiled for eight months. He decided it would be worth sacrificing a semester of school to finish.

Turns out, he was right.

“The first day it was released [on YouTube], it didn’t really do much, and I was like, ‘Fuck,’ and that really hurt,” he said.

However, the next morning, KOKOFREAKBEAN woke up to hundreds of subscriptions on his YouTube account and even more views of the roughly two-minute video. He attributes the attention to Cyriak, a famous UK animator, who reposted the work.

Dave Hughes, who runs Off the Air, a show on Adult Swim, also caught wind of “God Knox” and licensed the piece for his program.

KOKOFREAKBEAN has since been providing work to Adult Swim on an on-and-off basis. As a result, he was able to stop delivering pizzas and selling solar door-to-door and live primarily off his art. He never returned to UTSA.

“To me, creating art is refining your ability to determine what appeals to you,” he said. “And that level of refinement determines the level of quality you’re trying to create.”

That philosophy explains a lot about the complexity and intricacies not of only KOKOFREAKBEAN’s visual art but also the music he creates — some of which serves as the audio backdrop for his animation.

Drawing influence from sources as diverse as math rock band Hella, death metal giants Cryptopsy and glitch producer Aphex Twin, Super Buff is an accurate audio reflection of the genius that is KOKOFREAKBEAN.

Calling himself Zlod the Demultiplexer for the project and arming himself with a guitar, the artist and drummer Ethan Campa bash out harsh, charging music that veers between metal, noise rock and the avant-garde. While the violent blows they exchange may seem random, they’re actually carefully crafted and executed with precise intent.

His project Computer Jesus Refrigerator, started in the early 2000s and now on hiatus, specializes in experimental, often harsh-sounding pieces making use of synth and 16-bit noises. Adding to the complexity are its dense, sometimes-absurd time signatures.

KOKOFREAKBEAN said much of the music being made today pays homage to work that’s already been created. He’s more concerned with pushing the artform into undiscovered territory.

“I’ve always been interested in esoteric, noisy, complicated music,” he said. “I want my life to have been in service to the enrichment of art culture. My goal has always been to make something undeniable, because I want a legacy. I want something to live beyond me.”

KOKOFREAKBEAN added that he’s yet to create his best work. His ultimate goal is to get hired to work on a film that would make use of all his skill sets — something he said he’s working toward with his contributions to Adult Swim.

“I just want to make something truly different and transcendent,” he said.