It was really unfair, all of it. With the only criterion being to present wines that should be oyster-friendly, flavors and aromas were all over the map, making evaluation an exercise in focus and filtering. But why stop there? Omniboire also introduced actual oysters — eight varieties, each with its own flavor profile. Just to complicate the issue.

One of the few places this could have been done with any ease was Sandbar, and though he couldn’t be there, Andrew Weissman graciously volunteered the premises. Showing up for the challenge were James Martin, Sandbar’s engaging waiter (Sandbar’s only waiter, it should be noted), resident hyper-palate (and personality) Joe Baker of Gabriel’s, and our very own editor, Elaine Wolff — who actually admits to liking whites as much as reds, thus making her an anomaly among my acquaintances. We sat down to nine wines, poured blind as usual, and here are the results. Let’s see if we can make any sense of this whatsoever.

We tasted first without regard to the oysters, so it’s perhaps not surprising that the more assertive wines, the ones with big aromas and pronounced flavors, ended up on top. Showing that New Zealand has gone well beyond the sauvignon blanc grapefruit and grass bombs that burst upon the world a decade or so ago, two kiwi wines shared the limelight. As it were. Of the top-rated ’06 Craggy Range Martinborough Sauvignon Blanc, Baker proclaimed, “It has a graceful texture `with` beautifully integrated acid and fruit — a pure-fruited wine.” Omniboire (that’s me, of course) loved its tropical nose and passion-fruit palate, while Madame Editor also loved the nose but found the wine a little sweet on the tongue. Martin accorded it a “tapered” finish, and though I’m not sure what that means, I like the sound
of it.

White flowers and “sweet grass” (I’m not sure what this is either, but again the term sounds authoritative) were detected by Wolff in the number two-rated wine, the ’06 Koura Bay Atwatere Valley Marlborough. This was a wine for sauvignon-blanc purists — those who get off on emphatic (but beautifully modulated) citrus. In fact it had “great purity and balance” with notes of candied citron, according to Baker — who also dared to call it “tangy,” a word this writer is usually reluctant to use.

Tangy is not a term that comes to bear upon pinot grigio — not even on a classically made pinot from Friuli. Baker and Martin were in complete accord over the yeasty, Burgundian quality of the 2006 Pighin Fruili Grave DOC. “Burgundian style with a range of yeasts,” claimed Martin; “a yeasty nose `plus` candied almonds and violets ... like a good Macon,” countered Baker, upping the ante. My “white flowers” were Wolff’s “waxy nose,” and while nobody thought this wine typical of most pino grigios, we obviously all liked it.

The number-four wine, a total change of pace, was also regarded from several different points of view. “A slight funk but OK for all that,” said Omniboire. Tweaking this comment as editors are wont to do, Wolff found this ’06 Rias Baixas Albariño from Pazo Señorans to be “feral — like the bottom note of a perfume.” Martin, on the other hand deemed the wine “playful and soft.” (Like playing with wolf cubs, perhaps?) But when the scores were tallied, the “slight bitter note” that Baker had detected seems to have worked in context — and context, you will see later, is often all.

The observant reader may now have noticed that none of the classic oyster wines have yet made it into the running. More on that later as well. But among the two wines tying for fifth place, one does finally appear: the 2006 Chateau Goudichaud Graves de Vayre — no, not that Graves. Considered a “lesser appellation” by The Wine Bible’s Karen MacNeil, these wines, in her words, “can be quite decent `though` many are uninspired.” We weren’t inspired, but we did find some things to like. “A beautiful nose with citrus and grapefruit … delicate,” deemed Martin. “Apples and a fall cornucopia,” waxed Wolff. Omniboire detected both citrus and peach.

Though from a completely different region, some of us also found peach in the ’06 Italo Cescon Friuli Grave Pinot Grigio. Creaminess was another agreed-upon quality, though one taster, who shall remain nameless, thought the wine might be an Albariño, suggesting that the Friuli is capable of producing pinot grigios much different from (and more rewarding than) the ubiquitous Santa Margherita. It should be noted here that the artsy-craftsy packaging of the Cescon was not appreciated by all. (“It makes me suspicious,” said Wolff.) But Omniboire actually (though reluctantly) admits to liking the little bit of grapevine bound to the bottle with yellow ribbon, and there’s a great, nostalgic story on the back label. You can’t miss the bottle in any case.

The last wine to make the 13/20 cutoff was the one normally most associated with oysters, a Muscadet, this one a 2005 sur lie from Le Perd-son-Pain. “It has a peach-fuzziness,” suggested Martin. “Lemon cake,” proclaimed Wolff. “It hints of this, hints of that … ” offered Baker. Omniboire agreed with the peach comment — perhaps without the fuzz, and also found tarragon. This label also came in for some knocks. “It looks like a $5.99 wine,” sniffed Baker who is, after all, in the retail wine business.

At last, the oysters. Two wines that didn’t make the cut on quality alone fared much better when matched with mollusks. (For the record, Sandbar chef Chris Spencer opened Bagaduce, Caraquette, Indian Point, Island Creek, Malpeque, Pemaquid, St. Simon and Summerside oysters.) Especially vindicated by context was the ’05 Michel Redde le Tuilleries Sancerre; it tied for number one in OFQ (oyster-friendliness quotient). Omniboire had found both mineral and lime (good) and funk and scallion (not so good) when tasting solo, but agreed that it worked very well with the briny (some more so than others) oysters.

Yet quality will out as well: The number-one sauvignon blanc from Craggy Range tied for first with the Sancerre, and the number-two kiwi wine, Koura Bay, tied for second with the classic, but initially low-ranked, Le Perd-son-Pain Muscadet. The two pinot grigios from Friuli also fared well, as did the albariño. The unranked ’05 Paul Cantin Pouilly Fumé, and the white Bordeaux from Chateau Goudichaud trailed the pack. If there’s any conclusion at all to be drawn from this it’s that both neutral and assertive wines can work well with oysters — just avoid anything with low acid or any sweetness. And, of course, if you’re replaying this game at Sandbar, the wine list spells it all out for you. But what’s the fun in that? •

Exceptional, snap it up 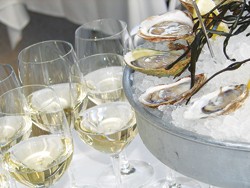 Extremely good, seek it out

Most wines can be found at Central Market,
Saglimbeni Fine Wines and other specialty wine shops