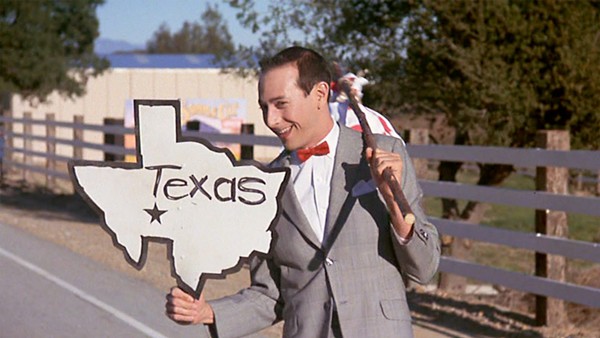 Warner Bros.
It's a sad day for Pee-wee Herman fans in San Antonio.

Paul Reubens, better known for her wacky persona Pee-wee, took to Facebook Wednesday to let fans know that he won't be at this year's Alamo City Comic Con.
Reubens was scheduled to appear at the annual pop-culture fest, set for October 26-28 at the Alamodome. Though he expressed his disappointment in having to cancel and shared his love for Texas and his fans, he didn't give a reason for the sudden cancellation.

He apologized to fans, especially those who paid big bucks for the meet-and-greet option.

Pee-wee's love for San Antonio goes back more than 30 when his 1985 film Pee-wee's Big Adventure had a brief stint in the Alamo City. He famously asked about the basement in the Alamo (it turns out there's two) and also said, "I remember ... the Alamo," which delighted the Texans in the film.
Get our top picks for the best events in San Antonio every Thursday morning. Sign up for our Events Newsletter.
Scroll to read more Arts Stories & Interviews articles
Join the San Antonio Current Press Club