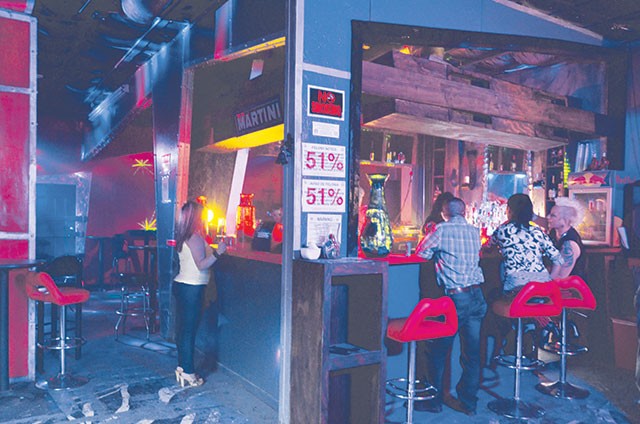 Perhaps I was feeling melancholy about the impending series finale of HBO’s smutty vampire soap opera a few Sundays ago, but the scene at San Pedro’s Wax Club Lounge was a bit too reminiscent of True Blood’s Fangtasia.

Bear with me a minute—the bar’s edifice isn’t much to look at (and they could use a sign pointing to which door to enter, or maybe I’m daft), but much like Fangtasia, the bar comes to life once you step inside. Again, much like the vamp-hang, Wax Club Lounge features a VIP area to the right of the entrance (complete with stripper pole!), raised several feet for a nice view of the dance floor and DJ. Dark walls give way to crimson red and Gothic touches, such as the gargoyle-esque light fixtures that dot the area along the wall by the lone pool table. A handful of stools with red lips that double as seat cushions are both cheeky and really comfortable-looking. Wax Club Lounge is, after all, a perennial favorite in our Best of San Antonio readers’ poll for best Lesbian bar.

The crowd—mostly laid back with a handful of ne’er-do-wells—stayed around the bar area where two ’tenders, professional and proficient in making the joint’s signature ’tinis, held court. Drinks are moderately priced, and there’s a bit for everyone. There’s bottled cervezas available in a wee fridge, but you’re here to dance and imbibe mixed drinks. Depending on how rowdy you may or may not want to get on any given evening, or how many feelings you’re trying to erase, you can either stick with the mixed drinks (I ordered a plenty suitable margarita and rum and Coke to start), but can I recommend an Adios Motherfucker? The order for this ubiquitous drink came toward the end of the night after spying the bartenders whip up several of the ice blue beverages for other patrons. Made with gin, light rum, tequila, vodka and Blue Curaçao, the Adios Motherfucker earns its moniker. The bartender laughed at me as she handed over the concoction and said, “Good night, sweetie.” Had I enjoyed another, I might have been up for some industrial thrashing on the dance floor.

I happened on Wax Club Lounge during its preview night of Industrial Fest. The kickoff included DJs Draggy, Infekktion and Dante’s Prayer who spun abrasive experimental sounds throughout the evening, but don’t ask me to name off songs played. Still, while I’m not a complete fan of the genre, I didn’t find the jams entirely off-putting either. Had I known it was industrial music night, I may have opted for darker hues and more zippers, though no one seemed to mind my coral bermuda shorts, gray V-neck and sparkly chanclas. But I wasn’t the minority as other bar-goers donned casual wear for the most part. (Although I’m still dying to know where a particular patron purchased her black vinyl coffin backpack—very cute.)

Industrial fans trickled in and some brave ones took residence on the dance floor, while other patrons enjoyed a quick pool game. There’s a patio out back for the smoking set and a smattering of tall bar tables where small groups congregated. My party and I left just a few minutes before midnight as the night was really starting to come together for Wax Club Lounge. If you’re a) willing to deal with a teensy parking lot, b) dying to order a few Adios Motherfuckers and c) needing to get your dance on without any sort of judgment, you could do a lot worse than this neighborhood haunt.