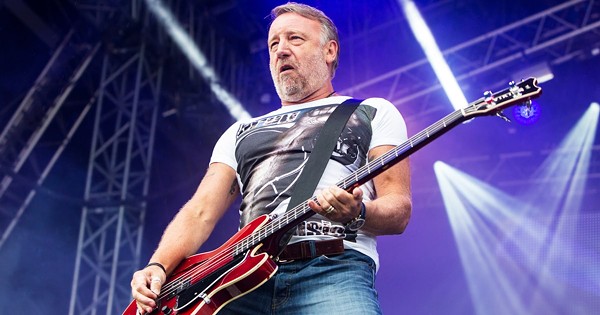 Courtesy of Sonic PR
Only a handful of musicians get to perform in a band that helps mint a genre. Peter Hook can claim to have done it twice.

As bassist in Joy Division, he shaped the dark and angular sound of post-punk. And, while holding down the same role in New Order, he brought an irresistible pulse to new wave and participated in the birth of electronic dance music. Now, as leader of Peter Hook and the Light, the bassist-producer-writer-educator is paying homage to those two iconic bands.

The Light’s tour, which stops next week at S.A.’s Paper Tiger, will perform both Joy Division’s Substance and New Order’s LP of the same name in their entirety. Both albums are compilations of the respective bands’ career highlights. We caught up with Hook on the road while he had a 3 p.m. cup of Joe in his hotel room. He offered the lowdown on his varied career, why the audience is crucial and why teens in black still can’t get enough of Joy Division.

You have a distinctive bass sound in that you tend to play on the high strings and use it more like a lead instrument. How did that evolve?
I suppose it has something to do with my ego… No, when I started, I was very reluctant to go down and sort of play the root note when the guitarist, shall we say, suggested it. So, I’ve never been into that cliché of the bass player sitting back. That’s really not my style. When I looked at the bass players I loved… John Entwistle (of The Who), Paul Simonon (of the Clash) — for his attitude, not so much his playing — and Jean-Jacques Brunel (of the Stranglers) — for his playing and attitude — they were the people I wanted to emulate, not at all plodders, so to speak. And I was also helped along by the fact that my gear was shit in the early days, and it sounded awful when I played low. The only time it made any decent noise was when you played on the high strings. (Joy Division singer) Ian Curtis loved me playing on the high strings, and every time we’d practice he’d encourage it. “Can you play the high strings? Play high! Play high!” It just came from there really. The best thing we can all hope for is encouragement from people we admire, isn’t it?

You were involved in the launch of the University of Central Lancashire’s music production program. How did that come about and are you still involved?
I’m a mentor. The students come and work with the Light. They work with the Hacienda Classical, which is my other big project. They also work at my club in Manchester, which is FAC251. The reason I got involved was that people who are taught music usually don’t get much hands-on musical expertise — it’s difficult to get. If you’re learning to be a manager, or learning to be a roadie, people don’t want you around if you’re just learning. They’re afraid you’ll fuck it up for them. Myself and the person who runs the course agreed that students need a way to get that experience. So instead of learning how to deal with a drunken drug dealer in your club at midnight, we shove ‘em in our club, and if there’s a drunken drug dealer, we send ‘em over. (Laughs.) Experience is worth its weight in gold, isn’t it? But the kids actually come along and work for Peter Hook and the Light, and they do the jobs they’re learning about. They learn how to promote. They’re running an event. They’re running the backstage. They’re doing all the unquantifiable things people need to do to make a concert work. That way, when they sit down for a job interview and someone says, “Well, this learning’s alright, but what about your experience?” they’ll be able to say, “I’ve got experience in this, this, this and this.”

Julien Lachaussee
This tour, your set is comprised of half Joy Division songs and half New Order songs, music that’s decades old now. Does it feel validating to know the songs have this kind of staying power with audiences?
It’s obvious that if I wrote it, I’m going to think highly of it. But the important, crucial factor is that there’s other people in the audience who feel highly enough of it to come and see me. (Laughs.) And hopefully pay me something to see it. Without an audience, I’d be absolutely nothing. My objective, if you like, is to play every song ever written by Joy Division and New Order. We’ve done that with Joy Division — actually played them all in one go on the anniversary of Ian’s death. And now I’m working my way through the New Order catalog chronologically. New Order’s Substance was the best-selling album in America. It sold 3 million as a double vinyl in ’85-’86. We play that first and then segue into Substance by Joy Division. So, you’ve got two very interesting halfs — LPs in form, not setlists. We’re not pretending to be the groups that put out those albums. We are playing a celebration of those albums, which I’m finding that people are fond of. When they hear the album, they get to live through when they first heard it, when they met their wives or girlfriends, when they first went clubbing, when they had their first drug experience, when they had their midlife crisis. You know, people’s lives are chronicled through records, and we’re celebrating the records.

Some critics might hear that and accuse you of being a nostalgia act. Does that bother you?
I couldn’t give a shit. (Laughs.) The very use of the word “critic” indicates they’re going to be negative. I mean, a critic could dissect your job and say, “What do you do but sit around and write about a bunch of old ass-beans all day?” It’s easy to be critical, isn’t it? But, ultimately, it’s the people who decide whether you’re doing it with heart and soul, whether they enjoy it and whether it’s valid.

As you tour with the Light, are you seeing a new generation of people appreciating the music?
The weirdest gig we did was Mexico City. Mexico can be a bit sketchy, so we didn’t know where we were playing or what size venue it was or anything like that, but when we got there, there were 5,000 — well, actually, there were 4,995 — people, and the average age was about 23. And I was absolutely blown away, I really was, that the interest in Joy Division was that strong and that young. It was fantastic. One of the great compliments you get paid is when people come to see you and they bring along their children. They say, “Oh, Johnny grew up on Joy Division and New Order,” and the kid’s there up front with a Joy Division t-shirt on. Actually, to me, the best compliment in the world was to have my son play with me, as he did before Billy Corgan poached him. The fact that he loves Joy Division’s music and he loves New Order’s music, and yet he was born 20 years after, is a great compliment. It wasn’t because of who his dad is, it was because it’s great music.

Do you think Joy Division holds up for a new generation of fans because the feelings those songs embody are so universal, no matter when you grow up as a teenager?
Absolutely. Ian’s confusion and his mental state were exacerbated by his illness. Basically, he was a teenager. He was just 20 when we wrote Unknown Pleasures. He was a confused, mixed-up kid, and confused, mixed-up kids — me included — tune into that. They still do. If you look at a hugely popular program on American TV, 13 Reasons Why, they play Ian’s music all the time, because it’s quite a dark series and the issues in it are quite serious. But the fact that the music still resonates with the producers and sets the scene and the atmosphere — no pun intended — is a great compliment to all the musicians in Joy Division.