Petition Calls For Southwest Airlines To Cut Ties With SeaWorld 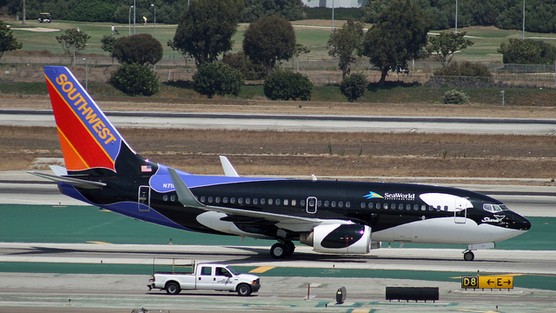 If you saw Blackfish, you most likely had one of two reactions. Either you felt an inconsolable sadness for all the majestic sea pandas held in captive in SeaWorld’s parks, or you wished that the Jaws-ripoff Orca, about a killer whale exacting its revenge, was real, and that Shamu and friends would rise up to terrorize their captors.

The 2013 documentary profiles SeaWorld’s cruel treatment of their killer whales, particularly the harrowing captivity of Tilikum. The male orca’s aggressive response to his confinement led to the death of three people, including seasoned trainer Dawn Brancheau in 2010. The film has been a bane for the marine park operator, with SeaWorld put on the defensive amidst an ever-growing outcry.

Now, in absence of pulling off an effective Free Willy, animal rights activists are setting their sites on SeaWorld’s bottom line. A petition on change.org is demanding Dallas-based Southwest Airlines to end their 25-year partnership with SeaWorld. For years, the airline has offered exclusive deals and promotions to passengers who visit one of SeaWorld’s 11 parks. Organizers plan to present 27,000 signatures to the airline at a planned protest at Dallas Love Field on Wednesday.

“Southwest Airlines has the power and the ethical responsibility to help prevent animal cruelty by ending this dangerous partnership with SeaWorld,” said Alexandria Beck, a petition signer and protest organizer.

A number of musical acts, including Willie Nelson, Barenaked Ladies and Heart, pulled out of SeaWorld's Bands, Brews and BBQ concert series in response to a previous change.org petition, prompting SeaWorld to take out ads in newspapers across the country, including the San Antonio Express-News, lambasting the film that is causing it so much trouble.

Organizers are about 7,000 signatures short of their Wednesday goal. Blackfish is currently streaming on Netflix.