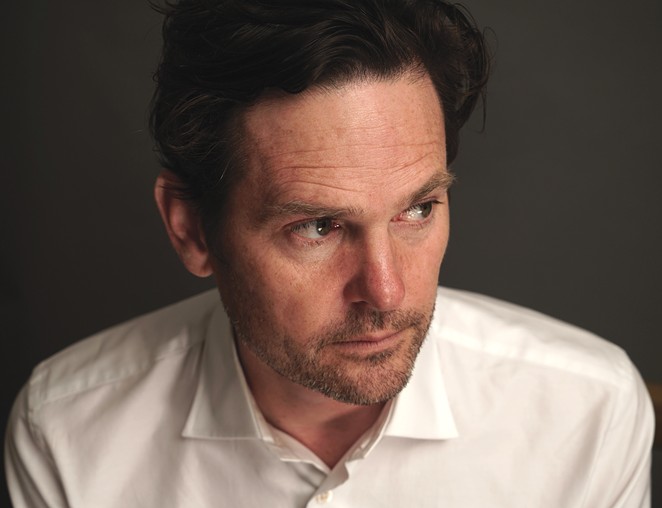 Rare Bird Books
Most people know who Henry Thomas is even if they don’t immediately recognize the name.

Back in 1982, the San Antonio-born actor won over movie audiences as Elliott in Steven Spielberg’s E.T. More recently, filmmaker Mike Flanagan brought him back to the spotlight with the Netflix series The Haunting of Hill House. Longtime Flanagan fans will also have also spotted Thomas in the director’s Gerald’s Game and Ouija: Origin of Evil.

Following the recent success of The Haunting of Hill House, Thomas is also making his literary debut. His fantasy novel The Window and the Mirror, released through Los Angeles-based publisher Rare Bird Books, will hit bookstores April 30.

Given the recent developments, it seemed like a good time to get on the phone with Thomas and interrogate him on what he’s been up to since harboring a space traveler in his closet all those years ago.

So, whereabout in San Antonio did you grow up?
I grew up outside of San Antonio, sort of in the Elmendorf area. I started keeping an apartment in L.A. off-and-on in my early 20s, leaving San Antonio in my late 20s.

I read that you were in a local band back in the ’90s. What can you tell us about that?
Our band was called the Blue Heelers, like the dog. We were sort of a folk-rock band. We had a bluegrass instrumentation, but we played kind of … folksy tunes, with guitar and fiddle and mandolin and drums and bass. We used to play on the St. Mary’s Strip back in the ’90s and a few other towns in Texas. We had an album. We had a little following. We mostly played at this coffee house called Zoe’s Coffeehouse. That’s kind of where we started out, and that was over off of Broadway, around Alamo Heights.

Do you do much with music nowadays, or nah?
Well, I had another band called Farspeaker that I still play with out in L.A. We recorded an album last year. So, yeah, I still do music, but I’ve given up trying to monetize it in any way. I just kind of do it for fun.

You’ve been working with director Mike Flanagan a lot lately. How did you two meet?
I met Mike at a meeting for the sequel to Ouija. He said that he’d been a fan of my work, and he wanted to work with me on all of his films and projects that he had coming up, [laughs] and I kind of nodded my head and said, “OK, thanks a lot.” I fully expected it to be a … you know, a Hollywood promise. And then he really proved me wrong and cast me in everything, and it’s been a great collaboration. I know this crew really well because we’ve worked together four times now.

You were excellent in … well, all of them. You know, it’s difficult to find a sequel that’s so much better than the original, but you really accomplished that with Ouija: Origin of Evil.
Yeah, I appreciate it. Mike didn’t really want to work in that world unless he could turn it on its head and make it his own.

Well, he made the right choice. Let’s talk about your novel The Window and the Mirror now. Have you always been interested in writing, or is this something new?
click to enlarge

Rare Bird Books
I’ve always been interested in writing, and I’ve always written things. I didn’t really ever think I’d commit to writing a novel. But I wanted to, I wanted to for a long time, and I wanted to write a fantasy story because I was a big fan of the genre. As an actor, when you work, there tends to be a lot of downtime. I decided, when I was working on a job in Romania, that I would use my off-time to do something worthwhile and not just hang out at the hotel bar — have something to show for it at the end. So, I started working on what became this book.

What attracted you about the fantasy genre? What did you grow up reading?
Well, you know, of course the Lord of the Rings trilogy, but also — when I was a kid — C.S. Lewis and The Lion, The Witch and The Wardrobe. Also: Lloyd Alexander and The Chronicles of Prydain. All of these things, plus as I got older Robert Jordan, George R.R. Martin. All of these fantasy worlds that were these huge sprawling world-building platforms. That gave me the idea that this was something I could do and would like to try my hand at.

According to your author bio, you’ve also been a sword instructor. Please explain.
Well, yeah, I was part of a martial arts school for four years in Los Angeles. Some fellow students and I, after we left one school, we started our own chapter together. I was an instructor. We were a non-profit volunteer-based martial arts academy specializing in medieval German swordsmanship.

Seems like the perfect profession for someone writing fantasy.
[Laughs.] Yeah, well, it informed a lot of things in my writing. I was trying to make my sword fight scenes in the book as realistic and plausible as possible.

Did you ever, like, walk around your living room with a sword, trying to map out each scene?
At that point, I was teaching probably four to six hours a week, so I could just envision it in my head pretty easily. [Laughs.]

The subtitle on The Window and the Mirror says, ‘Book One’. Is this a planned ongoing series, or a tight trilogy, or what do you intend on doing with it?
Yeah, it’s going to be at least three books. I have three books outlined. I’ve been working on the second book already, and it’s kind of taking me in a direction I didn’t expect. So, I’m now considering a possibility of four books. But we’ll see at the end of this if there are going to be three or not.

Best of luck to you, man. This is awesome. I’m glad this is coming out.
Thank you so much. I’m excited, myself. I didn’t know it would happen. It was, you know, a few years of being out with publishers before the good people of Rare Bird Books took it on, and it’s just been great. It’s been a dream come true to know that this thing I’ve worked on so long is going to have a possibility of being read by people other than my circle of friends. [Laughs.]