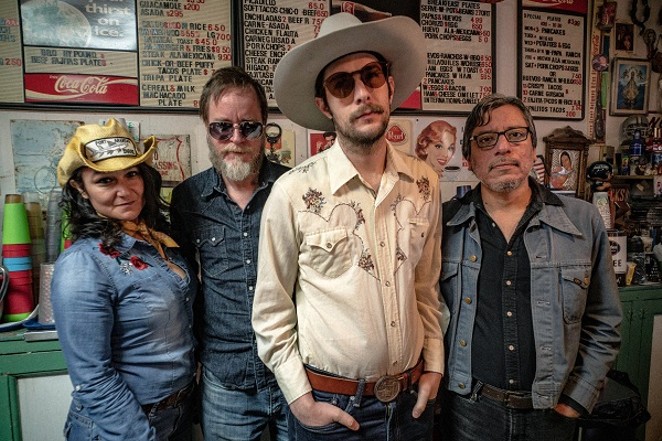 Lloyd Walsh
The Three Timers
It’s Fiesta time in San Antonio, and Garrett T. Capps — our hometown hero of the new-school honky tonk vibe — is dropping a new record with his rock and roll outfit the Three Timers. And, let me tell you, this thing is as messy and easy to love as the Fiesta Sucia.

Titled Sounds of San Antone, the nine-song album is Capps' first release since his attention-grabbing country release In the Shadows (Again), back in May 2018. To be clear though, the Three Timers are a band, and despite the fact that Capps wrote this new batch of songs, this should be viewed more as a band album than anything Capps has put out before.

Capps was eager to say as much when he spoke to the Current over the phone this week. He explained that, in the midst of the publicity surrounding his tune "Born in San Antone" being featured in Showtime's hit series Billions, he was contacted to play honky-tonks like Austin's White Horse Saloon.

"I wanted to put together a bar band, a working band that had the right stuff to play more high-energy shows," he said.

The rest, one might say, is history. Capps joined forces with guitarist Roland De La Cruz, bassist Jeannette Apolinar and drummer Brad Turner to form the Three Timers. And, though they have only been a band for a little more than a year, the outfit has already toured in Europe, rocked countless Texas honky-tonks and become regulars at the White Horse.

Thus, what was originally meant as an entertaining distraction of a band, intending to play mostly covers and fill Capps' time between solo work with his NASA Country crew, has quickly become a garage country/roots rockin' powerhouse performs almost all original material.

"Now the only covers we really play are a Devo song, a Thin Lizzy song, a Doug Sahm song and Buck Owens," Capps said, chuckling.

With these divergent projects, Capps is able to satisfy the full range of his musical/songwriting skills and, at the same time, straddle the two sides of his chosen genre.

Let me explain. Real Texas country music can, so far as I can tell, be divided into two basic categories: the whine of the ol’ train whistle and the chugging of the wheels on the rails. That’s it. If you’re making something that doesn’t sound like (and feel like) one of those two, then you’re either doing it wrong or you ain’t making country music.

If Capps’ current solo work skews more toward the whistle whine, his work with The Three Timers is where his wheels hit the rails.

"Sounds of San Antone" album art
The new album’s immediate standouts are “NY, LA, and Nashville,” a stomping and roaming song about an SA kid looking elsewhere for something that’s been right in his Texas hometown all along; “Love Goner,” an uptempo dirge featuring Josh Baca of Los Texmaniacs on accordion that's about giving up on romance; and “Forgot About Nashville,” a celebration of Texas country artists forgoing Music City to create the music they really want to make.

Also worth noting are a rowdy and extended live version of Capps' biggest hit to date, the aforementioned "Born in San Antone," and a nostalgic almost-slow dance of a track called "Anymore."

Band manager John Strodtman — "Because that's the kind of band we are, we have a manager," Capps said, laughing — aptly describes the sound of the album in its liner notes as "a sloppy set of South Texas roggenroll spillin’ out your ears like an overloaded plate of enchiladas."

Out on April 19, right on cue for Fiesta, Sounds of San Antone is, all-in-all, a barnburner of an album, with a release perfectly timed to a season wherein San Antonians are more than ready to let loose. Listen to "Love Goner" below and check out the Album Release Fiesta at Lonesome Rose this weekend.
The Three Timers Album Release Fiesta feat. Santiago Jimenez Jr. and D.T. Buffkin
$5, 9pm, Fri., April 19, The Lonesome Rose, 2114 N. St. Mary's St., (210) 455-0233, thelonesomerose.com.

14 articles
Get our top picks for the best events in San Antonio every Thursday morning. Sign up for our Events Newsletter.
Scroll to read more Music Stories & Interviews articles
Join the San Antonio Current Press Club