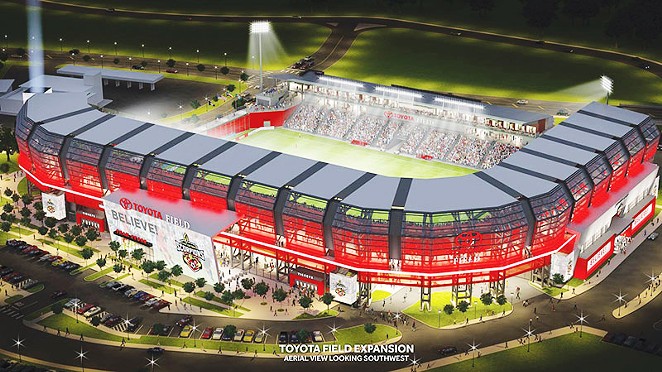 The Bexar County Commissioner’s Court approved a deal after we went to press for the County to jointly purchase Toyota Stadium with the City of San Antonio for $18 million. City Council vote on the Toyota Field purchase. You can read more about what the CIty, County and Spurs Sports Entertainment go next, here.

The original story continues below.

Bringing in a Major League Soccer team has long been a collective San Antonio aspiration. And though it's still a ways off, fans feel that a deal announced last week means the dream is closer than ever.

Here's the plan: The City of San Antonio and Bexar County will purchase Toyota Field from San Antonio Scorpions owner Gordon Hartman for $18 million, with Spurs Sports and Entertainment chipping in another $3 million.

The city and county will then lease the stadium to Spurs Sports and Entertainment for 20 years. The group has six years to procure an MLS team to own and operate, otherwise it must pay the city and county $2.5 million each.

High-level soccer is a good fit for San Antonio's demographics, and would likely draw soccer fans from Central and South Texas. It could strengthen ties to Mexico by bringing over teams from its professional ranks for exhibition games.

"Fans may have to wait a few more years, but soccer has an international appeal and is a perfect fit for our city's global outlook and economic strategy," Mayor Ivy Taylor said in a press conference.

For fans like James Hope, president of the Crocketteers, a San Antonio soccer supporters group, the waiting game is nothing new. Hope's lobbied to bring MLS to San Antonio for over a decade.

"Our goal has been to bring the highest level of professional soccer to San Antonio," Hope said. "It's a dream come true for those of us who have been working on this."

But Hope also realizes there's still a long way to go before the MLS officially comes to town, with no definite timeframe of when that might happen.

MLS will likely add franchises in Miami, the Minneapolis/St. Paul area, Los Angeles and Atlanta by the end of the decade, bringing its total number of teams to 24. But it won't stop there, according to Don Garber, the league's commissioner.

"We've got to come together and develop a plan with our ownership to determine when we go further, because we will," Garber said to reporters in April. "We will expand this league beyond 24 teams. It's not an if, it's a when."

New clubs must pay an entrance fee of $100 million – a figure that could increase by the time the league is ready to grow again. And the new ownership group must assuage any doubts about San Antonio's lackluster television market and median household income.

Hope is optimistic that if any group could do that though, it's the one that's molded the Spurs into a model franchise for all of professional sports.

"Nobody can doubt the abilities of Spurs Sports and Entertainment to put on a successful program," Hope said.

San Antonio has another advantage few other cities can boast: a soccer-specific stadium that's already in place. MLS officials have stressed that they prefer cities with arenas built solely for the beautiful game.

But Toyota Field, which currently seats about 8,000 people, would need some adjustments. Making the necessary upgrades for an MLS-caliber facility – including installing about 10,000 more seats, building luxury boxes and upgrading other infrastructure – could cost $45 million. That could be covered by some combination of public and private funds.

In the meantime, it's unclear what will happen to the city's current professional soccer team, the San Antonio Scorpions. Spurs Sports and Entertainment will field a team in the third-tier United Soccer League. That leaves the Scorpions, which play in the second-tier North American Soccer League, in limbo.

Hartman donates all the revenue from the team to support the special needs community. He said in a statement he'd ensure that any future club supported the same interest.

"Soccer for a Cause began four and a half years ago to bring focus and assistance to the special needs community while also delivering high-quality professional soccer. We look forward to reviewing the final details of the agreement ... to ensure that it continues to advance those dreams," Hartman said.

While Hope and other supporters are appreciative of Hartman's efforts, their main concern now is sprinting toward the big bright lights of MLS.

"Without Gordon Hartman there would be no chance for MLS in San Antonio," Hope said. "We want to make sure that the Spurs are ready to make the next step. We don't want to see minor league soccer in San Antonio anymore, we want to see Major League Soccer."

San Antonio isn't the only city pushing for an MLS franchise. Here are some other possible big-league soccer cities:

St. Louis // The Gateway City has long sought an MLS team, but has lacked the infrastructure for one. A new stadium designed to keep the NFL's St. Louis Rams in town could accommodate a soccer team as well.

Austin // Our neighbors to the north are currently home to the Austin Aztex, a minor league club. But MLS Commissioner Don Garber has listed Austin as a possible destination for expansion.