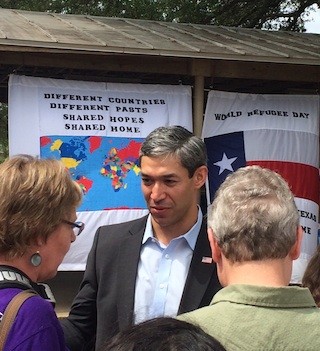 U.S. officials are in the process of identifying additional properties around the country that can be used to temporarily house the tens of thousands of unaccompanied children now fleeing their violent, impoverished homelands in Central America to seek refuge in the United States.

Initially, three military bases in Texas, California and Oklahoma were enlisted for the cause, including Joint Base San Antonio-Lackland, which is housing some 1,200 migrant children, many under the age of 13. Most of them crossed the U.S. border alone and with little more than the clothes on their backs.

But it is clear the housing set aside for the children at those three military bases—up to 3,000 beds in total—is not adequate to handle the continuing surge of unaccompanied children entering the country.

Consequently, Kenneth Wolfe, a spokesman for the U.S. Department of Health and Human Services, confirms that U.S. officials are in the process of “evaluating” additional facilities that could be used to provide temporary housing for these children. That is a major bit of news, given that to date, federal officials handling the unaccompanied-children crisis have not indicated officially that more temporary housing facilities—beyond the three military facilities now in place—will be needed or are in the process of being set up.

“Organizations, communities and states have offered to help with this humanitarian response and the [federal] Unified Coordination Group [which includes HHS and the Department of Homeland Security] is also evaluating facilities proposed by state and local partners,” Wolfe said. “While only a few facilities will ultimately be selected, a wide range of facilities are being identified and evaluated to determine if they may feasibly provide temporary shelter space for children. Facilities will be announced when they are identified as viable options.”

Among the local players interested in providing assistance to the unaccompanied children is Catholic Charities of the Archdiocese of San Antonio Inc., which already operates numerous programs serving the estimated 700 or more United Nations-identified refugees resettled in San Antonio each year in coordination with the Department of State and HHS.

City Councilman Ron Nirenberg, who represents District 8 on the city’s Northwest Side, where many of the refugees resettled by the Department of State now live, confirms officials with Catholic Charities have approached him asking for city staff’s help in identifying properties in San Antonio that might serve as temporary shelter spaces.

Nirenberg could not say how many children might be housed at such a site, but he did say the size of the leased spaces of interest to Catholic Charities is “significant”—in the 20,000- to 40,000-square-foot range. Given the building at JBSA-Lackland now housing some 1,200 unaccompanied children is about 200,000 square feet, a rough estimate of the number of children a 40,000-square foot-space might hold would be 200 to 300—possibly more.

Niernberg stressed that this would not be a City project, but rather involve a contract between the service provider, in this case Catholic Charities, and the federal government, if space is ultimately leased for a temporary shelter. He says the process is still very much in the preliminary stages and any final deal, if inked, would have to be vetted and approved by federal officials, likely with HHS.

“This is a federal issue but it has state and local ramifications, so it’s incumbent on our city to help figure out how to deal with it in a humane way,” Nirenberg said. “These are kids in our community and they need our help, and we have a moral obligation to deal with this issue and help address the need until a permanent solution is found.”

Patty Vela, the director of mission advancement for Catholic Charities in San Antonio, said her organization “is aware and concerned about the influx of unaccompanied minors.” However, Vela added that she could not comment at this time on any specific plans the nonprofit agency may be pursuing to provide services or shelter to the unaccompanied children.

“Our CEO/President is engaging in active dialogue with directors for the agency, with our Immigration and Refugee

Services program and equally is receiving feedback from the Development department, [which] is currently conducting research about the situation,” Vela said. “We stand ready to provide whatever help needed within the scope of program services.”

Private-sector agencies such as Catholic Charities have the capability to provide both shelter and social services to the unaccompanied children, making them attractive potential contract partners for the federal government. In the case of JBSA-Lackland, although the facility is being provided by the Department of Defense, another locally based nonprofit social-service agency, BCFS Health and Human Services, is actually operating the facility under contract with the federal government.

Buildings controlled by the Department of Defense and the U.S. General Services Administration, which manages federal properties around the nation, also will continue to be used as sites for temporary shelters for unaccompanied children, Wolfe confirmed.

Facilities are being identified by the U.S. Department of Defense and U.S. General Services Administration as potential locations to increase the medical care and temporary sheltering capacity of HHS,” said Wolfe, who is the deputy director of public affairs for HHS’ Administration for Children and Families.

Over the first eight months of fiscal 2014, ending May 31, U.S. Customs and Border Protection [CBP] reported that 47,017 unaccompanied children, most from Central America, had entered the country through its Southwest border. As of June 15, that number had jumped to 52,193 — a 5,176 increase in just two weeks and up 99 percent over the same period in fiscal 2013. By the end of this fiscal year on Sept 30, CBP is projecting that more than 90,000 unaccompanied kids will have entered the United States, creating a major bottleneck in the U.S. immigration system.

The children are apprehended at the border by CBP, which is part the Department of Homeland Security. By law, DHS can hold the children no longer than 72 hours prior to turning them over to HHS, which places them in a group-home setting that offers expert medical treatment, nutrition, mental health and education services.

But that is where the U.S. immigration system is breaking down. The unaccompanied children, arguably the most vulnerable of all undocumented immigrants, are now regularly being warehoused for far longer than 72 hours in CBP holding cells that aren’t designed for children.

The Federal Emergency Management Administration [FEMA], a federal disaster-planning agency that is part of DHS, has been put in charge of coordinating the federal effort to address the housing shortage as well as other problems related to the surge in unaccompanied children, which White House Domestic Policy Director Cecilia Muñoz characterizes as a “humanitarian” crisis.

[so] no child will be in detention, or a holding cells, for more than that 72-hour period,” W. Craig Fugate, administrator of FEMA, said during the media conference call earlier this month. “

As it is now, we are backing up into facilities that were never designed for children.”