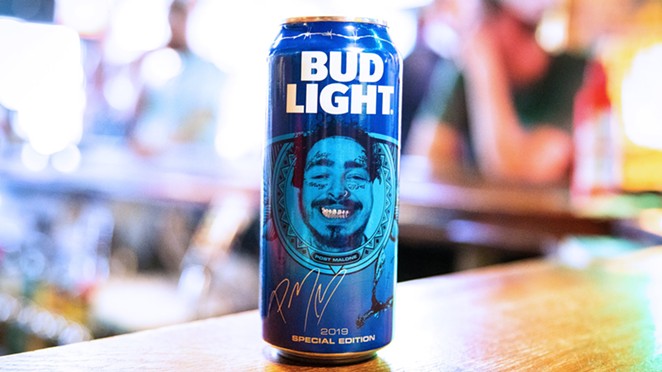 Twitter / budlight
Have you ever wanted a drinking buddy, but your friends are busy or bail on plans? Want no longer – the new limited edition Bud Light cans – featuring the face of Bud Light enthusiast Post Malone – are here to keep you company.

After hosting the tatted warbler during their Bud Light Dive Bar Tour series and collaborating on a limited merch line, the beer company decided to again partner with its long running, unintentional sponsor in an effort to expand on its ongoing creative can design releases.

Bud Light's latest version of their iconic blue cans, which now don a grinning, grill-clad Posty, have been spotted at select San Antonio H-E-B locations as reported by fans on Twitter. The surprise arrival coincides with the multi-genre artist’s current Runaway Tour, which includes a stop in San Antonio in October.

As of press time, H-E-B’s website doesn’t show any listings for the cans, but a Twitter thread was created by the singer’s father in order to help fans track down and purchase a few “sudsy ones” in their area.

So far, locals have reported sightings at the H-E-Bs at 410 and Bandera and 2130 Culebra Road.


If you're not enough of a die hard fan to trek all the way to one of these stores, hopefully hope the Bud Light Knight brought a hefty supply of Sir Post’s face to the shelves at your closest H-E-B.