‘Post Penis’ at Blue Star: Is there art after sex? 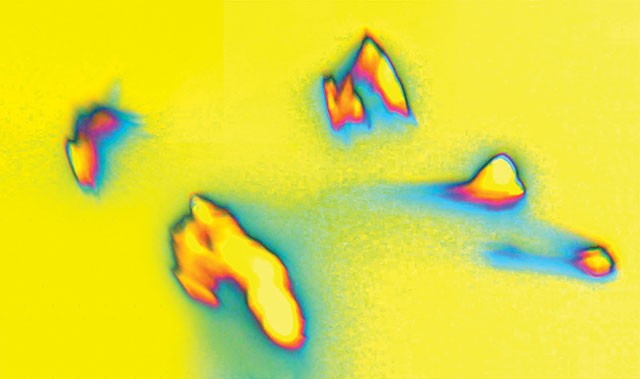 There’s a photograph of Paul Rodriguez as part of the wall-text package. He appears young, handsome, bearded and thoughtful. His face is banded and speckled by rays of colored light, as though his image has been captured facing his multichannel video installation, which is lush with color, ambitious in scale, seemingly agenda-less and very seductive.

The front and left-side wall of the space, as you go in, act as full-wall screens for two different looped projections. On the left, titled Fail 2, is a 43-second loop of clips, most apparently filtered or otherwise color-manipulated through editing software into a shifting disjunction; a now-yellow, now-blue-and-pink surfer forever crests a golden-then-rosy wave; a rear-view video of a blue person’s cervical spine and the base of her/his skull lights up in fuchsia glow, chakra-like; flashing lights and liquid forms flash, bleed and gush.

On the center wall, entitled Everest, a three-channel set of one-minute loops presents a slightly more linear group of images. Among them are the artist himself, gazing at the viewer in slight consternation (the artist photo may be a still from this clip), maybe on a dance floor; a woman executing a flamenco-like dance gesture in the same club, maybe; static video shots of a geranium; other lush foliage; gentle waves breaking; and a neon image of a bear paw. On the wall to the right, a rectangular canvas freckled with blue is framed by turquoise neon.

This is all framed by a musical soundtrack, too; the artist has interwoven various themes, including a tinkly, female-voiced ’80s love ballad, sorrowful hip-hop refrains, a tripped-out rendition of “Hurdy Gurdy Man,” so that Rodriguez has crafted a full-tilt video and DJ experience.

The exhibition title, “Post Penis,” is a puzzle, calling forth a notion that Rodriguez’s installation occupies a conceptual “liminal space” (i.e., threshold between the known and unknown) that occurs beyond or after, well, penis. Does he mean this work eschews a male-dominated or “phallocentric” set of symbols? His wall text stipulates that “Men want men. Women want men so they can have children,” which may or may not be a wink at queer theory, feminism, gender binary, or even a baldly stated opinion on the state of natural desire. But at any rate, it hardly disengages penis. He also states that “‘Post Penis’ is an installation consisting of video, light and sound. Not community or country based. No condom contracts.”

For those who bristle at coy riddles and a deflection of meaning, “Post Penis” provides a lot of gristle to chew on, if you try to parse it. But if you choose to ignore or disregard the ego demands, however playful, of the text element and surrender to the sensual pleasures, “Post Penis” feels fluid and lovely and completely inoffensive.