Potential Is There For Pinks Patio

Opening a bar in December is a gamble — even more so if that bar happens to be 60 percent patio. But that's what the owners of Pinks Patio have to work with. The former bus station and solar panel depot has definitely come a long way from its former digs, and will continue growing into the next lot over, but until then, the weekends seem to be the time to visit Pinks.

Here's how our visit turned out.

The Booze: If you're not about that craft life, you'll feel right at home at Pinks. The joint carries six beers on draft, only two of which are from Texas — Shiner and St. Arnold. Otherwise, you'll find your share of big labels — Dos Equis, Bud, Lone Star, Corona Extra to name a few. Wine drinkers have their pick of nine bottles of vino. Come weekends, Pinks carries micheladas and sangria for your Sunday Funday.

The Ambience: To be fair, Pinks (named after a bespectacled anthropomorphic buck) only opens four days a week, and the weather has been spotty. We were the only patrons there from the bar's opening to about 7 p.m. when we left. It's a shame because the bar has a cute wine lounge adjacent to the main room, clean patio tables, a stage for music and plenty of seating inside the main bar. Though Pinks is technically a food truck park and bar, it'll make for fun Spurs game viewing come playoffs with the joint's several flat screens and great sound system.

Sounds: The Sons of Bitches played the patio when Pinks opened in mid-December, but live music has been put on hold during the early winter months. It'll return Valentine's Day weekend with acts focused on rock and pop, according to Pink's owner. In the meantime, a DJ sets up with Top 40 hits.

Bites: Trucks rotate regularly. During our visit, we noshed on a simple caprese salad with mozzarella and balsamic-doused grape tomatoes from the Luiggi Food Truck. The quesadilla with steak also came with the salted, halved grape tomatoes and balsamic that quickly turned my tortilla soggy, which was a bummer. Tacos Mando was also available with mini tacos and the like.

Patio: Much like The Pigpen, Pinks Patio sits on a bourgeoning corridor, so it stands to reason that once the weather heats up (and I'm writing this as we're about to hit a mid-70s high for the day), the bar will cater to more people. It's pet-friendly and spacious, with more room to grow on and plenty of bike parking. The opening of apartments down the way mean that Pinks will have an audience, but it'll have to capitalize on great food trucks to differentiate itself from other neighboring patio bars, including Stay Golden Social House, which serves cocktails, GS 1221, with its massive lineup of craft beer and upcoming Down on Grayson, which will also feature a sprawling patio whenever it opens. 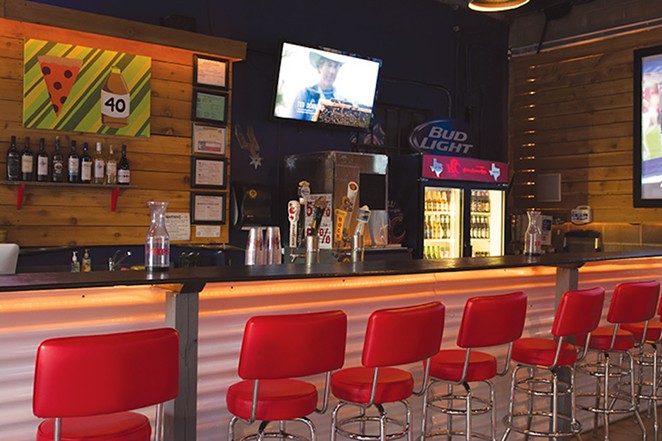 Pinks needs a few tweaks and maybe a legitimate happy hour to help get more butts in seats, but otherwise, the bar has a solid foundation as a chill, laid-back watering hole that'll make for prime Fiesta partying come April.