Remembering the Year the Music Died 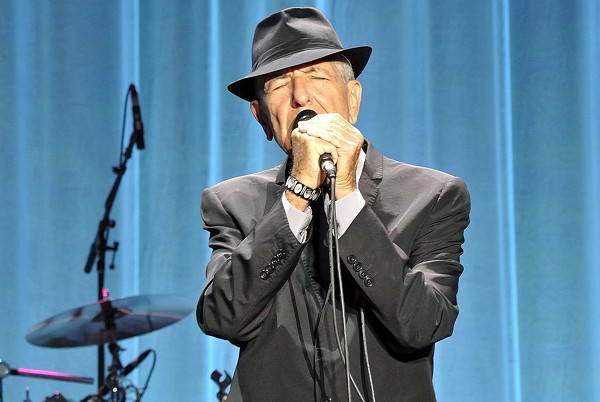 Leonard Cohen was a living and breathing Zen koan, perhaps finally articulated in two of his last statements about his own mortality: “I am ready to die” and “I plan to live forever.”

This duality in the face of death seems to symbolize the devastating nuances of Cohen’s poetry and lyrics. The Canadian poet and ordained Buddhist monk never held any designs on being revered as a musical mind, though he certainly entered some truly great songs into the eternal ledger, but he saw the performance of popular song as an elegant and accessible way to impart the written word to groups of people. With songs like “Hallelujah” (though his original version is largely eschewed), “Chelsea Hotel No. 2,” “Bird On The Wire,” “So Long, Marianne,” “Suzanne,” and several others over the years, Cohen presented a unique creative vision of the world, somehow both pessimistic and mystical at once, and teeming with wounding and exasperating images of truth, death and love.

Not as prolific as some of his contemporaries, at least in musical output, Cohen’s offerings, even his more recent efforts, always had the studied and self-sure air of projects that had been appropriately suffered for. — JC

Leon Russell was basically an ace blues tickler and an occasionally powerful songwriter, who fell head first into some good acid, couldn’t decide between the Brits and the cowboy-hippies, and could lay it on thick in just about any style you could dream up.

He was a hustler and a stubborn star’s star, a unicorn born into pastures of longhorns and wild mustangs. He could mingle, but he could never stray too far outside of his own glorious strangeness. He played keyboard with artists as disparate and estimable as Elton John, Neil Young, The Rolling Stones, The Beach Boys, B.B. King, and Barbra Streisand, just to name a few.

But it would be a shame if, in recognizing Russell’s legacy as one of the most talented musicians of his time, we were to neglect the trove of strange beauty and sheer individuality that is his own musical output. Carney, Russell’s gritty and wild, pop-rock masterpiece from 1972, is one of the finest albums of the 1970s (to say the least), and an absolutely essential listen for anyone looking to dive into the man’s work. Another personal favorite, with a loose and boozy country wink, is 1973’s Hank Wilson’s Back, Vol. 1.  — JC

Unlike the untimely departures of Bowie and Prince, the passing of funk and soul powerhouse Sharon Jones came with a public warning via filmmaker Barbara Kopple’s documentary Miss Sharon Jones! Three years in the making, the film shed an intimate light on Jones as she fought pancreatic cancer with an inspiring level of determination and positivity.

Born in Georgia and raised in 1960s-era New York, Sharon Jones grew up idolizing James Brown, singing gospel in church and eventually gigging with wedding bands. Demonstrating a toughness and tenacity later reflected in her music, she supported herself by working as an armed guard for Wells Fargo and a corrections officer on Rikers Island. Eluded by success despite undeniable talent and star quality, Jones was once told by a record producer that she was “too fat, too black, too short and too old.”

In 1996, Jones’ big break arrived in the form of producer/bandleader Gabriel Roth, who “discovered” her singing backup for fellow James Brown disciple Lee Fields. She ultimately released her debut song “Damn It’s Hot” at the age of 40. Personifying the concept of a “second chapter,” Jones went on to spearhead New York’s retro soul revival as frontwoman for Roth’s horn-driven ensemble the Dap-Kings. Adding an electrifying draw to the band’s success was Jones’ inimitable stage presence — a tour de force shouting and shimmying in sequins and fringe. Inevitably, critics and fans likened Jones to a “female James Brown.”

Chronicled in Kopple’s film, Jones did make a triumphant, albeit brief, recovery (“I have cancer; cancer don’t have me,” she told Rolling Stone in 2016), defiantly performing with a close-cropped cut and earning a much-deserved Grammy nomination for 2014’s Give the People What They Want, a sixth album she wasn’t sure she’d live to see released. Currently displayed on record store shelves, Sharon Jones and the Dap-Kings’ final offering — 2015’s It’s a Holiday Soul Party — listens like a poignant farewell, with the late singer lamenting on Charles Brown’s 1960 classic “Please Come Home for Christmas” — “Oh, what a Christmas to have the blues.” — Bryan Rindfuss