Rent Hike Is Forcing Press Coffee to Close this Month 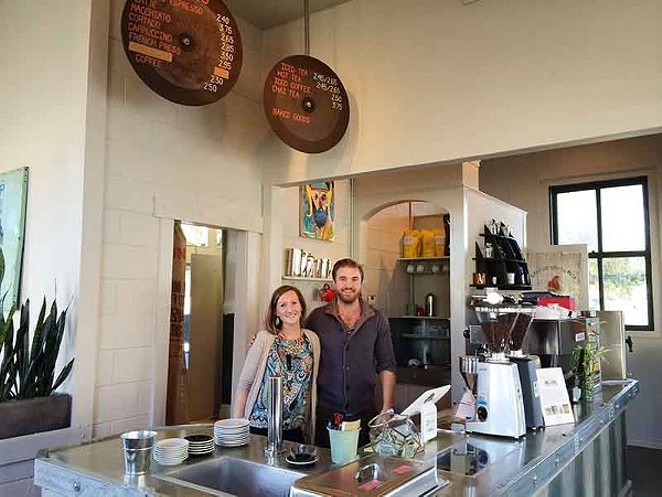 Small businesses are integral to small neighborhoods. For the Alta Vista 'hood, Press Coffee, one of the area's recent early adopters, is closing its doors. Press announced its shuttering on Wednesday evening in a Facebook post, and noted "an exorbitant rent increase" as the reason for the move.
The news comes after a change.org petition was launched on October 2, urging landlord Barbara Owsley Lamar to "Save Press Coffee." The petition, started by Press customer Robert Maycotte cites the coffeeshop's activation of the neighborhood, and ends with, "By signing this petition we want to not only show Press Coffee our gratitude for creating such a wonderful space but to inform the decision makers that they will adversely be affecting their neighborhood if they force Press Coffee to move." We've reached out to Lamar for comment.

Press Coffee officially opened on October 26, 2014 with now-husband and wife team Bronson Holbrook and Natalie Nazarewicz adding a cozy chic spot inside the former carriage house for the Frost Mansion. The spot added a study nook for students from SAC, Trinity and UIW, and a place for neighbors to catch up and caffeinate. The neighborhood went on to use the facility for meetings, dates and family outings (as evidenced by their monthly movie nights).

For Maycotte, an architect who rehabbed a 100-year-old home and joined the neighborhood three years ago, Press was all things.

"Press Coffee is truly a neighborhood hub where I met a lot of friends, where people exchange ideas and work on projects together, it serves students and professionals a like. In a sense it's a micro co-working space. Of and yes, they also serve amazing coffee," Maycotte said in a message.

According to Holbrook, the couple plans to relocate Press as soon as possible.

"The petition helps. Everyone has shared nice words and it makes it approachable to consider opening another location when feasible," Holbrook said.

Though Maycotte expected a few more signatures (the petition has only been up since Monday), his sentiments are echoed in the comment section.

"Not only is Press a fantastic coffee shop, but the people behind it have made that property an awesome entry to Alta Vista. That whole street corner is so much more attractive and vibrant now. Every time I drive past I feel proud to live in this neighborhood. It is a disaster to lose this business and these energetic participants in our community," wrote Cayenne Claassen-Luttner.

Eliana Morales shared, "It’s one of the first dates I had at this amazing coffee shop to my now husband.

Patrick Gallagher joined the chorus by writing, "PRESS is a great member of the Alta Vista community."

Since 2014, the area has seen an uptick in new shops: Edera Osteria opened in 2016, Scratch Kitchen opened in March of this year and Outlaw Kitchens just opened their doors late September.

Press will close on October 22, just a few days shy of its third anniversary.