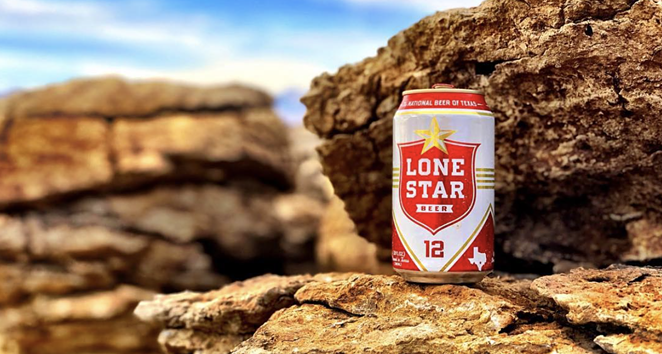 Instagram / lonestarbeer
Home project advice site Workshopedia ranks Lone Star as the most popular ‘trashy’ beer in Texas.
Given the old ad slogan that trumpeted Lone Star as "the national beer of Texas," maybe it should be no surprise that a new report ranks it as the state's most popular "trashy" brew.

Home-project advice site Workshopedia parsed through online searches for more than 30 inexpensive American beers to determine which were most searched for in each state, and therefore, the most popular.

Before diving into the numbers, let’s clarify the report's use of the word "trashy." The authors used it as a synonym for "cheap" or "economical," which allowed it to focus its searches on sudsy stalwarts such as PBR, Budweiser and Miller Lite.

Turns out Lone Star’s original American lager is the most-searched beer in its namesake state. Appropriately, the brand is owned by Pabst Brewing Co., itself headquartered right here in San Antonio.

“With a global pandemic still simmering down, it’s no surprise that drinking has gone up over the past year,” the report's authors write.

“People seem to be going with what they know, sticking to big brands like Natural Light, Michelob Ultra and Bud Light — all affordable, refreshing beverages for a hot summer afternoon,” it added.

Indeed, the real winner here is Anheuser-Busch, which dominated the rankings with its brands listed as favorites for 25 states. The conglomerate's Natural Light brand ranked as the trashy beer of choice in 10 states — the biggest spread for any single brew.