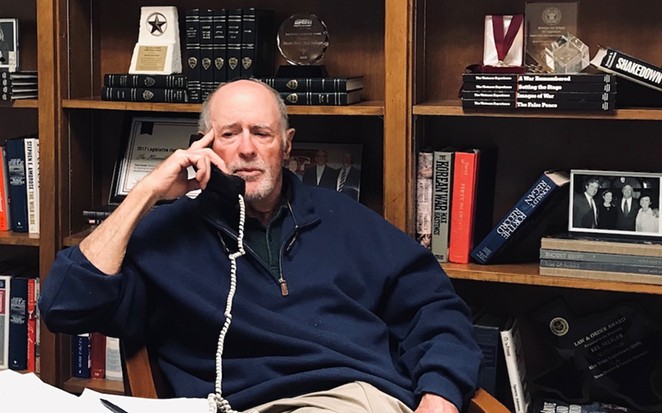 Twitter / kseliger
State Sen. Kel Seilger said he won't run for reelection after the Texas Legislature redrew his district in a way that makes him more vulnerable to a primary challenge from the right.
In a sworn statement given in a federal court case, one of the Texas Senate's senior Republicans said his own party broke federal voting-rights law when it redrew the state's political maps last year.

As reported by the Texas Tribune, Seliger's statement came to light as a three-judge panel in El Paso weighs a federal lawsuit arguing the district was redrawn with the intent of holding back the political influence of voters of color.

“Having participated in the 2011 and 2013 Senate Select Redistricting Committee proceedings, and having read the prior federal court decision regarding SD10, it was obvious to me that the renewed effort to dismantle SD 10 violated the Voting Rights Act and the U.S. Constitution,” Seliger said in his statement.

The filing comes after the Republican-controlled Texas Legislature approved maps last year further entrenching that party's political power while minimizing the influence of voters of color, who are more likely to vote for Democrats.

Latinx people accounted for half of Texas' population growth over the past decade, resulting in two new congressional seats for the state. Despite the significant growth in that population, lawmakers didn't increase the number of Latinx-majority districts.

Seliger himself was a victim of the newly redrawn maps.

In a report calling the moderate Republican "the first victim of redistricting in Texas," the Texas Observer noted that his district picked up new counties likely to favor a further-right candidate such as those backed by Lt. Gov. Dan Patrick and conservative advocacy groups in earlier attempts to oust him in a primary. After the maps passed, Seliger said he wouldn't seek reelection.

Adding further punch to his court statement, Seliger chaired the Senate’s redistricting committee when the state’s maps were redrawn in 2011. A federal court later ruled that the legislature had discriminated against voters of color during that process and forced lawmakers to go back to the drawing board.

The federal government and civil rights groups have sued Texas over its most recent maps, arguing the legislature discriminated against voters of color during their creation. The court challenge to Texas Senate District 10 is being heard ahead of suits over the House and congressional maps, according to the Texas Tribune.