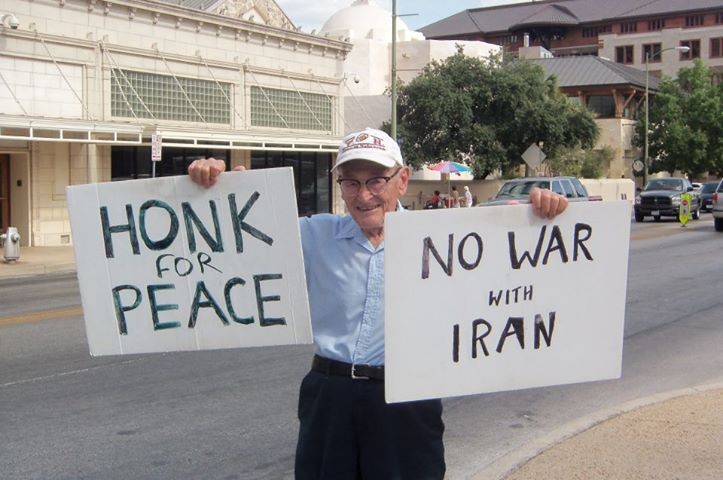 There are men who struggle for a day and they are good.

There are men who struggle for a year and they are better.

There are men who struggle many years, and they are better still.

But there are those who struggle all their lives:

These are the indispensable ones. —Bertolt Brecht

John "Juancho" Stanford was such a man. If you ever attended a local march, protest, a free musical event or any event organized by the community for the community, chances are you met this man Dick J. Reavis accurately described as "gentle giant" in the Current back in 2003. Stanford passed away at his home on September 11, and peace activists in San Antonio and beyond are mourning.

"To all the friends and family of my Father John W. Stanford, it is with great sadness and grief that I write this, but my Father passed away in the early morning hours of Sept 11, 2013 at his house," wrote William Stanford on Facebook. "As many of you have know my father for many years, I'm sure most of you, if not all, know what kind of a man he was and what he stood for and fought for all of his life. At this time, my brother and I are in the process of making arrangements. When this is completed, we will post the information on his page. If anyone needs to contact me, I am in my father's friends list, so you can send me or my brother Charles a message."

"Se murió un gran hombre [a great man is dead]," wrote Graciela Sánchez, director of the Esperanza Peace & Justice Center. "He is one of this world's greatest luchadores [fighters]. Let us all continue to struggle for the rest of our lives just like John did."

"If you ever had the pleasure of meeting my Grandpa, John Stanford, you walked away with a smile on your face," wrote Joshua Stanford on Facebook. "Not only because he was a kind man, but because you could sense the good in his heart. He was my Hero, and I will miss him. I love you Grandpa. Thank you for everything you taught me."

Stanford's smile could melt a rock. And when Che Guevara once said the main quality of a revolutionary was "love," I like to think he meant people like Juancho, whom I met on several occasions. However, I never exchanged more than a few words with him. There was no need. His smile (and the Socialist Worker magazines he seemed to carry with him and distribute freely at all times) were a comforting sight: here was a man who wasn't going to give up, no matter how dark the times were getting, but whose main fuel was love, not hate. And that love made him immortal for fellow fighters of all ages.

"I am so sad to hear this," wrote on Facebook Melissa Ruizesparza (Saakred), who could've been his grandaughter. "Beautiful John 'Juancho' Stanford, thank you for all you were, all you did, all that you leave for us to live up to. We love you and will miss you dearly. You will never be forgotten."

You can (and should) read more about this remarkable man. The Current published stories on him in 2003, 2007, and 2008, and in 2010 Stanford tied for third place in the Best Local Activist category of our annual readers' Best-of poll.

Rest in Peace, Juancho. And thanks for not giving up.